Well it's been a while since I've been able to post up anything but new lists, rules etc but my life has finally settled enough that I can start playing a few games.

Back in December 2017 a couple of mates and I had the first game in my Zealand Campaign.  I’m not expecting anyone to remember that (I barely could) but if you want to read about it, you can find some background information here, copies of the Operational Orders here, the pre-game and table set up here, and the After Action Report here.

In a nutshell, WW3 began on 7 July 1986.  Today’s date is 16 July 1986.  Polish Airborne and Naval Infantry landed on the Danish Island of Zealand yesterday near Ringsted and Koge respectively.  Earlier this morning elements of the Soviet 336th Naval Infantry Regiment started landing at the small port of Faxe Ladeplads, to the south of Koge.

In Game 1, the assault elements of 336 NIR set out to establish a beachhead.  Driving inland they came across the first significant Danish resistance to the East of the town Faxe.  A small delaying action ensued with the Danes withdrawing to the West.

Both sides had incurred casualties, with the Soviets loosing 4 BTR-60PBs plus a couple of 9P148’s (BRDM-2s with Konkurs ATGMs).  The Danes lost less in terms of numbers, but more in terms of need.  They lost a M41 Recon tank and a Centurion Mk 5/2DK.

1.         Immediately continue the attack with what you have at hand
This option gives the Danish player no time to dig in at the next line of resistance, or replace losses and we will treat the game as a Flanking Attack.  However, your force will be similar to Game 1, minus 4 BTR-60s and the 2 Scout Cars with missiles (all losses from Game 1).  The battle will take place along the 154 road from Faxe to Ronnede.

2.         Reset Force, allow units to reconstitute back to full strength
This option will mean that the Soviet forces will not pursue the Danes until about ½ an hour after the first encounter as you sort out casualties, replacements and new units.  It means the Danes will have had time to set up minimal defences and maybe replace some losses.  Your force will be similar to Game 1, fully reconstituted from Wave 1 reserves.  The battle will take closer to Ronnede, at a place of the Danes choosing and the game will be a Hasty Defence.

3.         Allow 1st Wave follow-on forces to take over the attack while force from first contact take over the town of Faxe
This option will mean that the Soviet forces will not pursue the Danes until about an hour or more after the first encounter.  It means the Danes will have had time to set up reasonable defences and replace their losses.  Your force will be tank heavy, with a complete Infantry platoon attached.  The battle will be a Deliberate Attack and the Soviet player will have a choice of approaches to Ronnede.

The next choice to make was for the Danish player.  I had a good look at the satellite Google map of the area where the game would now be played and selected two likely spots that offered some defensible terrain – at least to my very unprofessional eyes.  I created two possible game maps from the image and asked the Danish player to select one to defend. 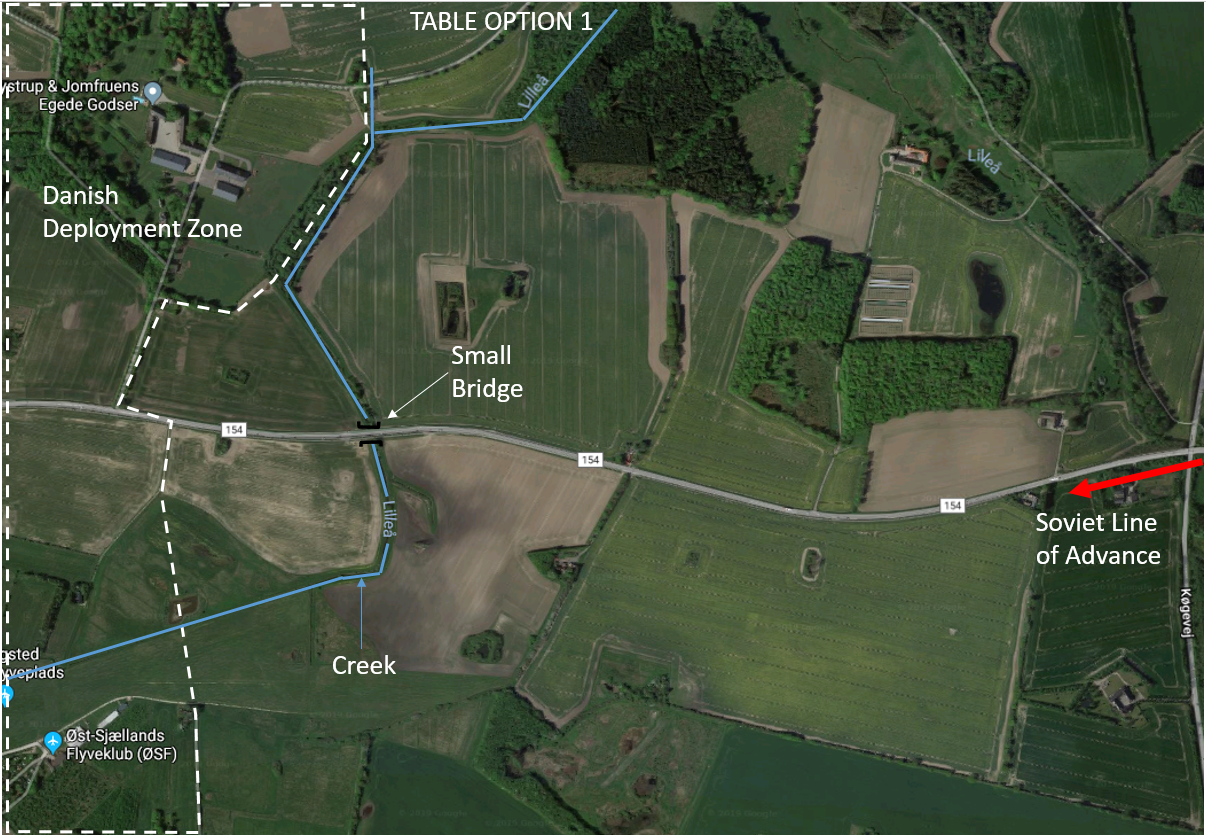 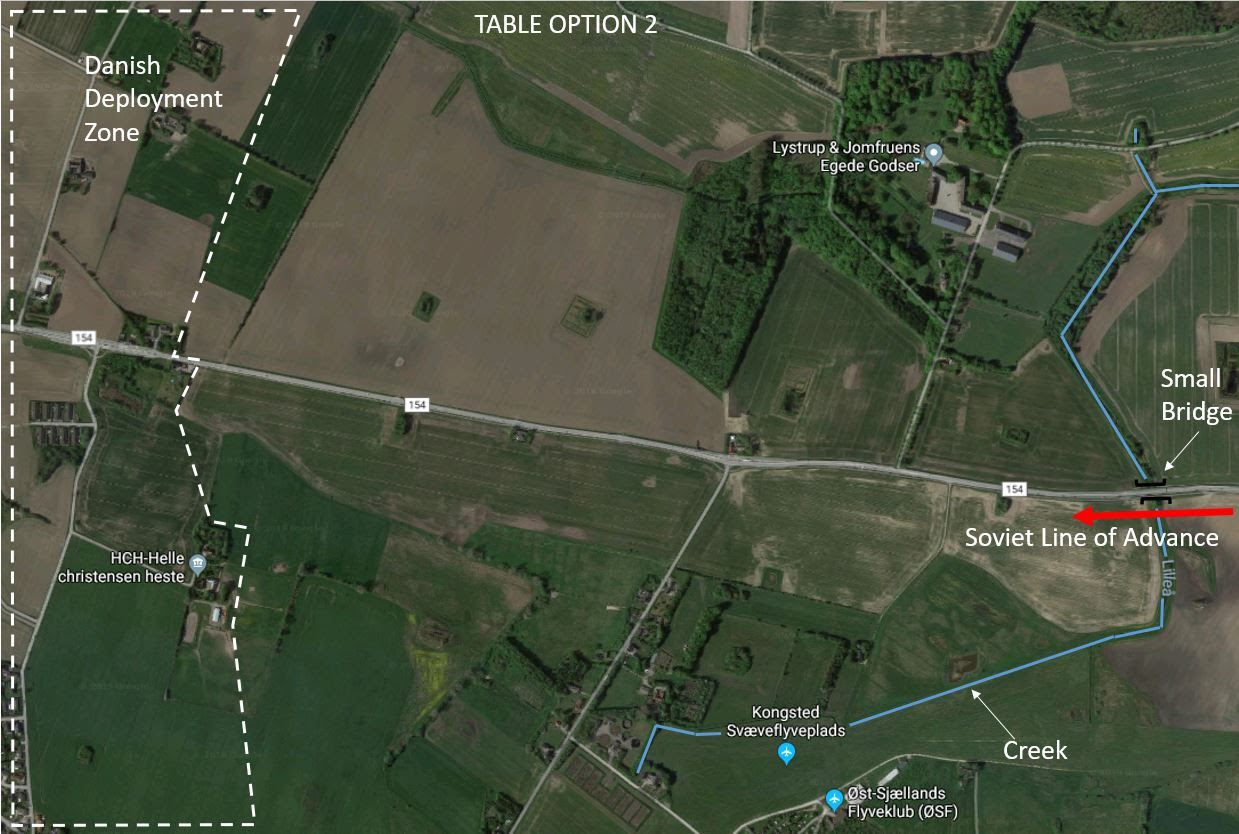 The Danish player selected Map 1 and then I offered him the engineering choices I had previously selected from the Danish Defences options.  I choose only those things that would have taken the engineers limited time to prepare (or perhaps in the case of the bridge they had been preparing it for a while).  Here are the options I presented to him.

The Danish player selected the option to blow the bridge (actually I think more of a culvert) and the off table TOW shot.

Then I prepared the mission which I’ve copied in full below:

Situation Report
Following the earlier engagement, Danish forces have retreated further inland with the Soviet’s right behind them.

Knowing the area well the Danish Commander has chosen another spot to defend with the remnants of his force.  The more time he defends, the more time other Danish reinforcements have to insert themselves between the Soviet Naval Infantry and the Polish Paratroopers, and secure the main highway to Copenhagen.

The Soviet Commander has orders to push inland as fast as possible and secure the MSR.  Time is of the essence, and any delays will prove costly.

Terrain
The 154 road from Faxe to Ronnede runs along the centre of the table.  There is also a secondary road the runs into the Danish deployment area.  The rest of the table is covered in farmland with a small stream running across the table crossed by a bridge.

It has been raining consistently for the last few days and the land is more boggy than normal.  All vehicular off road travel should subtract 1D6 from the movement rate.  On a “Top Speed” order two rolls of a “1” indicates the vehicle is bogged.

Victory
The side that exceeds its Battle Rating must withdraw and losses the battle.  The Danish Player cannot claim an All Objectives Secured victory, but the Soviet player can.

Special Rules
Low Cloud Cover
If an aircraft chit is draw, the aircraft becomes available on a roll of a 6+ rather than a 5+

Pursuit
For each 3 Soviet units that leave the table through the Danish player’s table edge, the Danish Player must take an additional BR chit

Time is Pressing
The Soviet’s do not have much time to remove this obstacle to their advance.  If at the start of turn 5 the Danes are still fighting, the Soviet Player must take a BR chit at the start of each of his turns.

If the Danish forces are still fighting at the beginning of turn 10, the Soviet Player must take two BR chits at the start of each of his turns until the end of the game.

Deployment
1.         The table sides each force will deploy in are shown on the map

2.         Place Objectives
Place D3+1 objectives on the table.  The first objective is the road junction.  The second is the bridge.  After that the Soviets place and next objective and then the Danes.  Repeat as required

3.         Determine the Defenders Initial Forces and Deploy
At the beginning of the game, place the Danish player’s defences and D6+6 units on the table, anywhere in the Danish deployment zone.  Any units not deployed as the Dane’s reinforcements.

5.         Deploy Attacker’s Initial Forces
The Soviet player then places all Recon units and 2D6+6 additional units.  These may be deployed up to 10” from the Soviet table edge.  Any units not deployed are the Soviet’s flanking force.

6.          First Turn
The Soviets are attacking and automatically have the first turn.

At the start of Turn 4, start rolling for the arrival of the Soviet flanking force.  On a 4+ they arrive and D6 units are placed on the northern or southern table edge, within 10” of the centre line (as written down).  They can then be given orders as normal.

D6 units will continue to arrive on each subsequent turn until the entire flanking force is on the table.

From the start of Turn 2, roll a D6.  On a 4+ Danish reinforcements have arrived.  D3 units may be placed on the Danish players’ table edge and can be given orders from there.  D3 units can arrive each turn until all Danish units are on the table.

So all that was need now was to set up the table according to the photo and get on with it.