I've been incredibly busy lately - both at work and at home, so have had literally no time for my own hobby work.  However I did see that the next issue (or current issue) of Wargames Illustrated was to be on modern warfare - with at least some coverage of the Cold War Gone Hot theme. 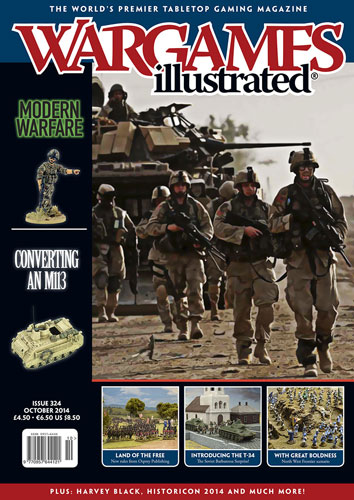 As I knew I'd have difficulty finding it in Oz, and I've been relatively impressed with how they are putting together their ipad versions of the magazine - I decided to download.  In Oz this is also a cheaper option.

Like most wargaming magazines, Modern Warfare is a theme - so amongst the other articles there are about 5 articles that have somethingt o do with that theme.  They are:

1.  Whatever happened to 20mm Moderns? - This is quite a clever photo-spread article covering 1 wargaming club in the UK and their various 20mm modern collections/games.  It provides a little commentary, plus lets the reader know what manufacturer vehicles and miniatures are used etc.  It covers a Yom Kippur battle, a standard Soviets vs Brits CWGH engagement, Russians vs Georgians in South Ossetia and another Israeli led skirmish in 2013.

The article has loads of pics - which somewhat annoyingly continue to scroll through whilst you are trying to read the blurb.  I found that a little distracting - but like most WI articles - beautiful pics. Interestingly the bottom line from the article is that 20mm moderns are alive and well and are a great to game in.  Totally agree!

The article also includes an outline of a new game Third Generation Warfare - more info about it can be found here.  It looks very interesting.

2.  Setting the scene for the Cold War Turned Hot - This is a kind of two part article.  Part 1 is a small article by Harvey Black - author of The Red, Blue and Black Effect trilogy.  It talks about why he is facinated in the CWGH period.  The second part is the outline(?) of a Soviet river crossing scenario.  It is not for any particular game, and on my ipad it has no map, force list etc etc.  In fact I kept swiping this way and that, trying to find the rest of the scenario....

3.  Missile Away! - This is an excellent article on Modern Naval Warfare - including rules and miniature choices.  Modern naval gaming holds a special place in my gamer heart so I very much enjoyed this article.

4.  Converting a 15mm M113 to a M113A3 - I've only briefly looked at this article as I don't operate in 15mm, however it would certainly be useful for anyone who does (and could be bothered doing the conversion).  The end model is lovely - so he does a great job.

5.  20 Years From Now - Not exactly what I expected, but again an interesting article thinking about how to wargame a conflict around 2040 or so, going into what figures, vehicles and rules you could use.  A good read.

So all up - it was great to see so many of the vehicles and manufacturers I support in another wargaming magazine - so more and more gamers can see how good their products are.  As I learnt from the previous magazine I reviewed, you're not going to get a comprehensive, everything you'll ever need to know look at a CWGH in 1 magazine.  But I see it as spreading the good word so I'm all for it.  It still had some articles that I was a little disappointed with - like the scenario - how hard is it for magazine to publish a playable scenario with maps etc for CWGH!!??

Anyway - I rate it 7 out of 10 (again) but consider it well worth getting.

Right - time for a bot of a change from the Bundeswehr - back to the old BAOR.  This time I've finished a couple of S&S Models Spartan MCTs.  Essentially these were CVR(T) Spartan's with a Milan Compact Turret added.

The S&S Models are have resin bodies and tracks, while the MCT turret is metal.  Metal smoke dischargers were also included.  Very simple to put together - and straight into the painting.

These are painted in my standard BAOR paint jobs.  Sprayed black, rolls of blu-tack added, then sprayed with PSC British Armour green.  Pin-washed with Vallejo black wash, and dry-brushed up from there.  Are are the finished vehicles: 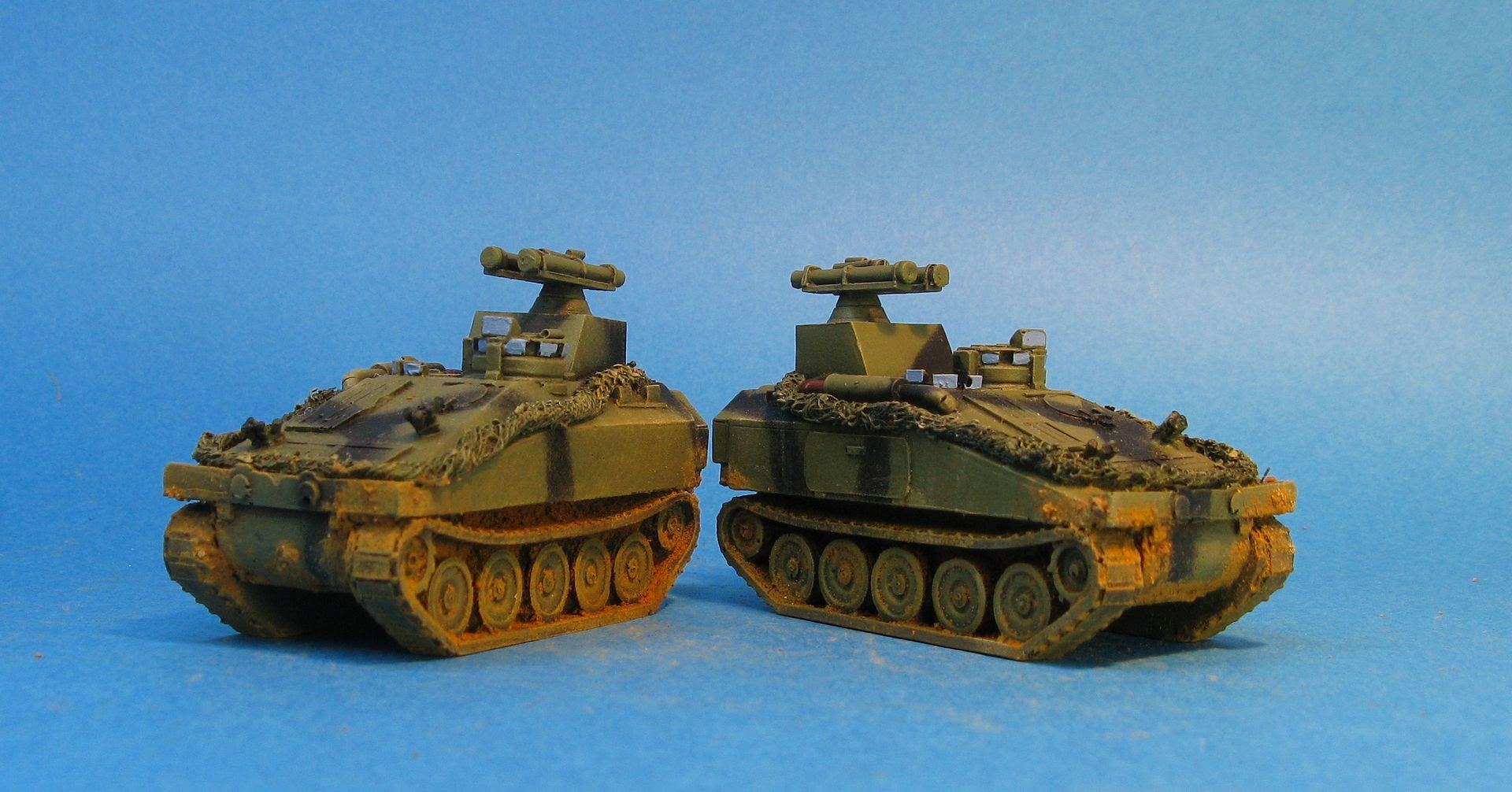 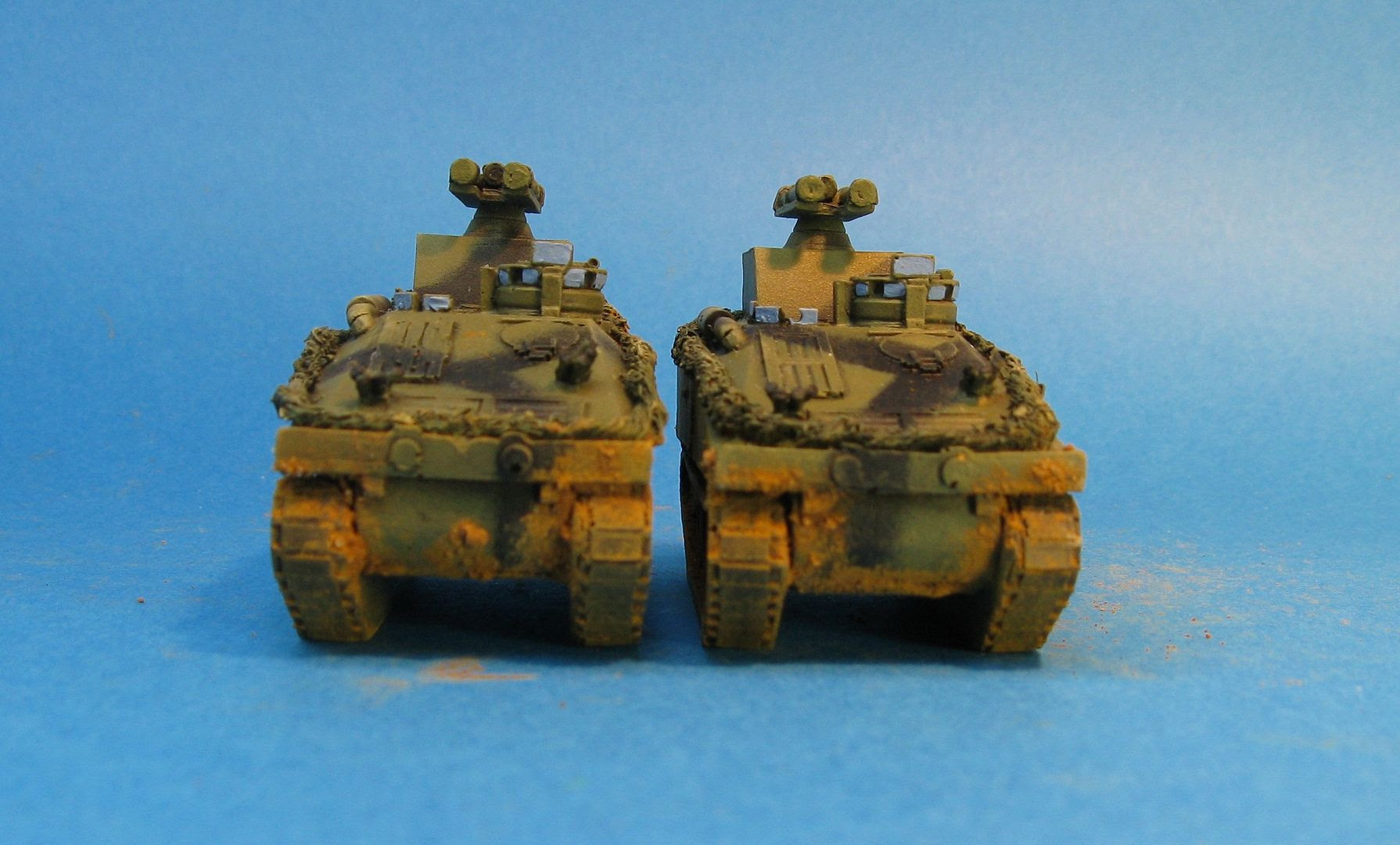 That's it - thanks for looking