I'm sure like most of you, the last 18 months plus have been both trying pretty weird.  I've been very fortunate in that I have a reasonable job in the Health Department and can quite happily work from home - which I have been doing since March 2020.  I've made it into the office probably 5 times since February 2020 - and I am fine with that.

I'm fortunate that both my wife and I a fully vaccinated, and neither of us mind spending a lot of time at home.  The dog thinks this is exactly how life should be and gets very confused if I disappear for longer than about 10 minutes.

So whilst I've been locked down for long periods of time - or at least living as if I was 90% locked down anyway - I not had loads of free time to twiddle my thumbs or complete all my many unfinished projects - I've had to work.

I have managed to paint a few things - mainly for others and I think I've played 1 game since 2019.  It was the world's fastest game of Cruel Seas where my freighter was sunk at the beginning of turn 2 -and since that was the primary objective of my opponent, that was that.

Added to that mix we've been planning on moving home to New Zealand for a number of years now - so much of my free time has been preparing for that.  That has meant slowly packing up all my toys and day after day of rolling tanks up in bubble-wrap.

Then our house went on the market, was sold and then we entered lockdown again.

So needless to say I haven't had much time or energy for this blog - so I just wanted to say that it will be back - and hopefully once we finally move and settle down again - I'll have more time to focus on the things I enjoy and that includes doing some gaming, model making and figure painting.

I wish you all the best and hope to be back sooner rather than later.  That's all for now.

A few years back, I stumbled across some very cheap Airfix Centurions in a bargain bin at an excellent Hobby store in Newcastle (Australia - not the UK).  At the time I already had 3 Centurions, and a pretty detailed list in my head of what I wanted to purchase at the store.  Centurions did make an appearance on the list.  I stood there for 5 minutes trying to decide on picking them up or not.  Eventually I reasoned to myself - I'll never need more than 3 Centurions - and went and bought the stuff I had planned.  I've regretted that decision ever since!

So when I started 3D printing, Centurions were high on the list of things that needed to get printed.  Here's a little sample:

Very meaty models.  The STL's can be found here.  I printed 4 standard Centurions, 3 with side skirts, 1 without.  As you can see below:

I then printed a Centurion with a dozer blade.  This was going to be my 2-I-C's vehicle.  Unfortunately here I had some issues.

It took me a while to figure out what was going on (it turned out to be some resin had spilt onto my LCD screen) and eventually I was able to print the final Danish Centurion.
Next step was to add the Light Intensification sighting system the printed Centurions, adjust the mantlet to fit them, by scraping it down quite a lot, and then cover the mantlet in greenstuff to look like a canvas cover.
Here is the planned Squadron.  It is a short Squadron, in that I plan to replace the missing troop with a Mechanised Infantry Platoon.  Hopefully you can see the IL systems next to the barrels and the greenstuff covered mantlets. 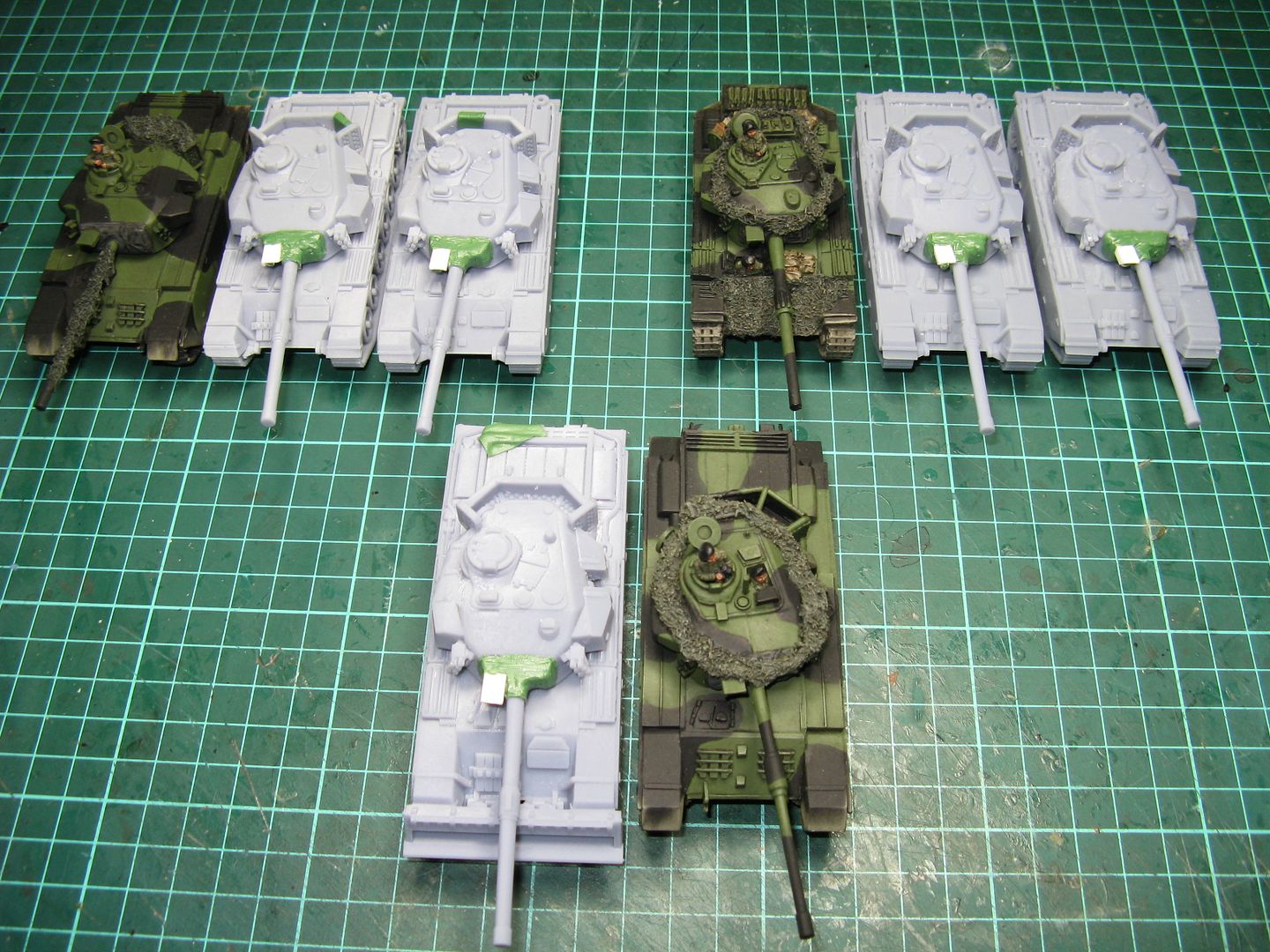 Next step was to deal with the cam netting and stowage

Then everything got a coat of black undercoat 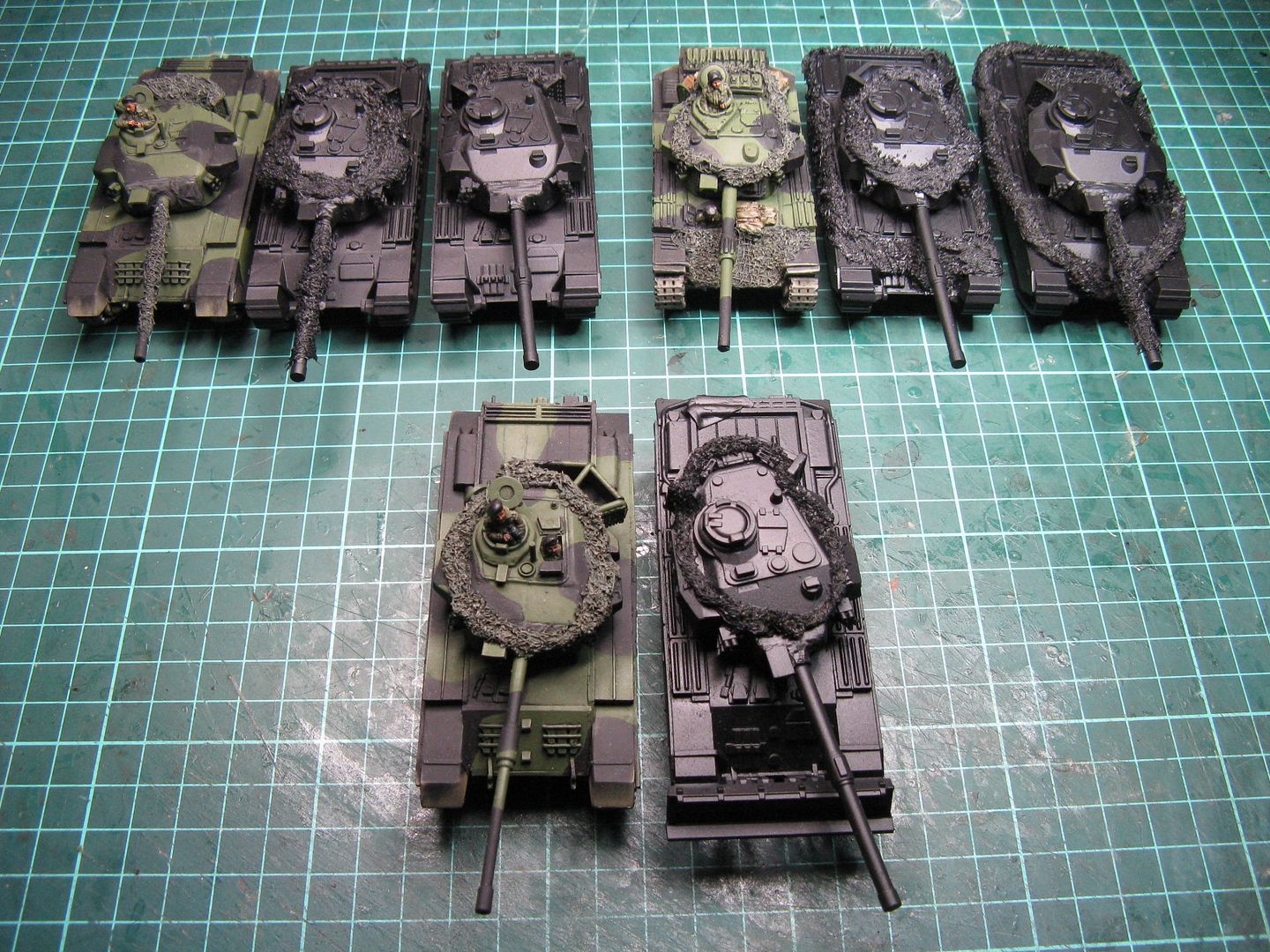 Then the blu-tack came out:

And the next coat of spray.  This time I used a Tamiya aircraft spray AS-23 Bright Green (Luftwaffe).

Peeling off the blu-tack we are left with this:

As you can see, AS-23 is quite different green to my final colour - but I don't mind it as a base colour.
Part 2 will cover the painting...  Coming soon.
Thanks and stay safe
Richard
Posted by RichardC at 3:22 PM 2 comments: