Ever since I read Team Yankee many many years ago I wanted to have a model of a FIST-V.  So, when I found I had 3 M901 ITV models, rather than the 2 I thought I had (a long story), I decided to convert 1 into a FIST-V.  If you want to find out more about the M981 you can look here.

Basically this meant slightly remodeling the front face of the Hammerhead - to include the sights etc, but delete the TOW tubes.  I probably could have done more - but with my basic modelling skills I thought what I did was enough.

A warning - I also tried to write something in chalk on the Hammerhead - I'm not real happy with it and will at some point try and get rid of it and have another attempt - using a different brand white pencil though...

So onto the pics: 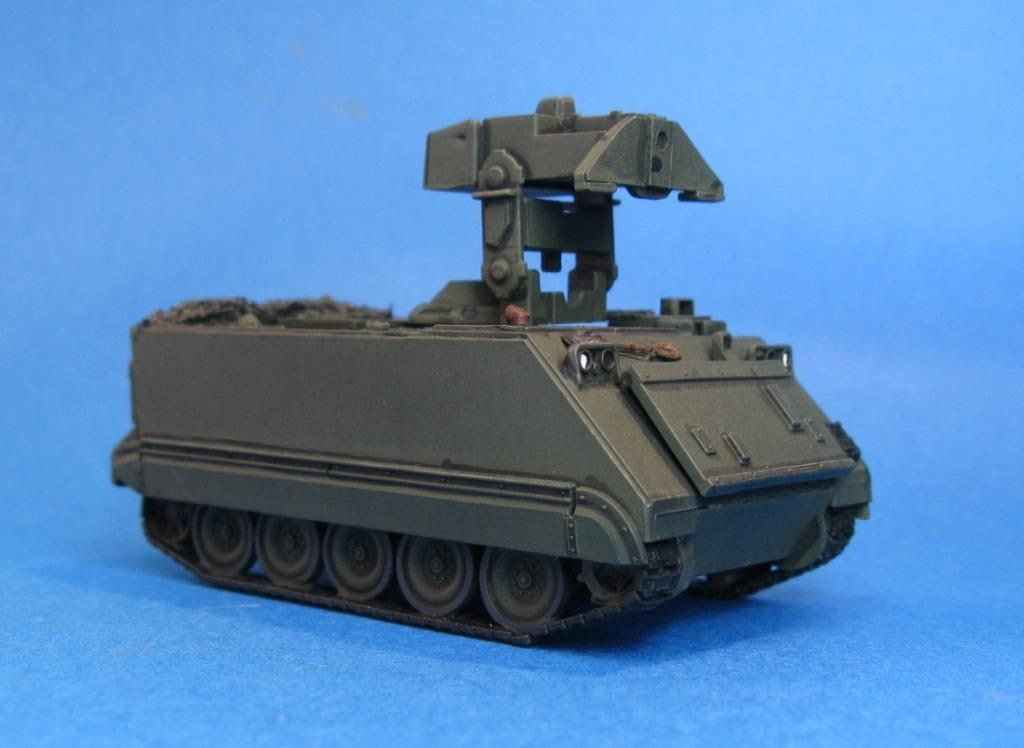 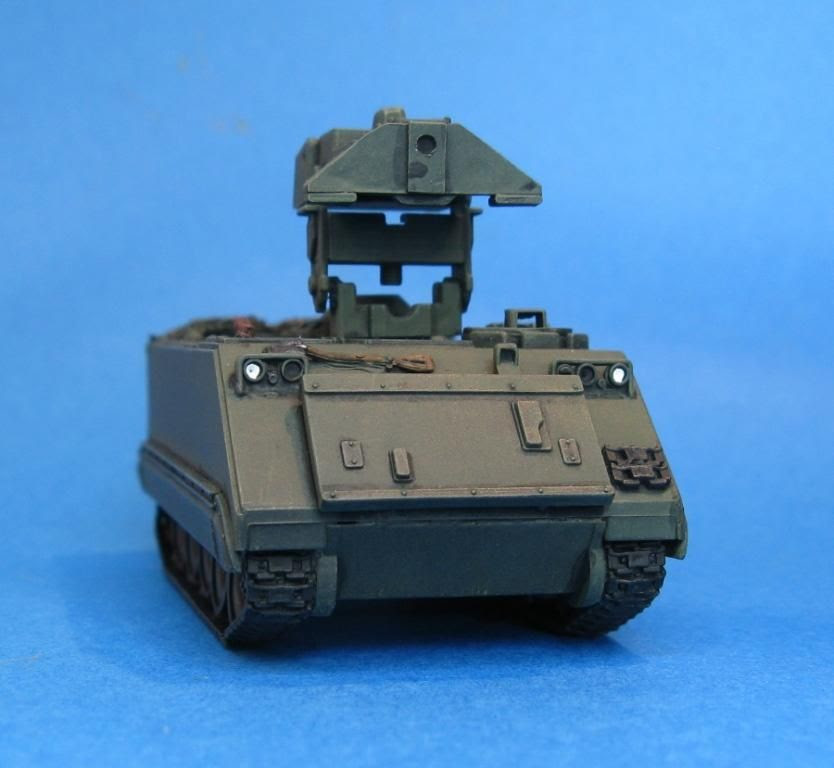 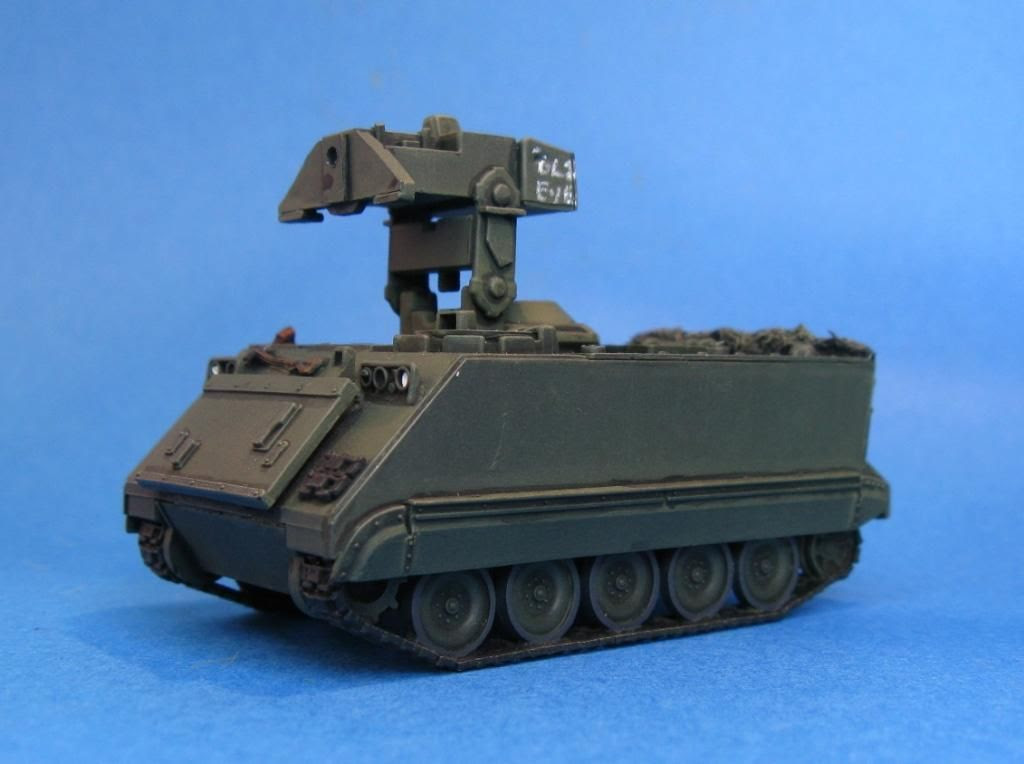 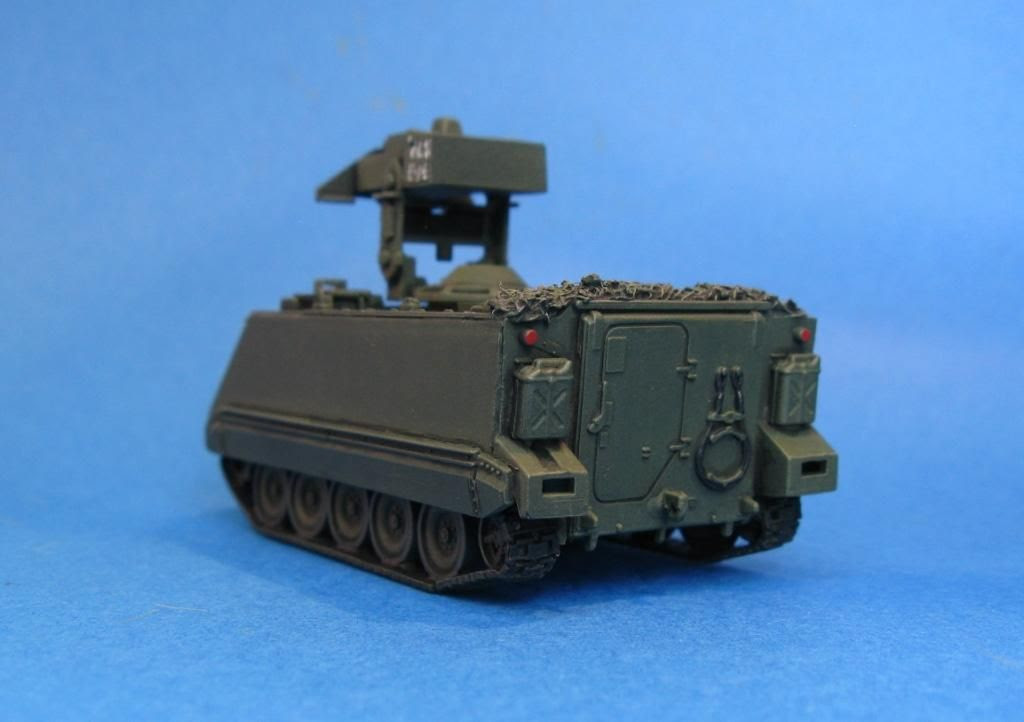 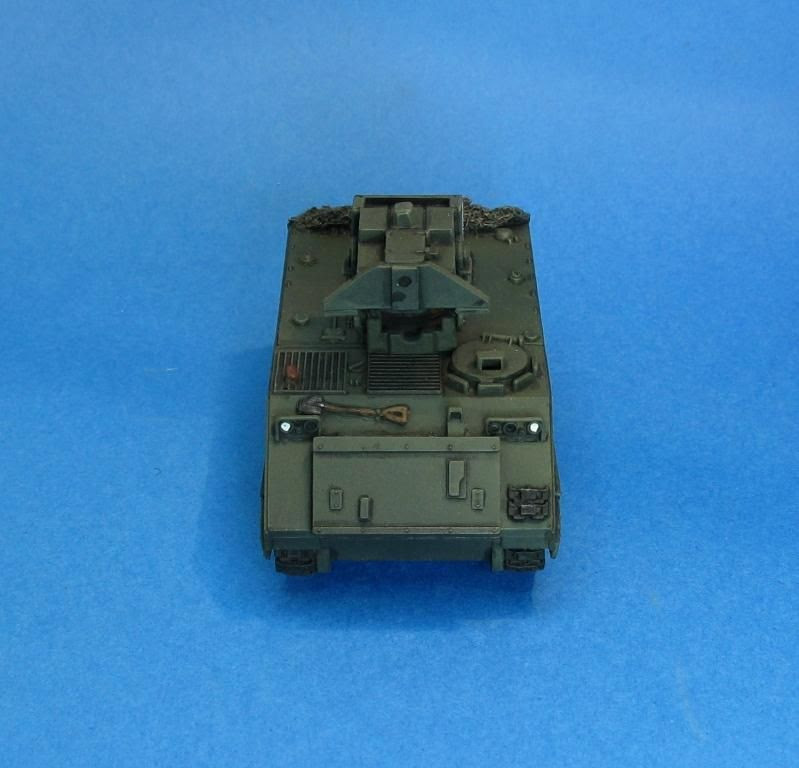 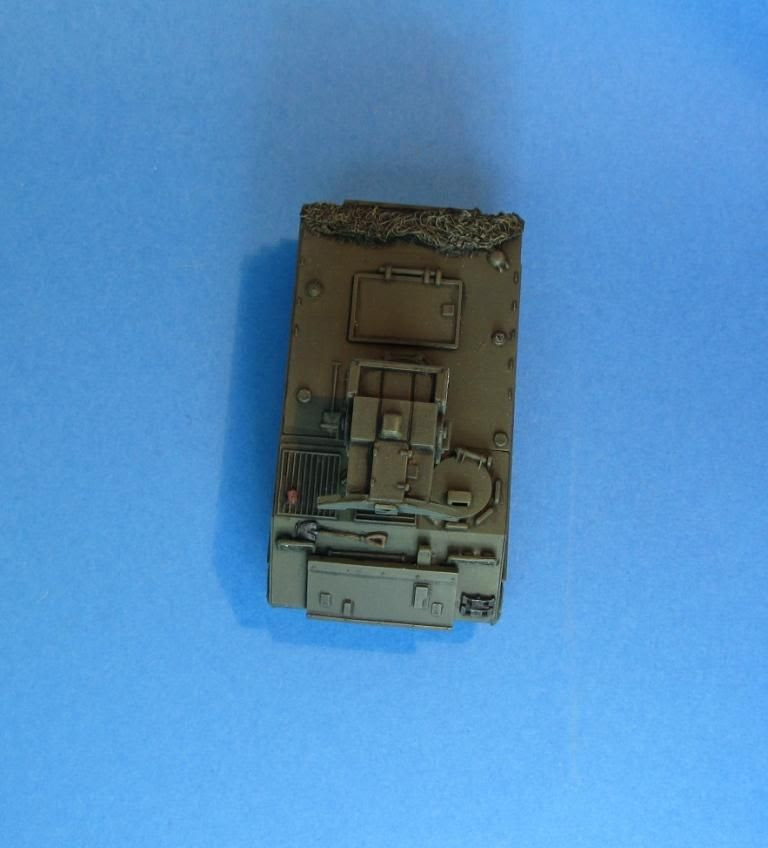 Thought I'd post up some group shots as well now - but before I do, some details on the platoon.  All 4 of these M113 are S-Model kits. Stowage is a mix of Value Gear, Black Dog, Milicast, Airfix (1 item) and the spare wheel and track links come from an old Esci M113 kit. Cams nets are mostly hand made, with 1 from a mate - so no idea where it came from - Germany I think?

Crew are all Wee Friends, sold by Friendship Games (or Models) on ebay and they have their own website. Dismounts poking their heads out of a hatch on one of the M113's are Preiser figures.

On to the photos: 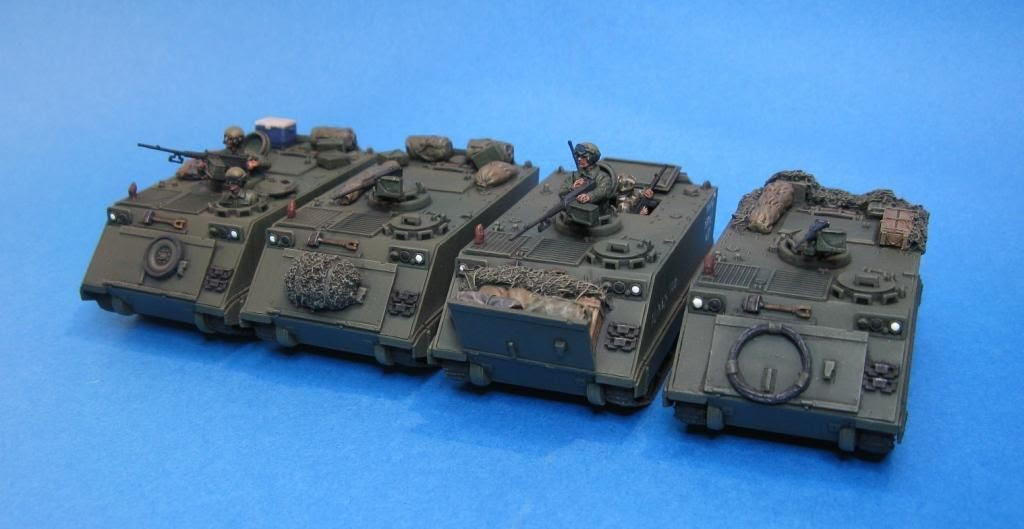 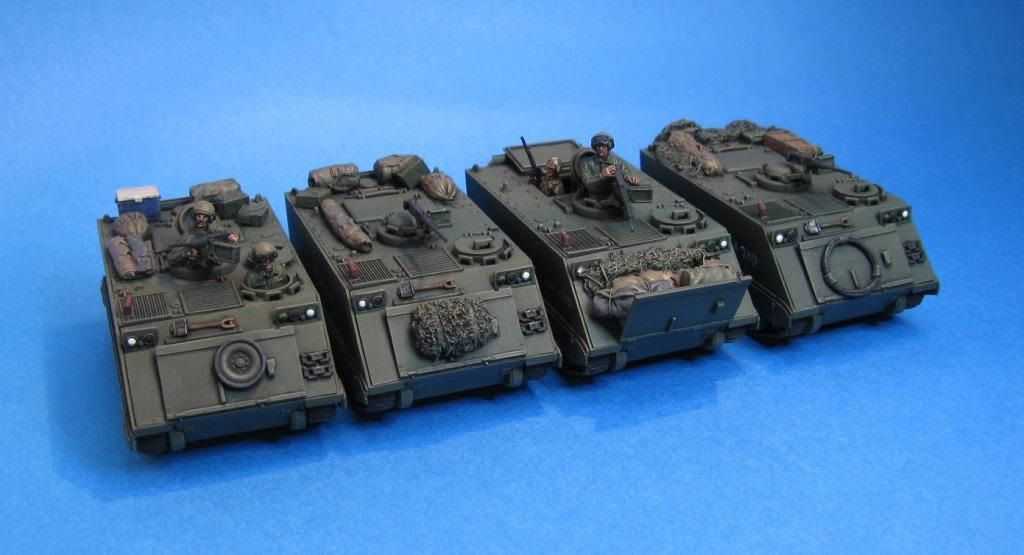 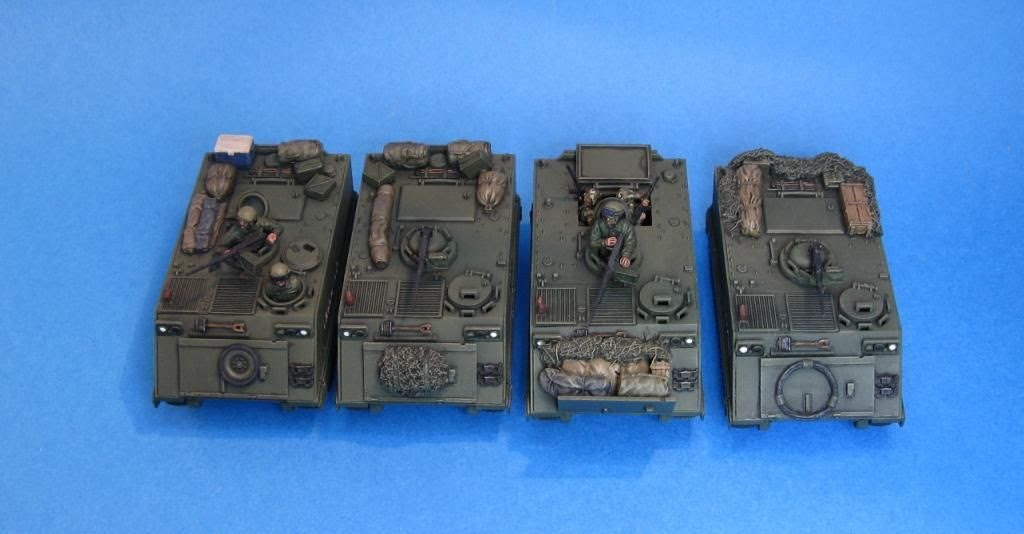 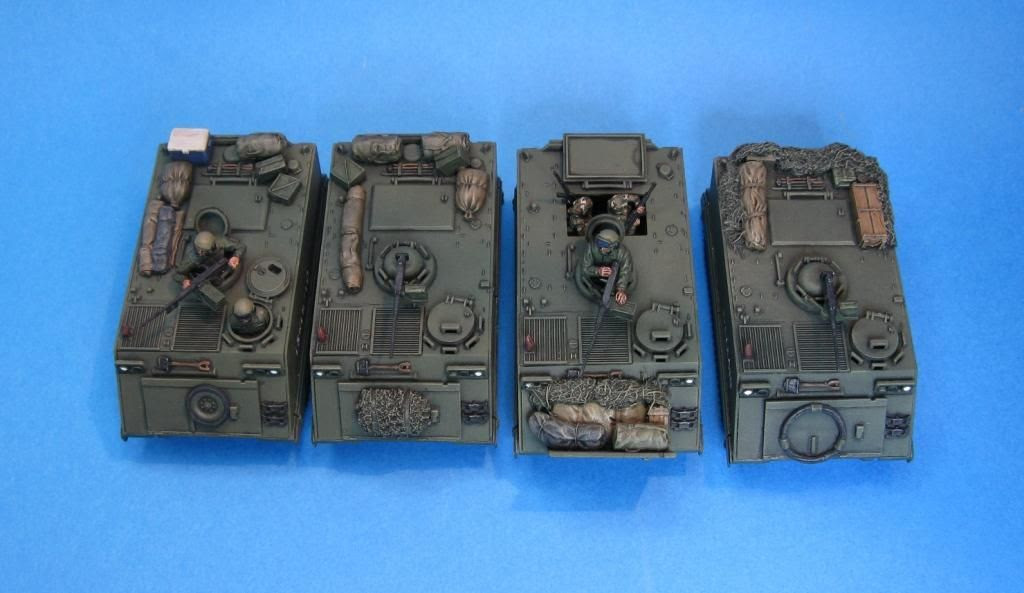 Ok - well this post took a little longer to come along than I expected.  Settle in for a story...

A couple of weeks ago I have a completely free, non-humid Saturday afternoon and decided - what the hey - I'll break out my airbrush and put a base coat on all my made, stowed and undercoated M113s.  A simple exercise - despite not using my airbrush for a couple of years!

Earlier - after much investigating - I had bought a bottle of Lifecolour UA 006 Green - which is supposedly the absolute 100% best colour to represent Forest Green - which is the base colour of all my US Vehicles.

I set up my table in the garage, set up the airbraush, collected all teh bits and bobs I need to airbrush (massive logistical exercise everytime I use it - hence not using it for several years) and then went to get the paint.  2 hours later, after searching high and low in my office - no Lifecolour paint.  I could not find it for love nor money.

In the end, desperate to do something, I grabbed a bottle of old GW Catachan Green and headed down to the garage.  This was another colour I had read did a decent job of looking like Forest Green.  years ago, some 15 yr old shop assistant had told me not to use Tamiya airbrush thinner with GW paints - instead use demineralised water.

I spent the next hour or so in a fairly frustrating attempt to airbrush GW paint, thinned with expensive water (you can't drink), onto an increasingly small number of M113.  I then decided to give up, and when cleaning my airbrush with the afore-mentioned Tamiya airbrush thinner, I decided to give the GW paint 1 more go, this time use the Tamiya product to thin it.

Needless to say it then went on like a dream - but I had run out of time, and I was starting to run out of paint... so I sprayed as much as I could in the time remaining, packed up and went inside.

Obviously I found the life colour paint (which appears to be completely different to the GW paint) several days later.

So the base coating was largely done, and I've spent the next two weeks getting to this point.  Only slight weathering has been added - now it's to humid again to spray varnish - so more weathering will be added at some stage. 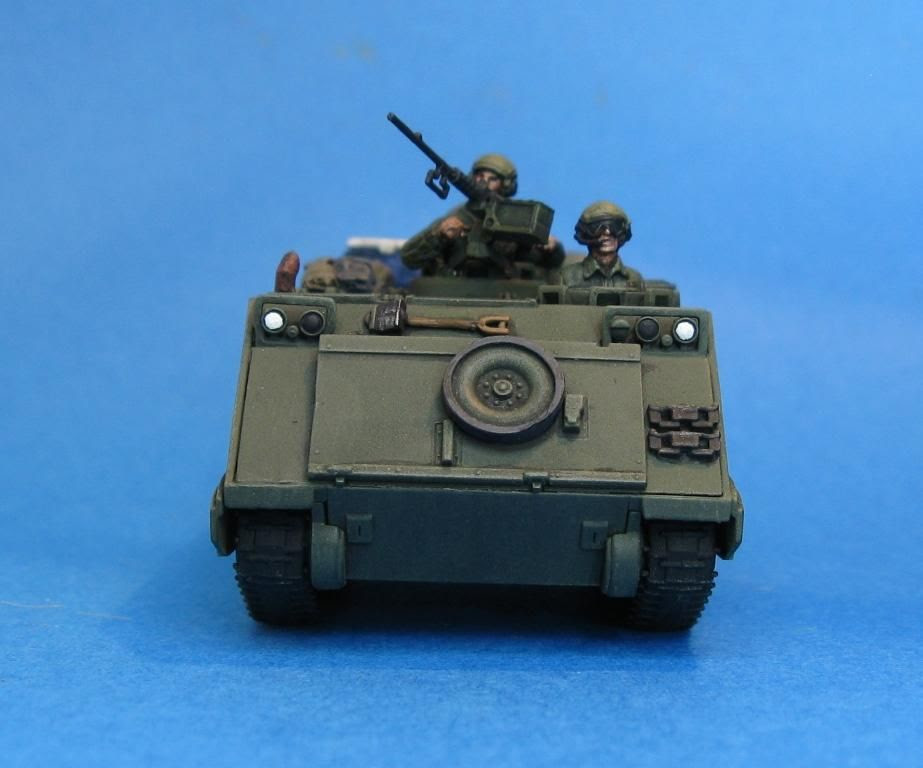 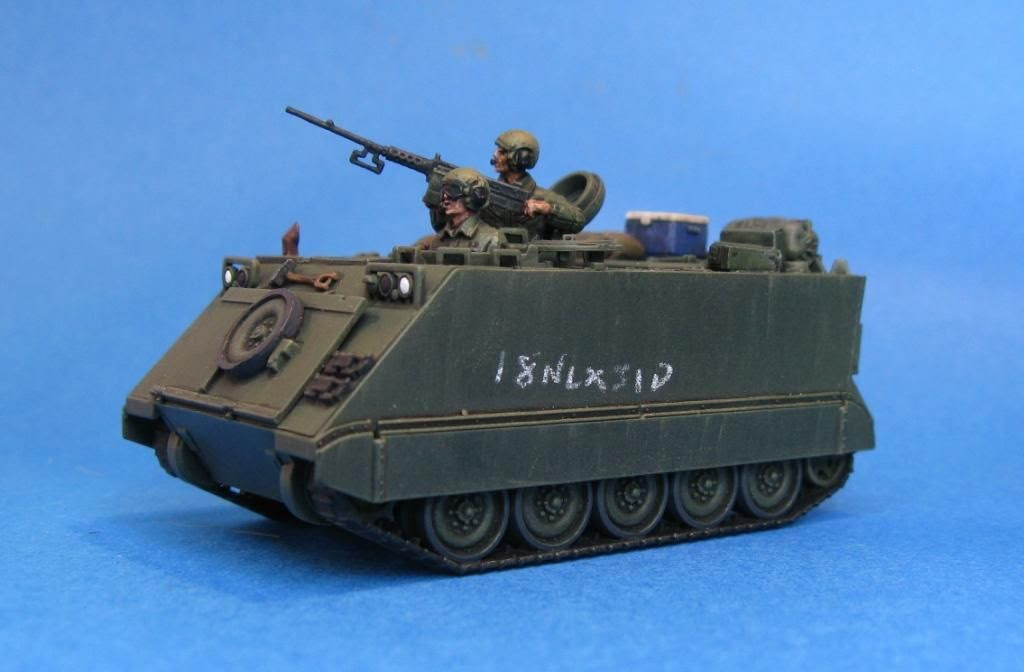 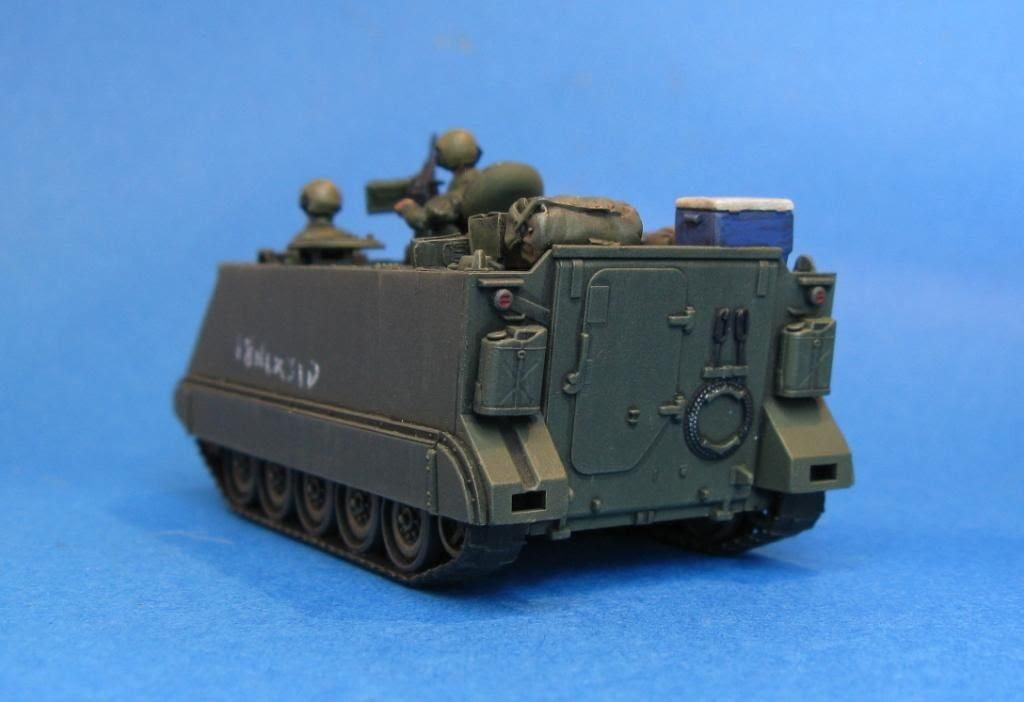 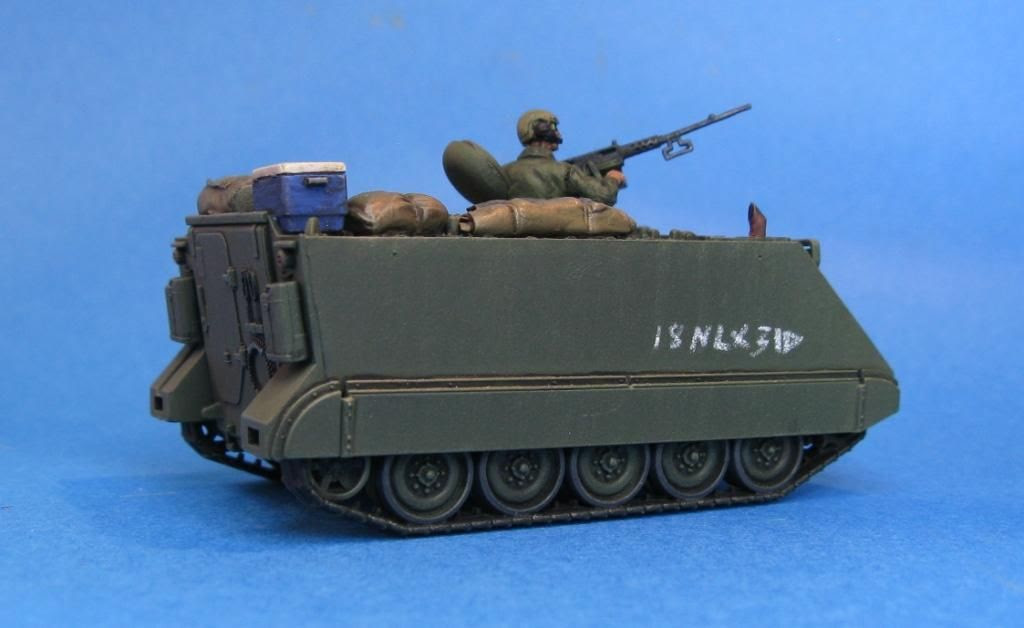 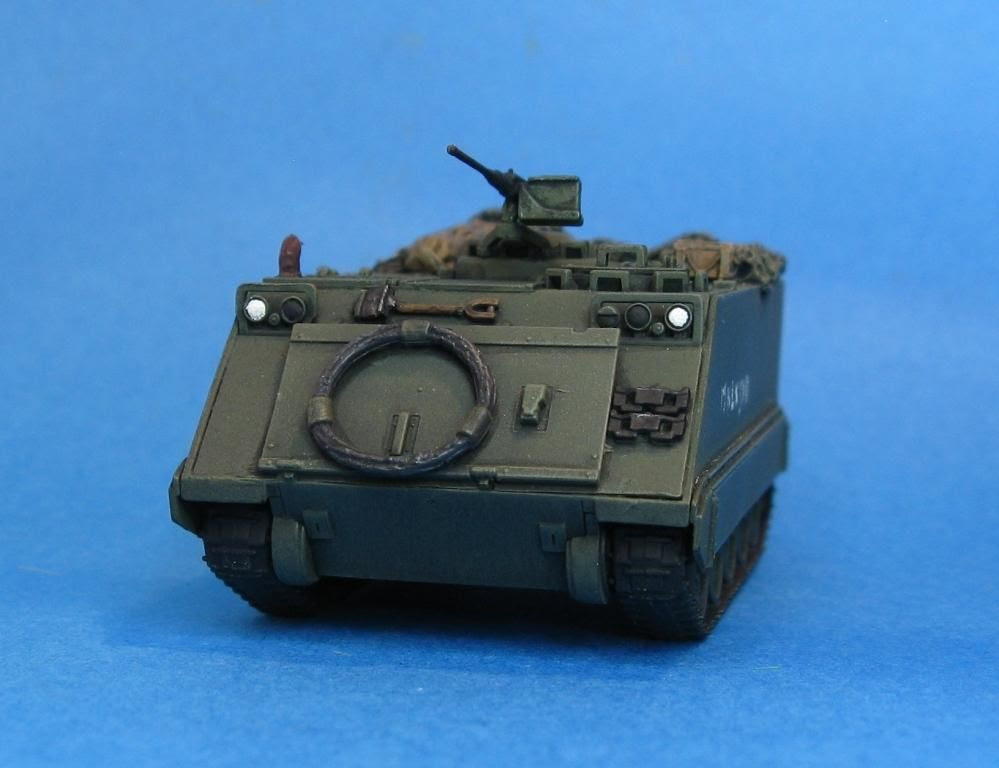 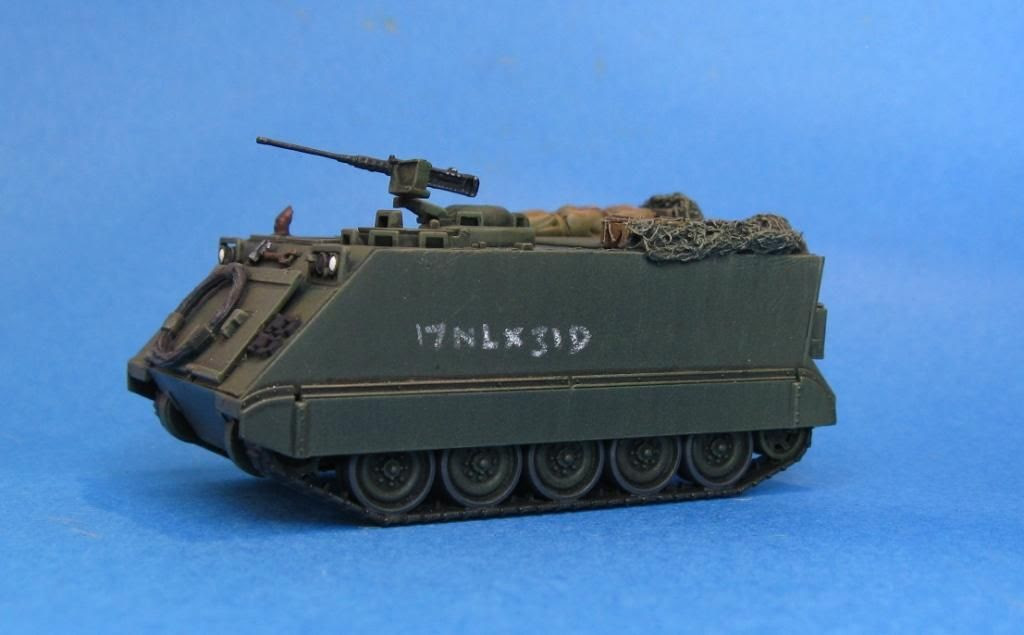 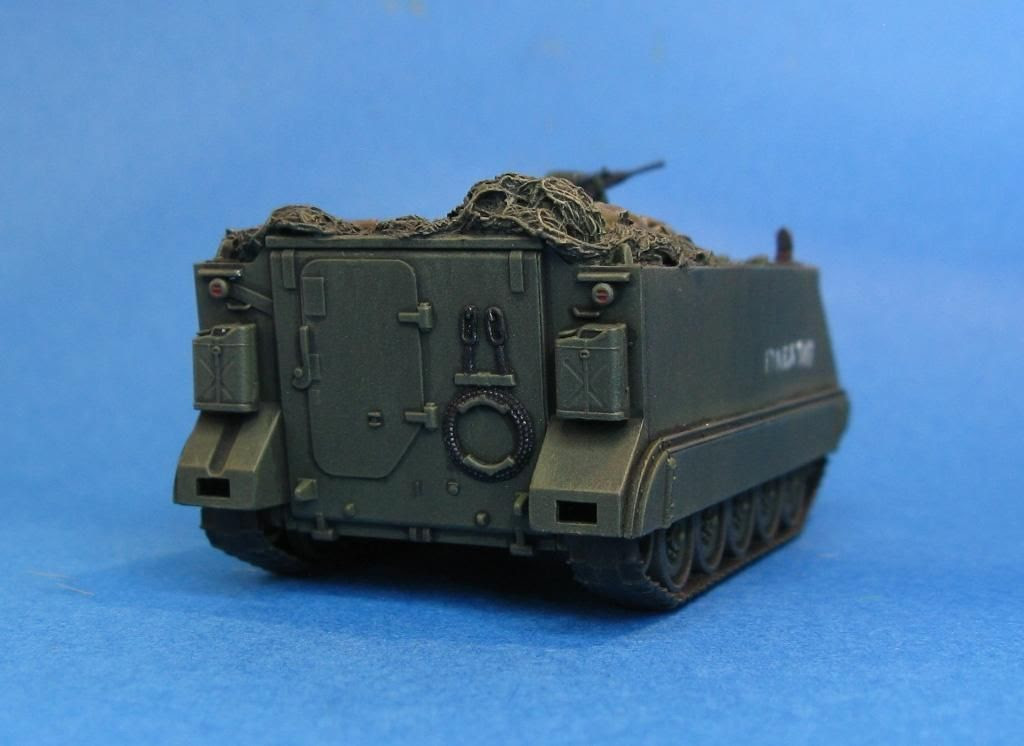 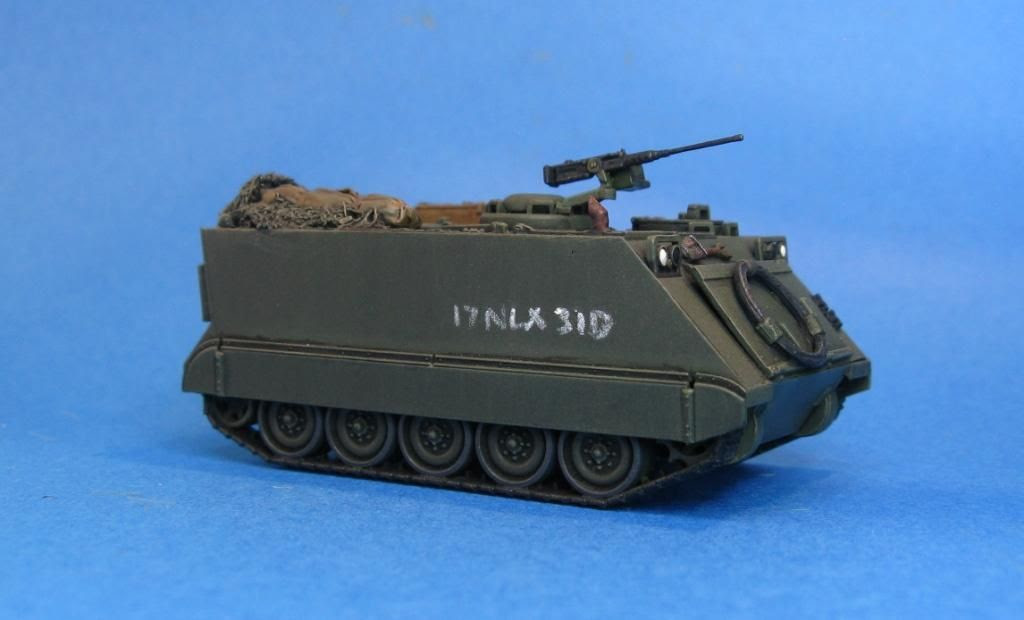 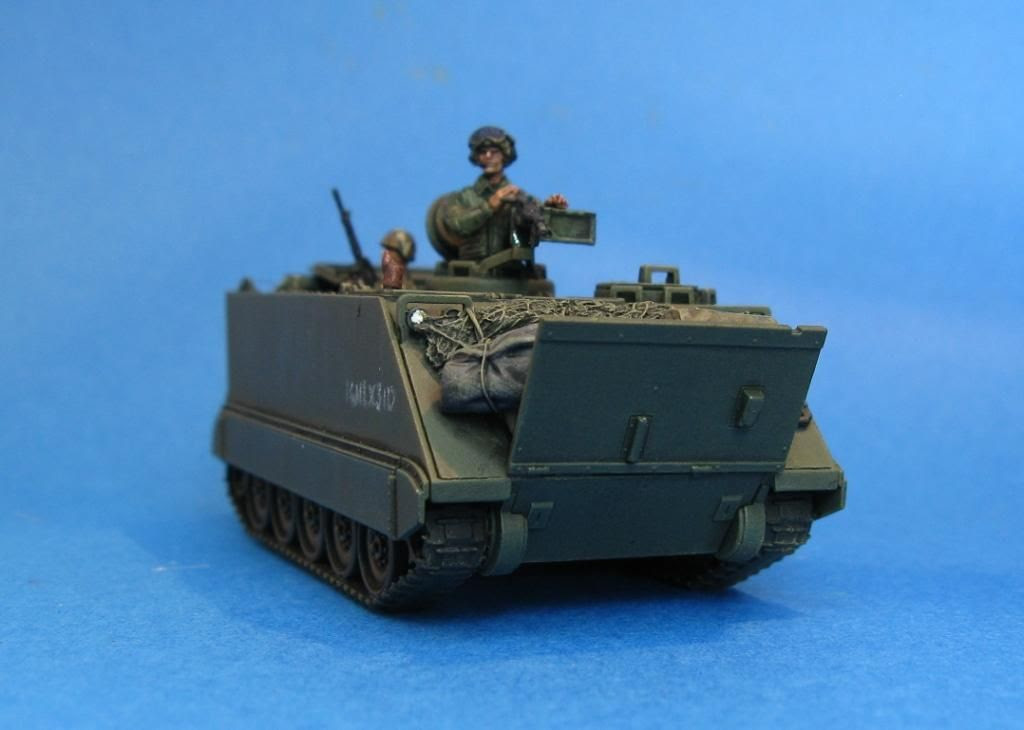 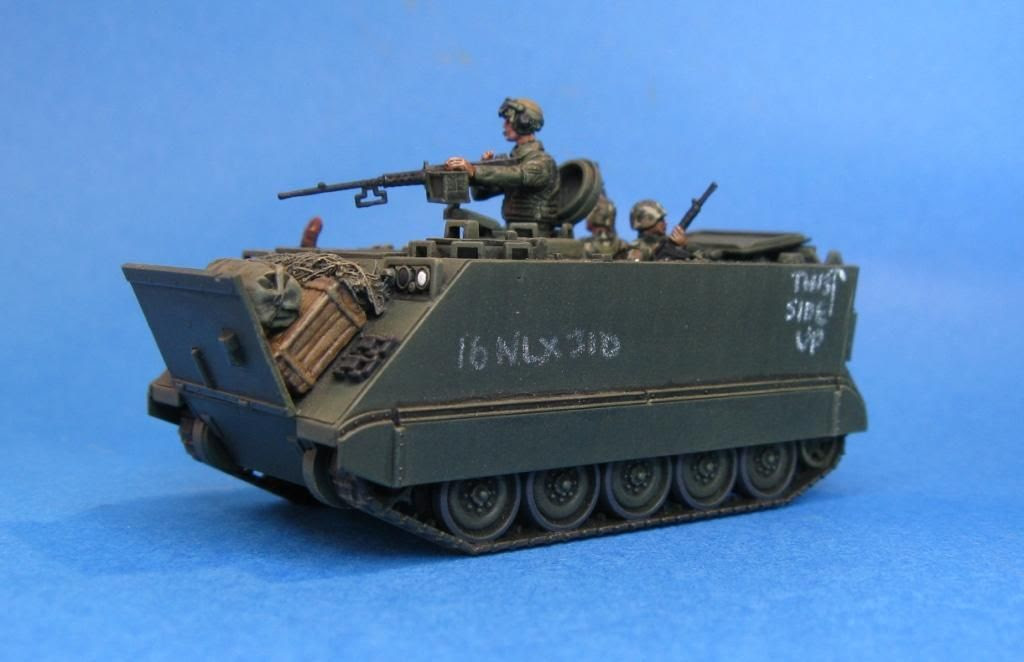 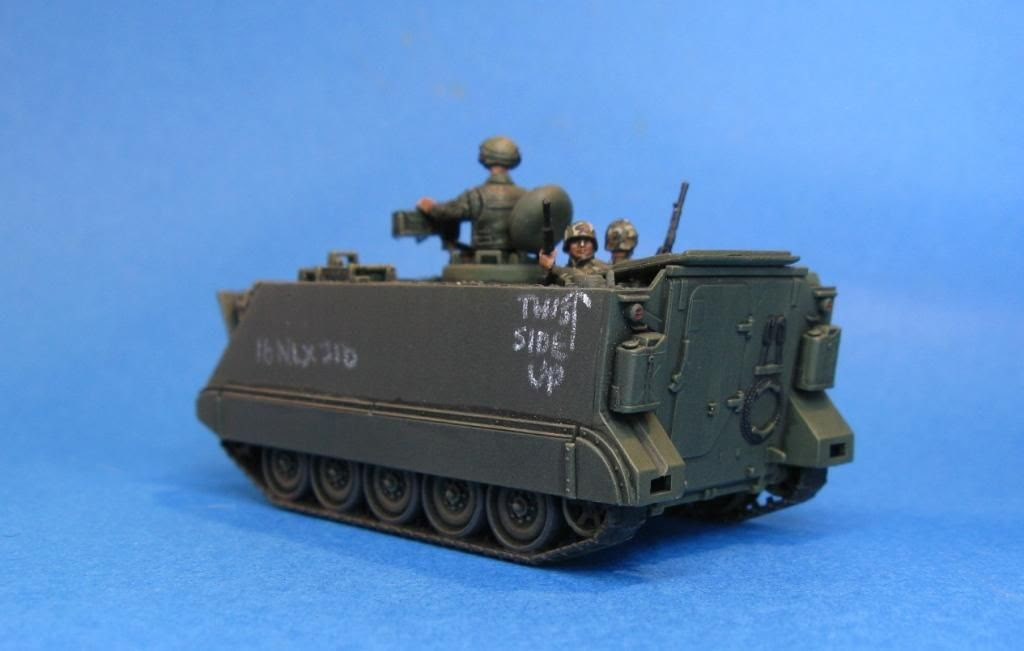 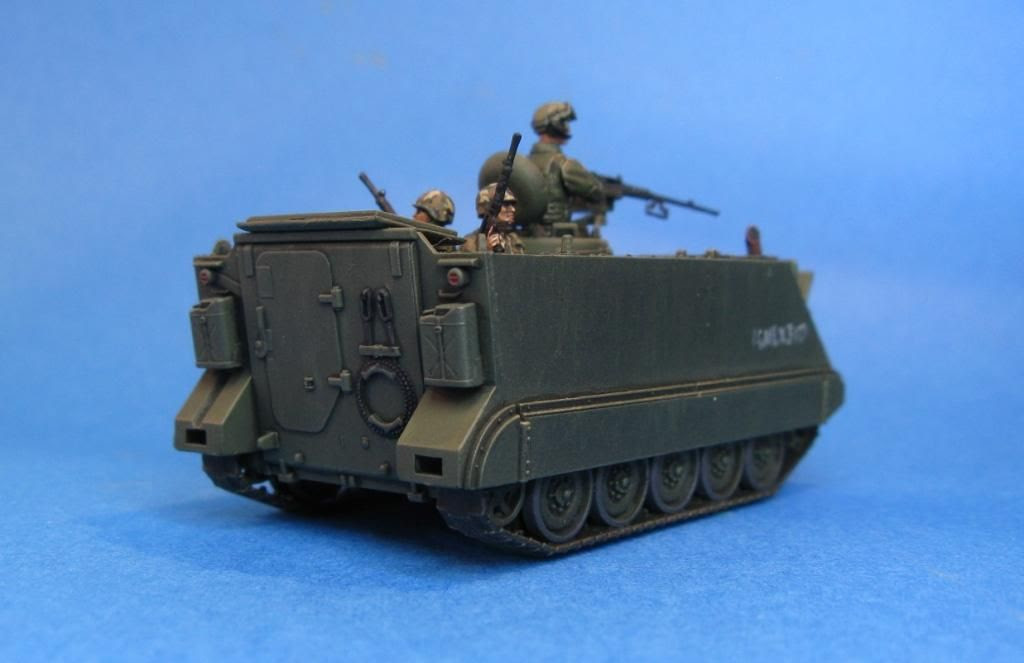 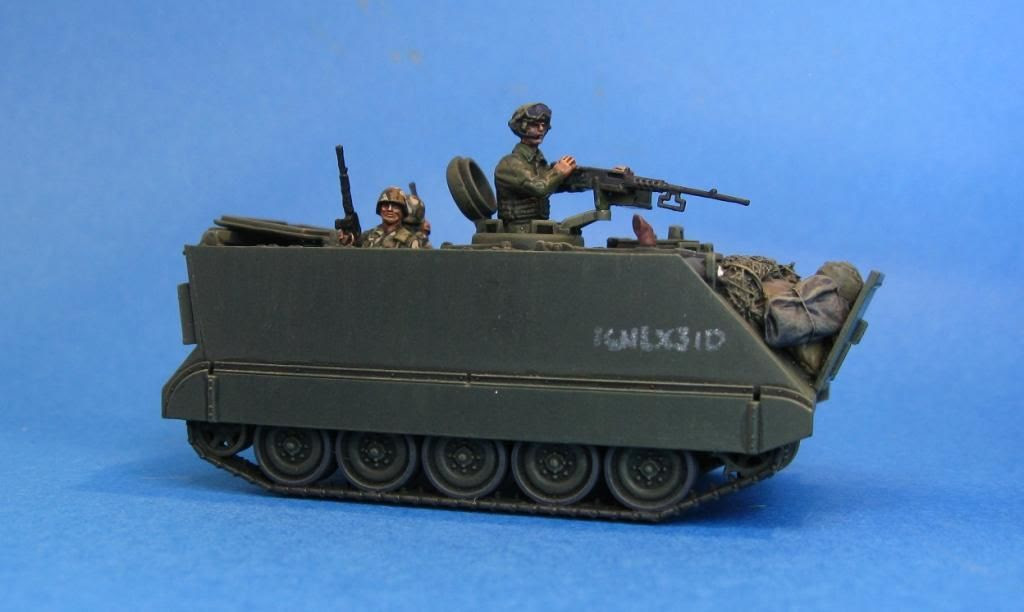 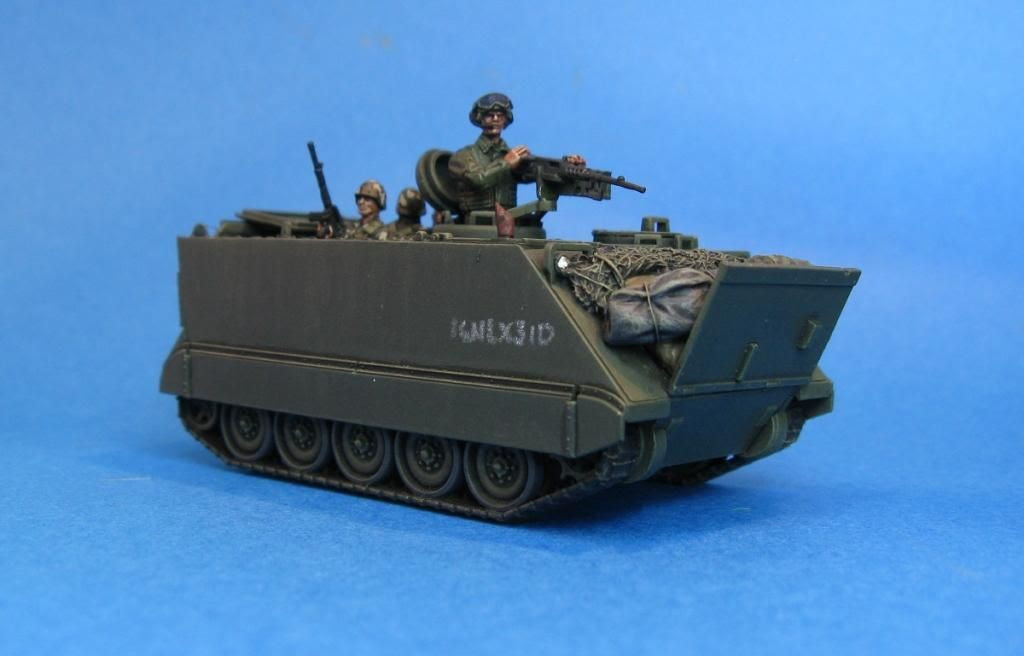 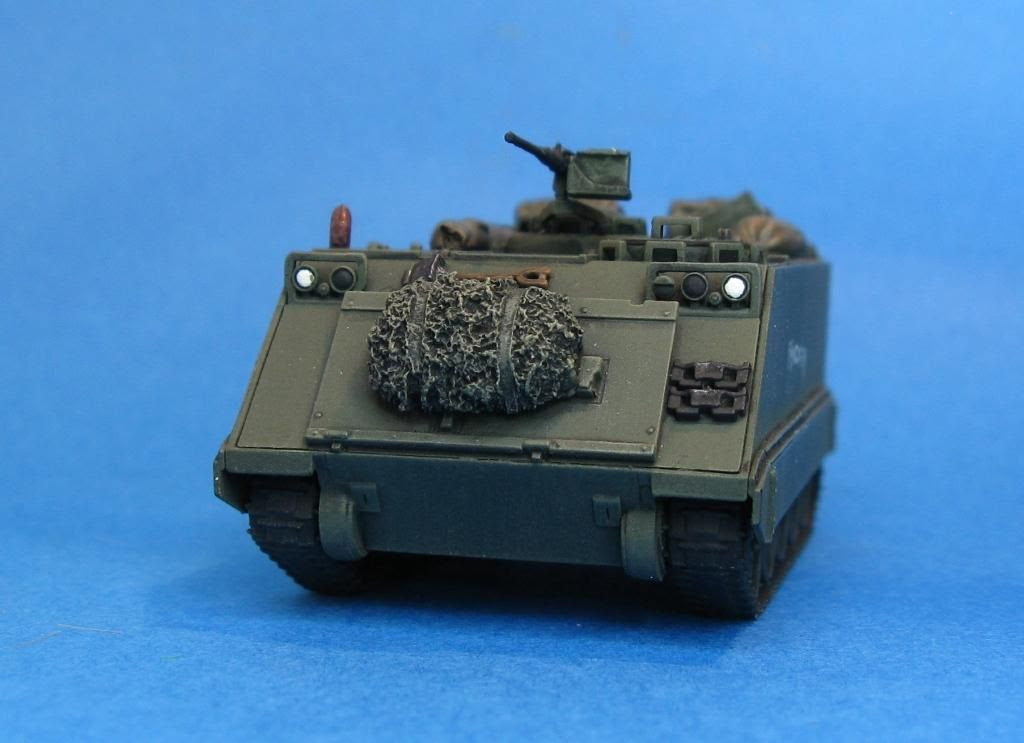 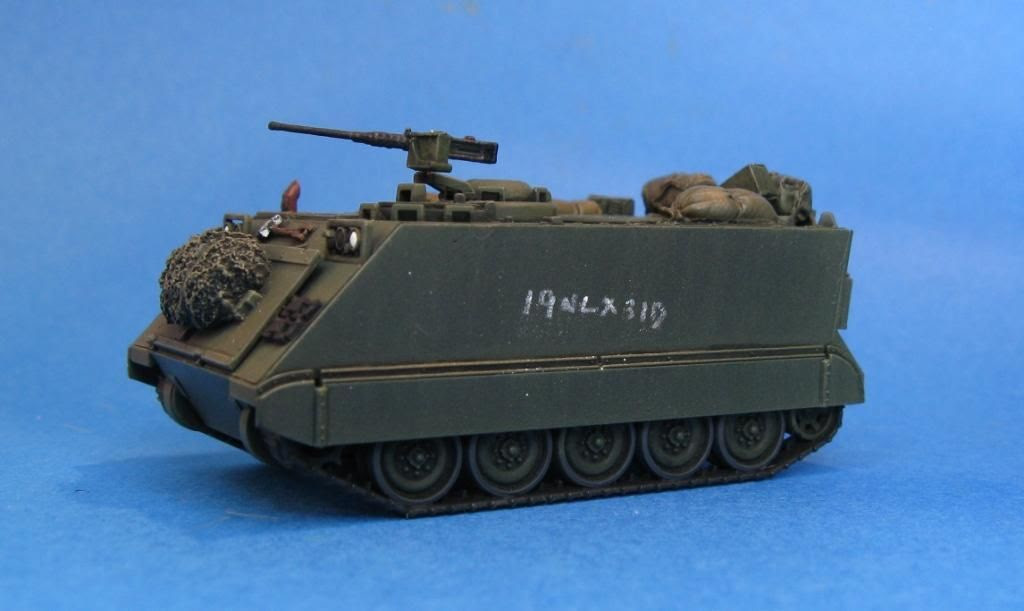 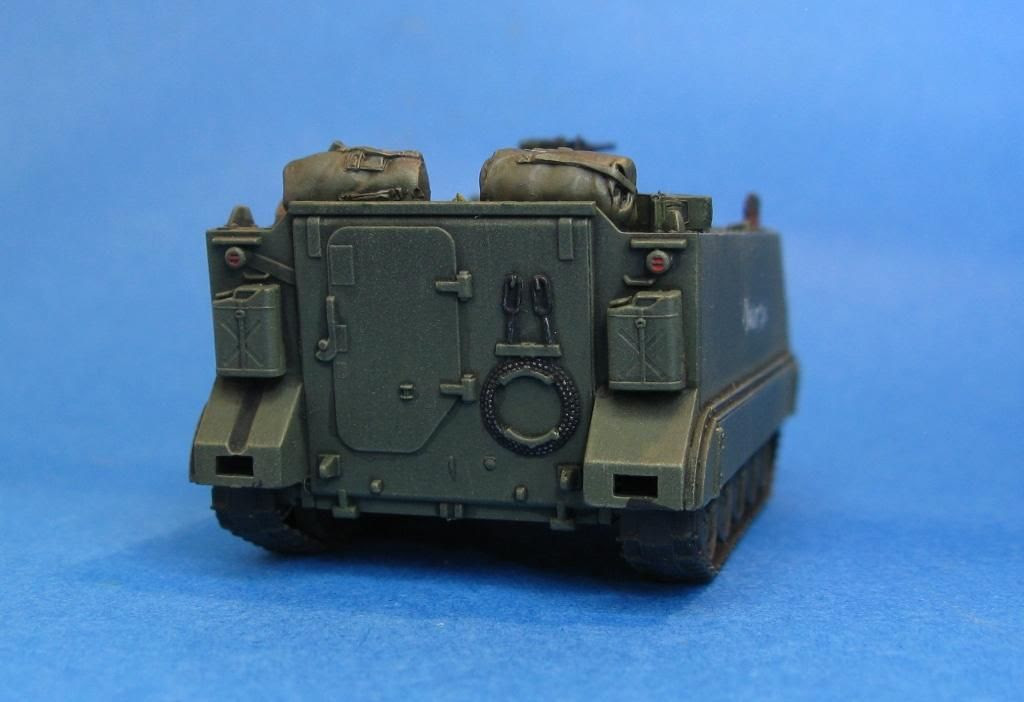 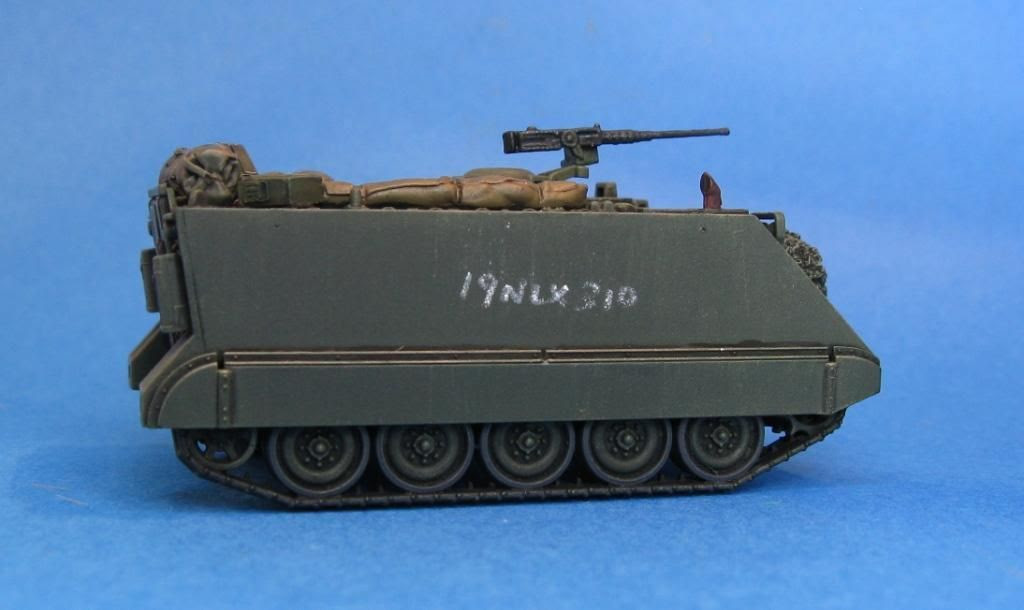 I've tried a couple of new techniques here - with the flesh of the figures and in trying to do some chalk writing on each of the vehicles.  I like how the flesh came out - more work but 100% better than what I normally do.  I'm a little underwhelmed by how the chalk turned out - a lot of hassle, but I don't really like it - so it may disappear when the weather gets better and I can do the final weathering.

All in all I'm still pretty happy with these.