A few years back, I stumbled across some very cheap Airfix Centurions in a bargain bin at an excellent Hobby store in Newcastle (Australia - not the UK).  At the time I already had 3 Centurions, and a pretty detailed list in my head of what I wanted to purchase at the store.  Centurions did make an appearance on the list.  I stood there for 5 minutes trying to decide on picking them up or not.  Eventually I reasoned to myself - I'll never need more than 3 Centurions - and went and bought the stuff I had planned.  I've regretted that decision ever since!

So when I started 3D printing, Centurions were high on the list of things that needed to get printed.  Here's a little sample:

Very meaty models.  The STL's can be found here.  I printed 4 standard Centurions, 3 with side skirts, 1 without.  As you can see below:

I then printed a Centurion with a dozer blade.  This was going to be my 2-I-C's vehicle.  Unfortunately here I had some issues.

It took me a while to figure out what was going on (it turned out to be some resin had spilt onto my LCD screen) and eventually I was able to print the final Danish Centurion.
Next step was to add the Light Intensification sighting system the printed Centurions, adjust the mantlet to fit them, by scraping it down quite a lot, and then cover the mantlet in greenstuff to look like a canvas cover.
Here is the planned Squadron.  It is a short Squadron, in that I plan to replace the missing troop with a Mechanised Infantry Platoon.  Hopefully you can see the IL systems next to the barrels and the greenstuff covered mantlets.

Next step was to deal with the cam netting and stowage

Then everything got a coat of black undercoat

Then the blu-tack came out:

And the next coat of spray.  This time I used a Tamiya aircraft spray AS-23 Bright Green (Luftwaffe).

Peeling off the blu-tack we are left with this:

As you can see, AS-23 is quite different green to my final colour - but I don't mind it as a base colour.
Part 2 will cover the painting...  Coming soon.
Thanks and stay safe
Richard
Posted by RichardC at 3:22 PM 3 comments:

It's been quite hard to get anything finished recently.  I have no workshop and do my 3D printing in the same room I do my painting.  Anytime 3D printing is going on, or has even just recently been going on, you do not want to be in there because of the fumes - which give me a stinking headache.  It's also my work office several days a week.

So I've put printing on hold for a while to try and finish a couple of things - and the first thing finished was an addition to my Danes in the form of a Hjemmevaernet (HJV) or Home Guard Special Intelligence Patrol.  Although HJV, these patrols worked directly with the Danish Army as their only Long Range Reconnaissance Patrols or LRRPs.  These guys specialised in gaining tactical intel from behind the lines, both from fixed observation posts and through patrolling.  Here are a couple of pics I've found - possibly from the 1970s onwards - which should help you see why I've done some of the things I've done to the figures:

I've tried to paint these guys in what I'm calling my interpretation of the Danish M/84 Flecktarn camouflage uniform.  Head and weapon swaps all come from Elhiem.  His Hovea m/49 SMG is about 1000% better than the one I made out of plastic rod!  I'm reasonable happy with the result of these and the minor conversions I did.  Here is the whole unit:

For a closer look - here's some front and back pics of four of the chaps:

And a front shot of the other 4:

If you take 2 of these chaps you have a very useful sniper/spotter team:

Interestingly I've read that at the time only the HJV used snipers - the regular Danish Army did not.
Lastly - here are a couple of shots trying to show the weapon swaps on the NCO and the spotter.  Not the best pics but I hope you get the idea.

So that's it - my HJV Special Intelligence Patrol.  I hope you like them.  PLently more Danish stuff to come this new year - along with loads more Canadian and Norwegian stuff.
Hope you all have a much better 2021 than 2020.
Richard

Recently my brand spanking new Elegoo Saturn 3D Printer arrived.  I've been waiting for it for a few months now, as I was lucky enough to get in on the pre-order sale.  So of course I've started to pump out some 1/72 scale models to try and finish off all the Armoured Fighting Vehicles I needed for my Canadian force.  It's very much been a learning experience, but I'm pretty happy with what I've managed to achieve so far.

Here's most of what I have printed for my Canadians thus far:

So in the rear row (from left to right) we have 2 M150 TOW Carriers followed by 2 M113 ADATS.
In the front row (from left to right) we have a M113 C&R Lynx, 2 M113's to carry a mortar team each, a M113 to carry a Blowpipe team and another Lynx.
You can see I've replaced the barrels on the Lynxes .50 cal HMGs with a couple I found in my bits box.  The 3D printed ones were just a tad too chunky to my eye.
Of course once painted up I could use the 3 M113's for another Mech Infantry platoon - I'd just need to add 1 more M113.
I also printed these four AVGP Grizzly APC's:

and 2 Cougar FSV's seen clinging here to the print bed

But I have to admit I'm not 100% happy with them and am considering printing them again.  I'm being a bit pedantic, but I feel like the scale conversion is just off a wee bit and they are just a fraction too big.  There's every chance I'll just get over it, but we'll see.  I've also learnt a bit about supports since I printed them, and think I could do that a bit better as well.  I'd also never buy black resin again!
The only problem with 3D printing is that you have to stop printing after a while and start stowing, camming up and painting.  We'll see if I can do something about that this weekend.
That's it for now.  Have fun
Richard
Posted by RichardC at 11:28 PM 12 comments:

I said I was going to do this a few weeks back and have finally gotten around to it.  Although I am working on a new Cold War game with a completely different way of building forces, I have made some minor changes and edits to both the Canadian 4CMBG and CAST Brigade lists for my totally unofficial variant of the WW2 Battlegroup game.  For completeness here, I've also included the AFV data table.

Here it all is

I will also update the links of the NATO lists Tab at the top of the page.

Someone posted this Youtube clip on the Canadian Division Reconnaissance Regiment up on Facebook today - I watched and enjoyed it and thought I'd put it here as well.

It's been a while since I've done this so I hope it works!

Today I was able to take some photos of the finished Canadian M113 Platoon - this time just the AFVs.  I'll jump straight into the photos.

Here's M113 No. 1.  Not exactly sure how the vehicle commander ended up looking quite so relaxed in the cupola - I hope I can fix that at some point in the future.  So No. 1 is an S-Model M113, with a variety of stowage including an old Airfix bicycle and an Elhiem .30 Cal.  The commander is from AB figures.

M113 No. 3 is a little bit different.  It is an old ESCI kit I made years ago and was going to be an American M113, but I needed just one more AFV to make up the platoon so the Canadians won out.  It to has a variety of stowage from different sources, AB Figures commander and driver and 2 Elhiem troopers riding in the back with the rear hatch opened. 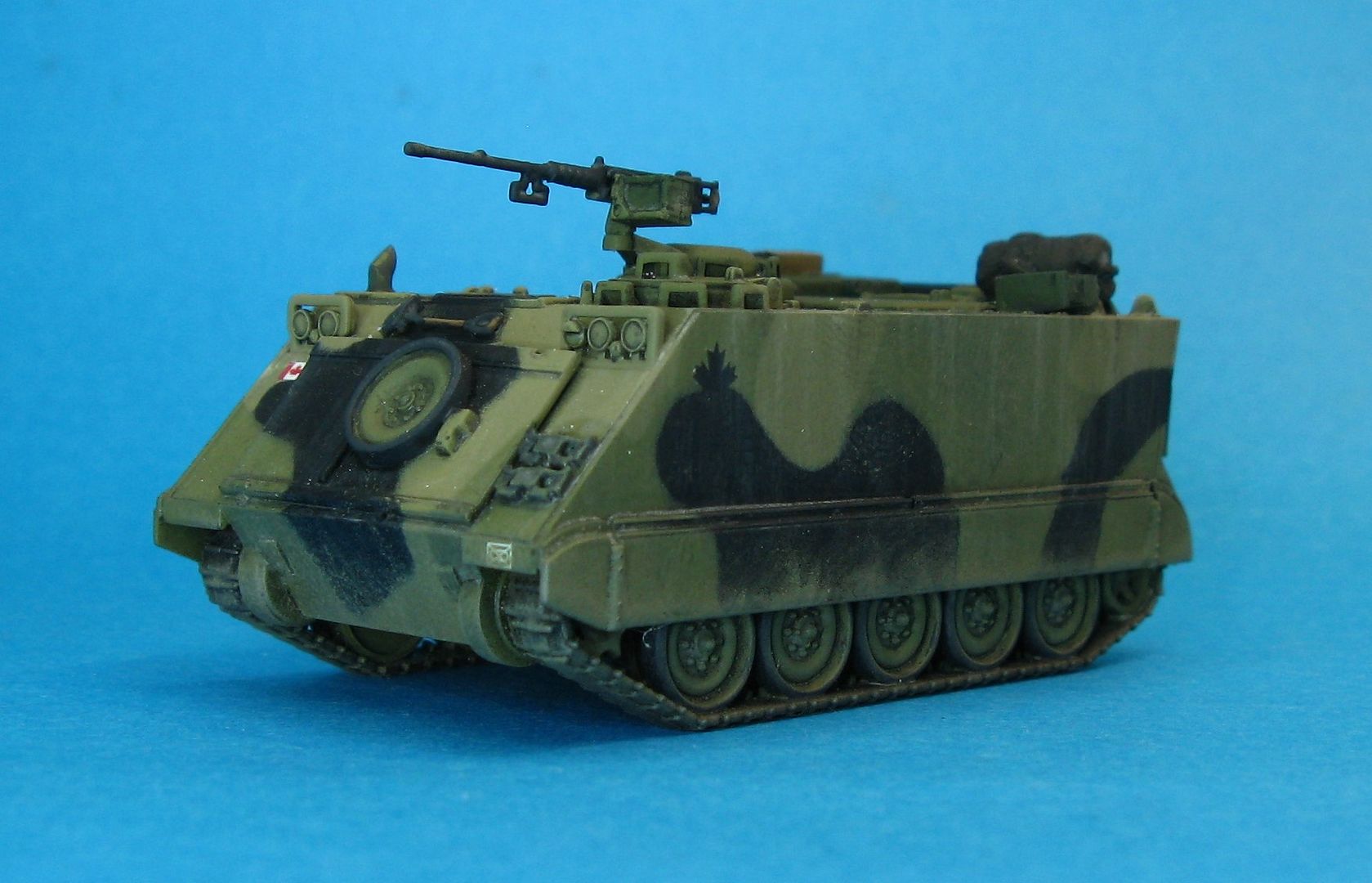 Finally the obligatory group shots of the whole platoon.  I haven't totally decided which is the platoon commander's vehicle, but at the moment I'm gunning for M113 No. 2.  Each is unique enough that I will be able to note which squad is in which vehicle at the start of any game - which is always handy.
I tried a couple of different things on these vehicles.  I used Vallejo gloss and matt spray-can varnish on them.  Not 100% sold to be honest - but I'm willing to give them another go.
I also used 2 MiG Productions Oilbrushers on the vehicles.  I only have two colours - Dusty Earth (a light tan colour) and Starship Filth (a grey colour) and I tried to give the vehicles a dusty, grimy streaky look.  I'd be interested in any feedback - as I think I may have overdone it a little.  Who knows...
Anyway - I'm very happy to have these finished and to be able to move onto something else.  This will be it for the Canadians for a little while, as I wait for my 3D Printer to arrive.  Then I will jump back into this particular project with bells on!
Thanks for looking
Richard
Posted by RichardC at 12:51 AM No comments:

Before I jump back to the Canadian M113s (which are nearly done) I have managed to finish the mechanised infantry platoon that will use them as rides.  All the figures are from the Elhiem Figures website and are selected from the NATO - FN FAL, MAG section of the webstore.

It's really great to have a figure range that covers the Canadians so well.  Everything you need to complete a platoon is there and hopefully there maybe even more figures in the future that will cover a couple of things I think are missing.  Hopefully!

Anyway - on with the show.

First up, here's a front and back set of pics of my 5 man Platoon Command Section.

This is followed by a Light Mortar Team of 2 guys and a 60mm mortar I dodgily put together rather than stump up for an actual model...

The figures in these 2 shots make up the First Section.  The top pic has from left to right the NCO armed with a Sterling SMG, a soldier with a Carl Gustav, another with a FN C2 LAR (a heavy barreled SLR used as a LMG) and a soldier with a C1 Assault Rifle (more commonly know as a FN FAL or SLR).  The second photo is of 4 riflemen with C1 assault rifles.  All the sections that follow are laid out the same way.

This is the Second Section.

And here is the Third Section.

I also have a couple of these guys from Elhiem's LAW Gunner set.  I haven't assigned them to a particular section - and would use them to signify use of a LAW in a game, before replacing them with a standard SLR armed figure.

Here's my Blowpipe Team.  I have another Blowpipe chap and may end up painting up a second team.

And finally here is the Forward Observer Team.  Nice and straight forward, although I am thinking of putting a radio on the back of the chap holding the phone receiver.

And this is everyone together.
This is the majority of the infantry side of this project complete.  I will add 1 or 2 80mm mortar teams, and I will attempt to undertake a conversion of a figure to get rid of his SLR and exchange it for a Browning MMG.  I'd love Elhiem to do proper Canadian MMG and .50cal HMG teams - that would really top off my infantry project.  I may also do a Recon Patrol - basically another section.  Not sure...
So that's it for now.  Back to the M113s shortly
Thanks
Richard