Back to the Northern Front theme...

After several years of poo-pooing T-55s and PT-76's as "too old" and "something I didn't need to get", I'm now the proud owner or several and am about to get one more very special T-55AM.  But before that happens, I've been working on several Britannia T-55s with the ultimate aim of having them look like this: 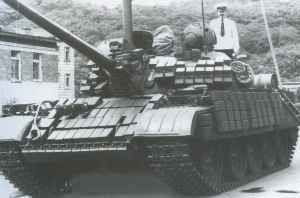 Now I'm not aware of any current (may be some planned) T-55AMV kits - so I decided the 3 Britannia T-55s would form a decent foundation for the AMV variant.  To say I was very disappointed with the T-55s as they stood (when compared to say a Trumpter T-55) is a massive understatement.  The Trumpeter kit goes together like a dream. and while the Britannia resin model is only several peices, I've spent hours going over them, green stuffing air bubbles and trying to fix massive blemishes.  The resin has to be the cheapest I've seen in a model kit, and crumbles as you cut it.  The end result - before adding anything to them, was a long way from perfect - more like I just gave up...

So, through several hands (thanks to John and Michael) I managed to get my paws on some resin cast ERA blocks.  I added some card side skirts and glued on the bricks as best I could.

And ended up with a slightly dodgy "representative" platoon of T-55AMVs that will suffice very nicely until something (alot) better comes along.

Here they are just before I sprayed them:

I also added a laser range-finder above the main gun and a light near the Commander's hatch.

Under the 3 foot rule, I hope they will look fine...

That's all for now - next up some much better PT-76s... Off to do some spraying!