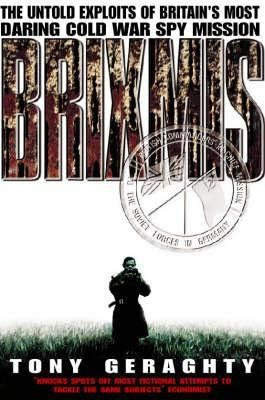 I had hoped to have some photos up today of some new finished Soviet VDV - but "Oh Shiney" syndrome took over and instead of finishing them off I spent may modelling time on the weekend cleaning and basing a load of the new Elhiem West Germans and working on a couple of S&S Models Jagdpanzer Kanones.  More of both of those later (or sooner I hope).

Anyway - in the mean time I just wanted to let you know about this book "BRIXMIS: The untold exploits of Britain's most daring Cold War Spy Mission" by Tony Geraghty that I am currently reading.

This is an excellent book which follows BRIXMIS - British Commanders'-in-Chief Mission tot he Soviet Forces in Germany - from its inception soon after the end of the Second World War, all the way through the Cold War.  Each of the four powers - the Soviets, US, Britian and France had one of these missions that operated as a "liaison" unit in East and West Germany working with (and watching) the other side.

The book provides you with a reasonable good potted history of the Cold War - basically as events happened around the world, they all had an impact on the running of BRIXMIS operations - so it is useful from that perspective.

It's main thrust though is relaying accounts of the "tours" undertaken by BRIXMIS teams, the disasters, the funny events, the fantastic intelligence gains, the audacity and chutzpah of some of the team members etc.  The Soviets and East German Stasi go out of their way to stop the Allied Missions from operating - attempting to tail their every move, arrest them for the slightest perceived infraction and in some cases - ram them off the road or even shoot at them.

And yet much of what we knew of the WARPAC forces, TO&Es and specifically equipment - came from the Allied Missions.  The gall of these guys is completely amazing.  Two officers illegally break into a Soviet underground bunker - several stories of underground bunker.  Upon leaving they see that their car, parked metres from the opening of the bunker, now has two Soviet guards there questioning the driver.  They walk up to the guards - say "Well everything appears to be in order here.  Catty on."  Salute, hop into the car and drive off.

A Soviet train carrying brand new BMP-2s stops.  BRIXMIS need to find out the calibre of the new gun carried by the BMP-2.  Not having a tape measure handy, a sergeant jumps up onto the BMP, presses the apple he was going to have for lunch into the gun barrel and leaves.  NATO now knows its a 30mm barrel.

At another train line a bunch of new T-80s arrive.  A BRIXMIS officer jumps on board, find the turret hatch is not locked, gets in and photgraphs the inside of the T-80.  He also find an officers briefcase full on info on the last exercise - which he nicks.  On another occassion a NCO nicks a ERA brick from a T-80.

To find out how Soviet aircraft and helicopters operate, BRIXMIS teams go onto the firing range, under the bombing - knowing that the Stasi won't follow them there.  They also nick unexploded bombs and take photos of the underside of aircraft - things satellites can't see.

The stories go on and on and are well worth the read.

It was very interesting to read how well NATO knew every airfield and bases in East Germany.  BRIXMIS even took samples of airfield surfaces and under layers.  They could provide NATO air planners with photos of each base from numerous angles.  A great deal of the info that lead to increased numbers of ATGMs and the newer ones to defeat ERA came from the Allied missions.

And of course they played a significant role being on the ground provide verification of the peaceful or otherwise intent of WARPAC forces.

So basically - I very much recommend this book to you and think it provides valuable insight to anyone interested in the Cold War.

Richard
Posted by RichardC at 3:01 PM