I'm sorry that my first post for October is a little late - won't happen again! Well I hope not anyway. Last week was incredibly busy with the final preparation and then the running of the Flames of War Tournament over the October long weekend, here in Sydney. I think we pulled it off pretty well, but I had no time for life's little luxuries, like updating this blog. But now I do...

At various times in the past I've indicated that one of the projects I've been building for is a special mission involving a Spetsnaz attack on a Harrier hide. To finalise all the things I needed for the mission I had to finish a second Harrier GR.3 and a couple of British vehicles. Well I have all the vehicles now - just the matter of painting them up - and I've finished my second Harrier.

I am to get this mission and all the bits and peices that go into it, ready to be played in the next month or two - well before Christmas anyway.

I wanted the second Harrier to look different to the first one (that appeared in my very first post - I think)so I looked into some of the different weapon options available to the GR.3. I quickly decided that I wanted to go with a couple of Laser Guided Bombs. In reality this would mean that one of the Aden gun pods would be removed and replaced with a very similar looking laser designation pod - so I as able to simply leave the gun pods on the model as is.

As luck would have it I had to entertain the son of one of my wife's friends for a couple of days so we went down to my local hobby store and bought a couple of Airfix kits to make up together. He choose a Bucanneer - which came with two LGB. Once I managed to convince him that he really didn't need them, I was able to put them aside to add to the Harrier.

So without further ado - here it is

Second Harrier GR.3 in side profile

Now a couple of shots of the two Harriers together (just to prove I didn't cheat and redo the first one!) 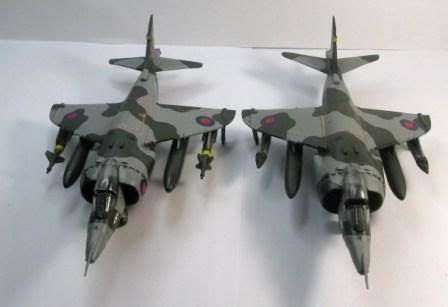 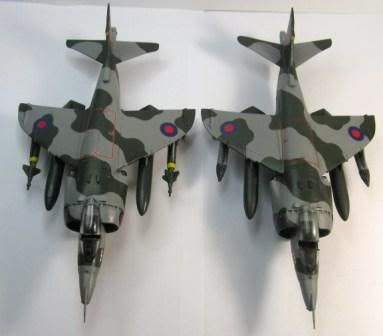 No video links today - I think I nabbed all the best ones on my previous Harrier post - so if you want to check those out - go to the very first post.

Richard
Posted by RichardC at 1:30 PM