Alrighty - this is a test more than anything else.

I spent much of today trying to add a router to my home PC so I could access the internet from my Laptop around the house. After a fairly frustrating few hours I am noe typing this in on my Laptop sitting on the lounge - so something must have worked. I know this is no big deal fro most of you - but for me this is a big deal!

As I may have stated earlier, I've written three scenarios for Ambush Alley Games for a new product that will hopefully be coming out soon. One of the scenarios deals with the adventures of an SAS Stay=Behind-Team.

I needed to paint two more SAS troopers to have all the SAS figures I needed for the scenario. One of these was a sniper, the other his spotter, armed with an M16/M203. Unfortunately I didn't own a sniper. However, Leigh Neville = gentleman and scholar that he is - had a spare and gave one to me.

Not much to report here as most of it has already been talked about previously. I did change the colours slightly on the chap with the M16/M203 - so for his DPM I used the same base colour as the others, but used Vallejo Beige and Beige Brown as the swirly colours. I think I like this one better, but it still isn't quite there.

The Ghillie Suit was actually really fun to paint - very simple - Vallejo Reflective Green, Citadel Babab Black wash - a drybrush of the original colour, and then I picked out a few of the indivdual strands with a couple of differnt greens and khaki.

Lets have a look at the photos: 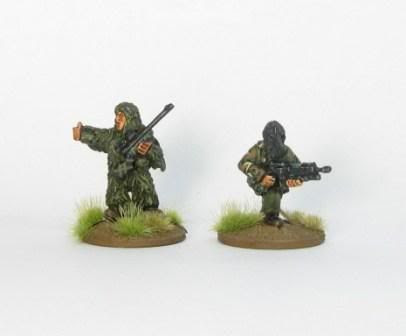 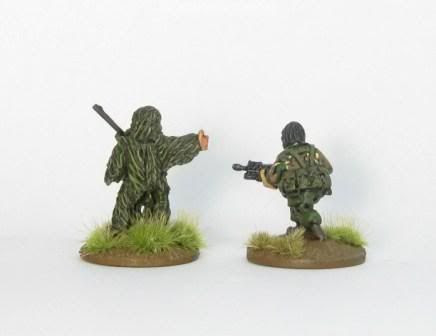 Now just the sniper by himself: 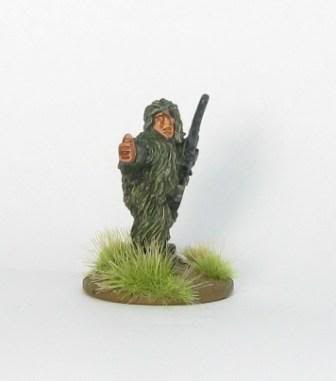 That's all for now - I might come back and add in some more Ghillie suit photos on Monday.

Richard
Posted by RichardC at 11:18 PM