Well last week an order arrived from Amazon, and included in it was reading “The Red Effect” by Harvey Black – which I had discovered from the Cold War Message Board of TMP.


Now a week later and I’ve just finished reading it and thought I’d share my thoughts with you. 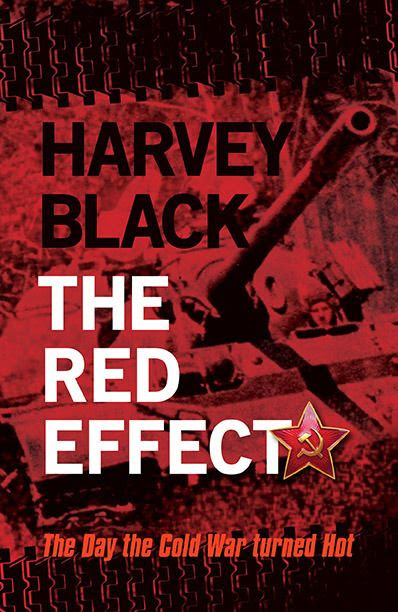 First up – buy the book. Simple as that. If you are like me and have always enjoyed Cold War fiction – then this book will float your boat.

Secondly – “The Red Effect” is meant to be book 1 of a trilogy – which I think is good news.

Now onto more detail. I’ll start with my likes.

Harvey Black knows his stuff. He is ex British Army Intelligence and obviously served in BRIXMIS. His descriptions of things have a feel of authenticity which is excellent – almost too much at some points. You could probably drive around Berlin flowing the directions in this book, and know which camera and lens is best for taking photos of Soviet troop trains.

It has a nice reality feel to it. Later in the book when he is describing a British unit setting up I was able to look on Google Maps and pretty much see everything he was describing. I like this. Other books in this setting use fictional towns and locations (Red Storm Rising) or twist real locations so I found it difficult to follow on Google Maps (First Clash).

Another part of the reality that I was impressed with was the combat scenes. Although these only really come towards the very end of the book, again they felt authentic. Whilst I love Team Yankee, and read it probably once a year or so, I always felt that it didn’t really portray the potential awesome power of the Soviet Army in this period. Some of the actions, like the first couple of contacts, start with minimal artillery barrages, involve fairly small soviet units using poor tactics, against properly prepared, well placed US units. Bad things tend to happen to units “over there” rather than to Team Yankee. In The Red Effect, you get a feel for what it would be like under a Soviet preparatory barrage – from an infantry man’s point of view. You see the difficulties of a single British Division trying to defend 90 kilometres of front, the difficulty of infantry, not defeating but simply delaying an armoured juggernaut bearing down on them etc.

Black goes into detail on the make-up of individual units and their dispositions. This is gold for wargamers and I’ll be re-reading with a view to using the book to create scenarios.

NATO is kind of caught with its pants down – not wanting to upset the Soviets. A fairly realistic option in my view. No NATO first strike or anything like that.

I thought his approach to how the war started was “interesting”. Some books like Team Yankee and First Clash focus on the small picture and leave the strategic setting to other books like The Third World War, or ignore it altogether. Red Storm Rising uses the first quarter at least of the book to set out the rationale of the conflict, at least from the Soviet side. Black does something similar, setting up the characters and describing some historical events that up the ante. The reason for going to war though, is set out in a fairly short conversation between the Chairman/General Secretary of the USSR and the Head of the KGB. Part of the reason I read these kind of books is to see what things had to happen, in that author’s mind, to lead to World War 3. It appears not much in Black’s view – all it takes is his Leonid Brezhnev equivalent not to die – and like I said, I find that interesting.

Things I liked less – and bear in mind I like the book – so these are probably merely quibbles.

Black deals with historical events, such as the shooting down of KAL 007, but renames the flight. He renames the American President – who was an actor, the British Prime Minister is a stern woman and the Soviet leaders have names very similar to their real names. I don’t see the point. It’s fiction. Maybe it’s a legal thing (I have no idea) but I would have preferred real names and events.

There’s no real mention of REFORGER or other NATO exercises in 1984. No mention of NATO counter-battery fire or air strikes. These are really petty quibbles – as you can see I’m scraping here to find something negative.

I guess the bottom line is that I am very much looking forward to the next book. I’ve been doing a lot of WW2 gaming, painting, model making etc lately and it was really great to stumble across a Cold War Gone Hot novel and get back in the CWGH.

Having read all my other CWGH books to death it’s also interesting to be back in the position of not knowing how this will all end and wondering what direction Mr Black will take.  So well done Harvey Black - and bring on book 2!