This week we are back into the Cold War with a couple of MMS BRDM-2 variants.

Firstly some good news on MMS. From what I understand a long time ago (in a galaxy far away) MMS used to make a pretty impresive array of Cold War vehicles. Some time ago they stopped. It seems they must have decided to concentrate on WW2 vehicles.

Luckily for me I have a friend who has a little stock of Cold War MMS vehicles that I am slowly buying off him. Some appear every now and again on ebay as well.

Now the good news: The Hobbyden has recently announced that they are taking over the MMS modern Range. It looks like , their main emphasis will be the Cold War and in particular their first releases will be focussed on the Soviets. Unlike the original MMS (at least what I have seen of it) all the stuff done by The Hobbyden will be produced in resin and metal - which means it will weigh a lot less for postage.

So that is really good news - The Hobbyden also has a range of stuff made by them that suits the Cold War - go check them out.

Okay - so onto my MMS BRDM-2 variants. Here's a wikipedia link with more information on the BRDM-2:

I can't really say too much here as i got both of these vehicles completely made up. Recently however, I did get a MMS BTRD in its original box - still in peices so I'll give a proper review of that one later. These are very heavy models and basically all I can say is that they look pretty damn good to me!

I simply painted these as I pretty much paint every Soviet bit of kit I have - so nothing new there.

So - on with the show. First up is a BRDM-2UM Command Vehicle

Its a pretty boring model - hence just the one photo - but it does the job I think. 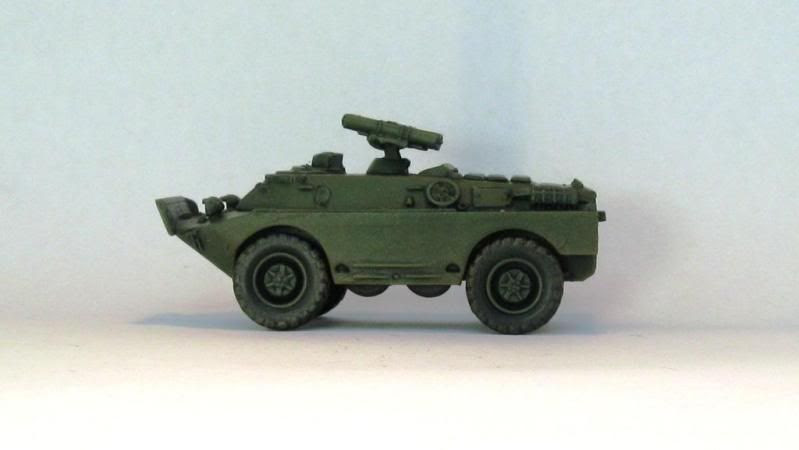 Bottom line - keep an eye out for MMS releases from the Hobbyden and watch out on ebay - well worth it.

Richard
Posted by RichardC at 3:41 PM