I was hoping to have something completed for this update, as I was working on 3 very old Matchbox RAF Chinooks, and whilst they have reached a certain point, it was nothing worth photographing.

And then, as a long weekend is about to hit, I organised a little game and decided to use that as motivation to knock out some British Army on the Rhine AFVs - most of which I've had for a while, but for some reason they keep going to the back of the pile.

So just the one work-in-progress photo today: 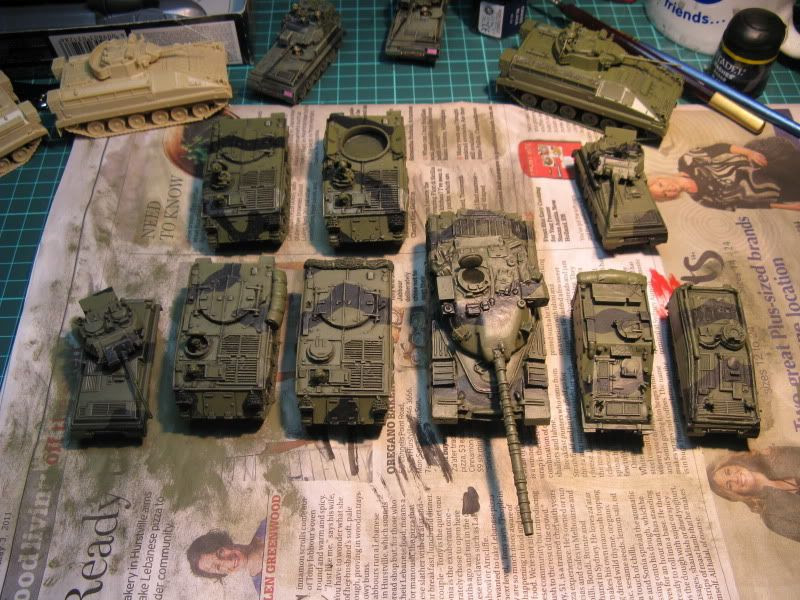 As you can see there a 4 x Britannia FV432s (carrying 1 Mechanised Infantry Platoon in the game) a Britannia Chieftain (which will be added to a couple of very well painted Airfix ones I bought off Leigh - who bought them off someone else...to make a Tank Platoon) a couple of Airfix Scimitars - and in the back ground you should be able to make out two others - again beautifully painted - not by me - and bought from Leigh. These will make either 1 four AFV close recce platoon, or I'll split them into two elements of 2 vehicles each - not sure yet.

There is also a Cromwell? Spartan and a Cromwell Sultan. The Sultan - for whatever reason I'm not exactly sure - is one of my all time favourites. I just like its lines for some reason... The Sultan will be my HQ Command Vehicle, and the Saxon will be carrying an Air Defence Team.

In the background you can probably see a few Warriors - more on that at some point in the future.

I'm not 100% happy with how these look right now. I'm hoping I'll grow to like them more, the closer they get to completely finished - but there may be a bit of repainting in my future. With a bit more work though, they will suffice for the game on Monday.

Hopefully I'll be able to take a couple more WIP photos, then some completed photos and give you an AAR next week.

Thanks and have fun...

Richard
Posted by RichardC at 2:29 PM