The Road to Hünfeld - Game 1

Game 1 was meant to be a small reconnaissance mission.  This was to represent part of a Soviet Regimental Reconnaissance Company, well ahead of the regiment, clashing with elements of a West German Reconnaissance Company.  The aim of the game was for the Soviets to get as much of their force off the table as they could and for the West Germans to stop them, whilst not suffering too heavily.  Any forces on either side left alive at the end of the game would be available as an addition to their Game 2 force.

The table looked like this from the West German end: It's meant to be Southern Germany (north of Fulda - near Hünfeld) close to the border.  It's heavily forested, but there are trails through the forest.  The roads allow, well... road movement, the trails allow off road movement, and attempted to travel through the woods forces a D6 penalty on each move.  No one attempted to travel down the rail line.

From the Soviet end: 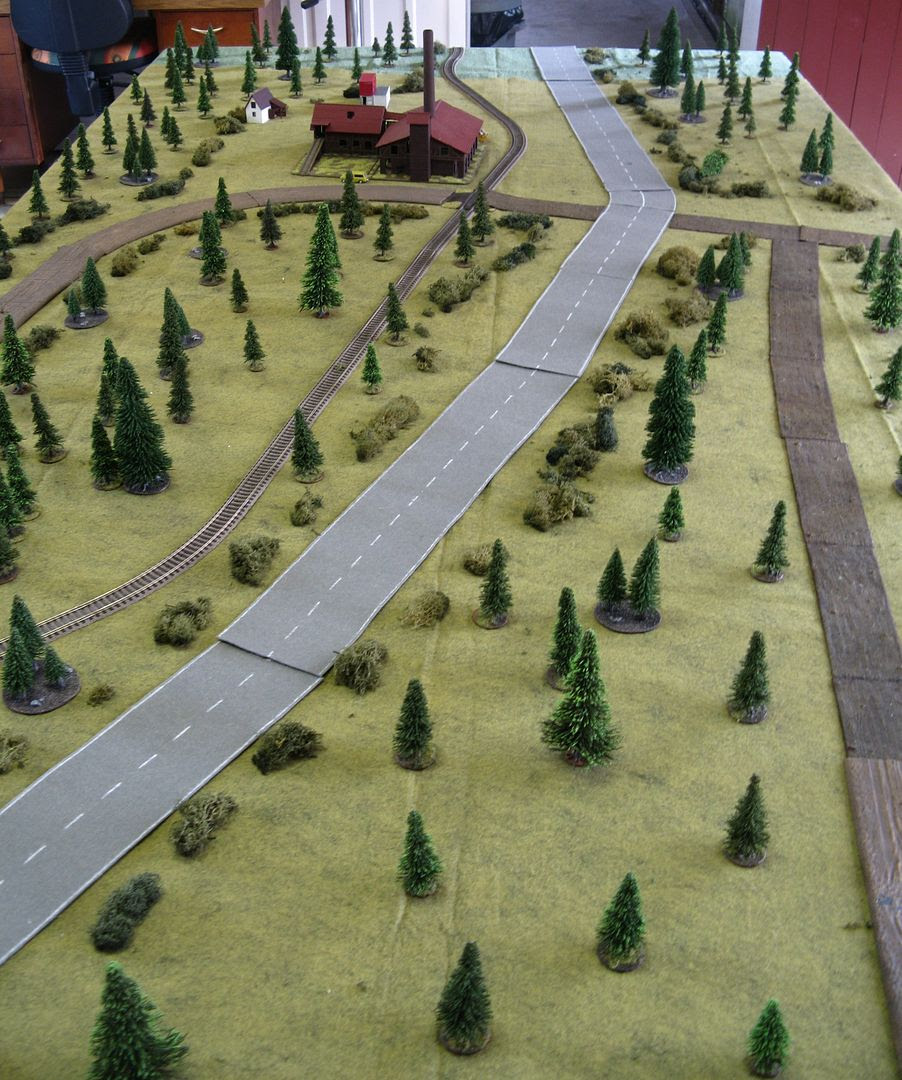 The lichen represents the edge of the woods.

I decided to make some cammed up hidden markers/blings just to do something a bit different, and add a hint of mystery to the game.  The West Germans had 4 to represent their force – 1 of which was a dummy.  They did not have a significant impact on the game or slow it down – but both players enjoyed not knowing what they were facing.

The blind was removed if the West German player wanted to reveal it, shot or moved within LOS of a Soviet Unit.  Otherwise the Soviet player had to Observe the blind as part of a shooting action.  I wouldn’t bother using them in a larger game, but in such a small game it worked well. 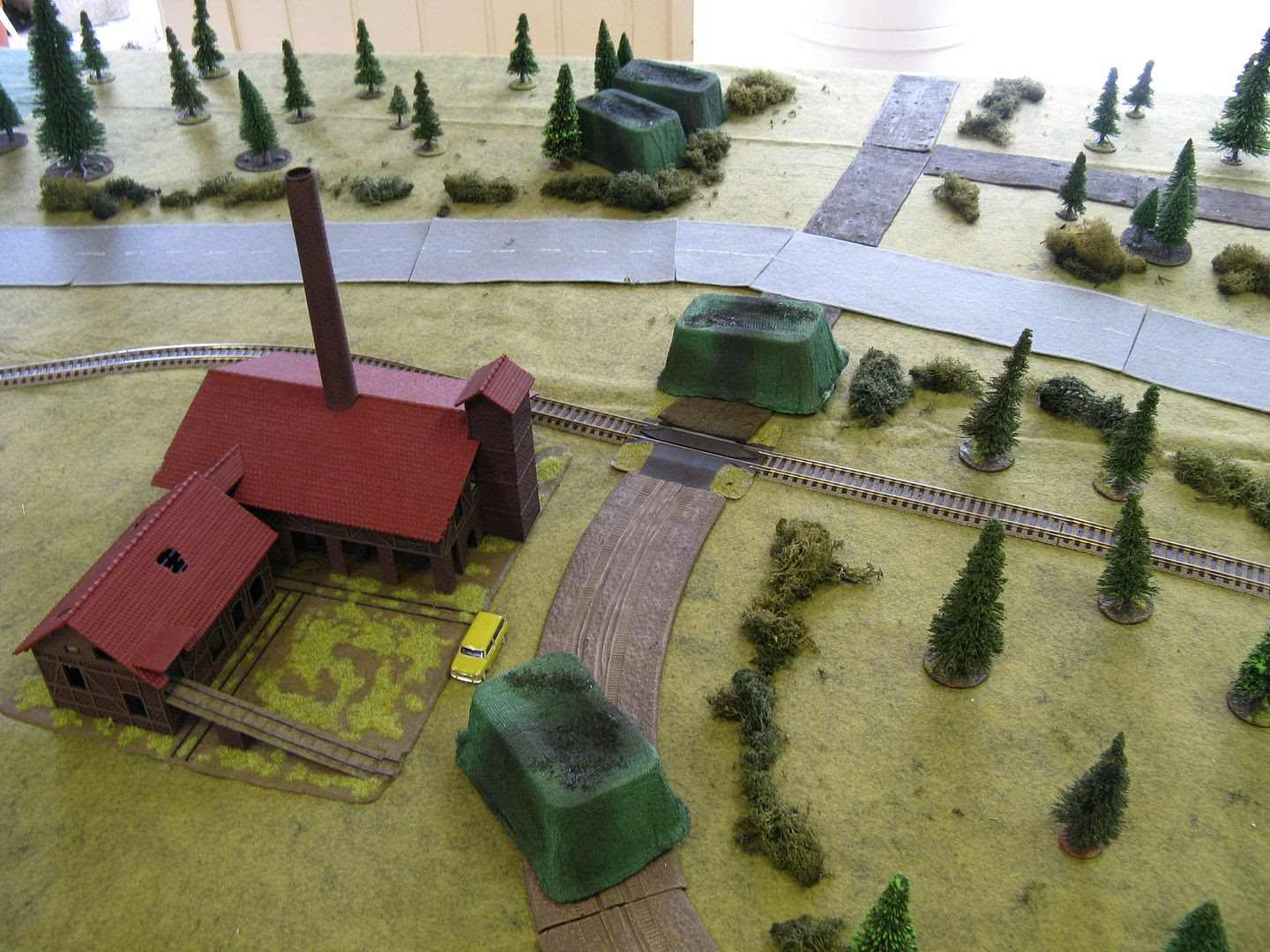 The Soviets drove 2 units straight down the main road at speed: 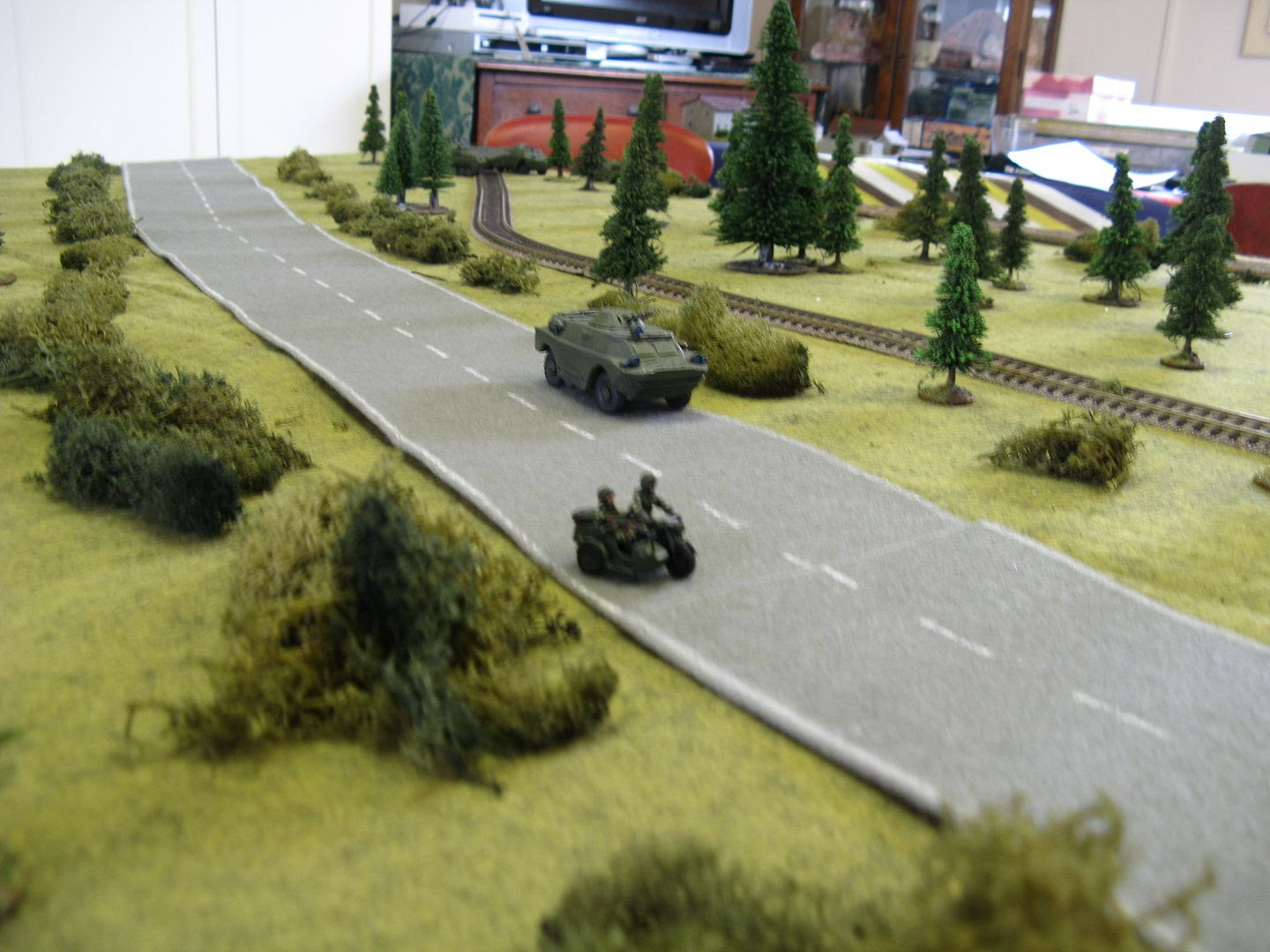 Sorry for the crappy photo...

One Luchs revealed it self and opened fire... 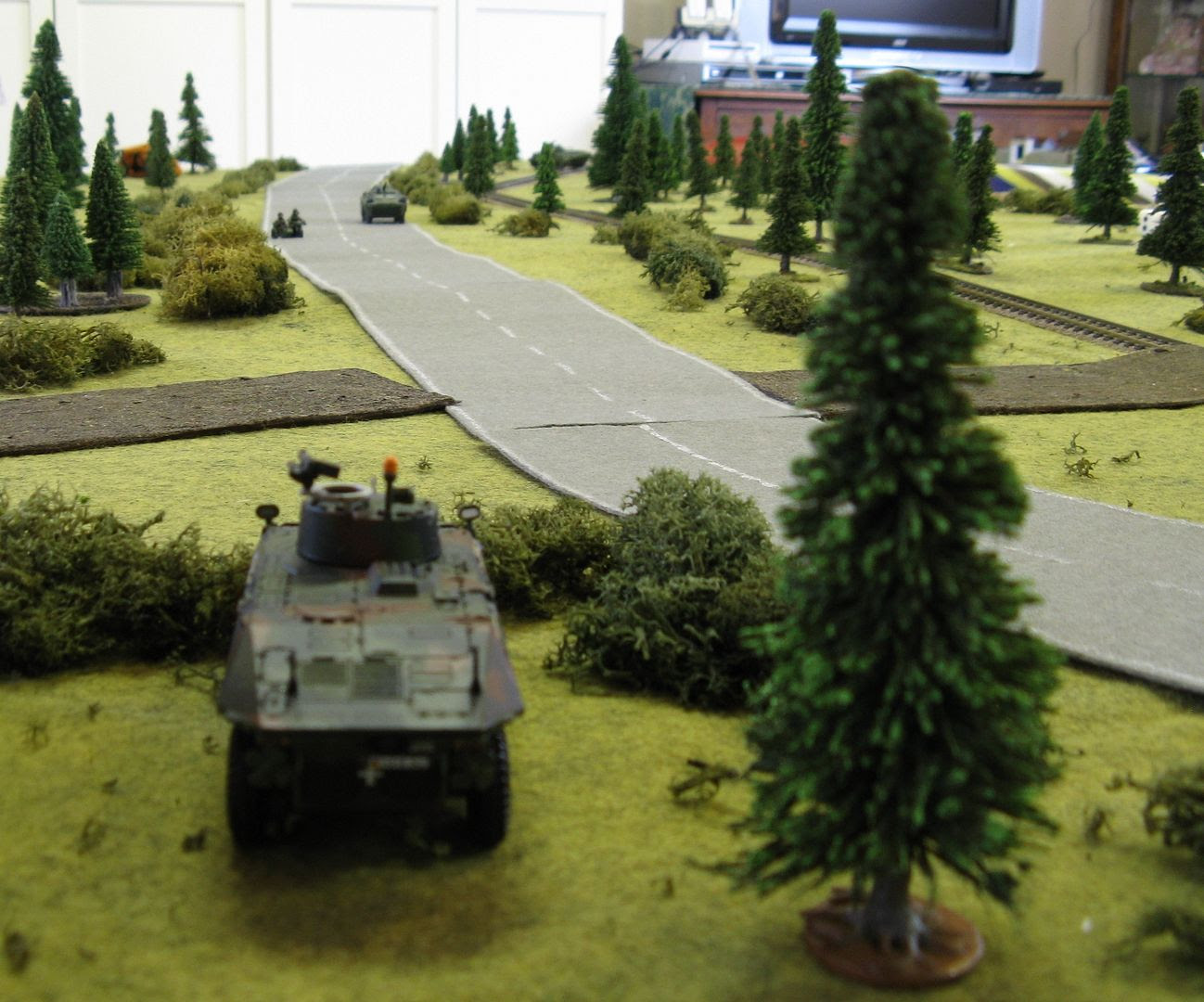 ... and missed.  This setting the tone for the West Germans for this game.

But the Soviets kept coming 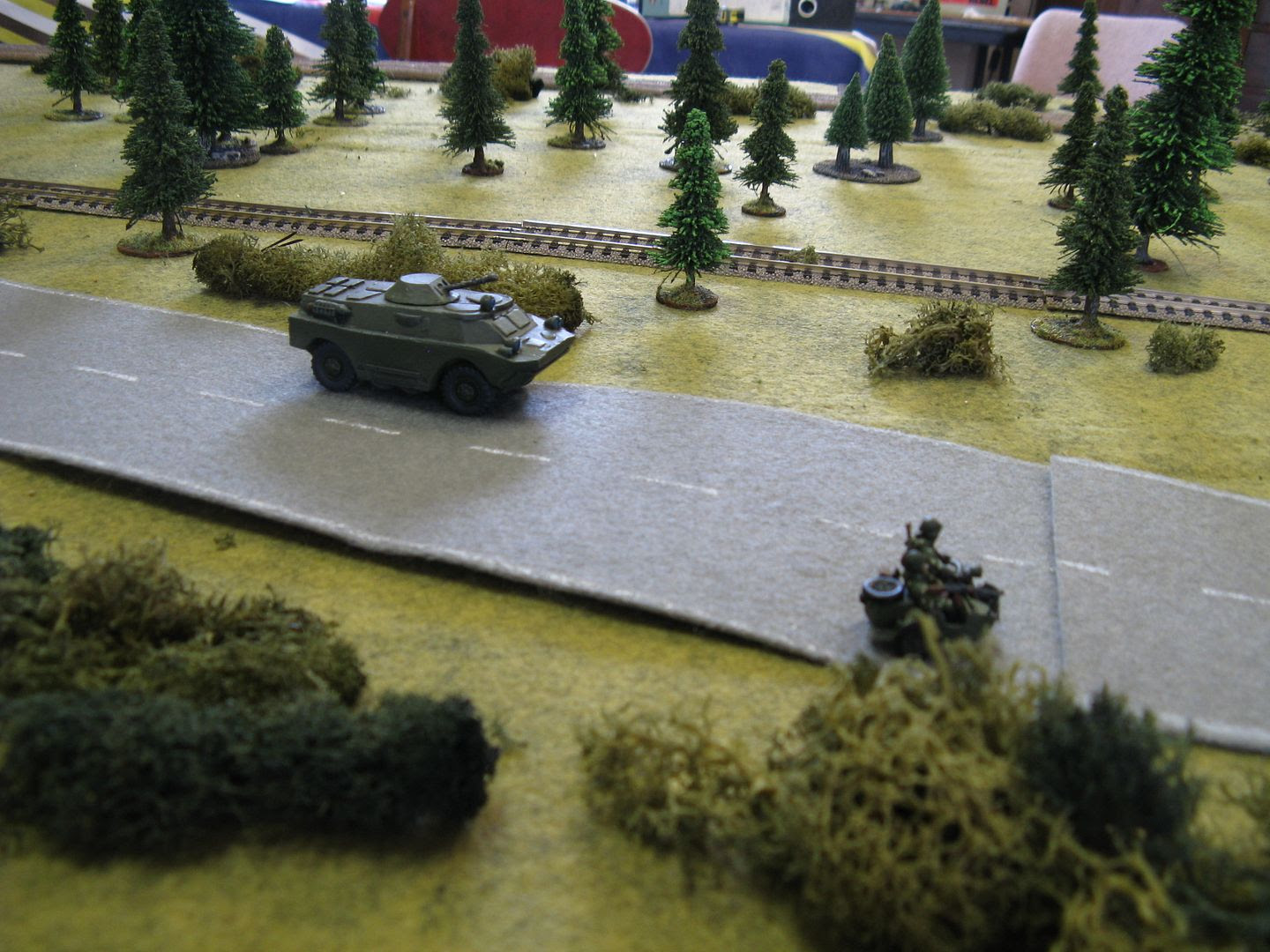 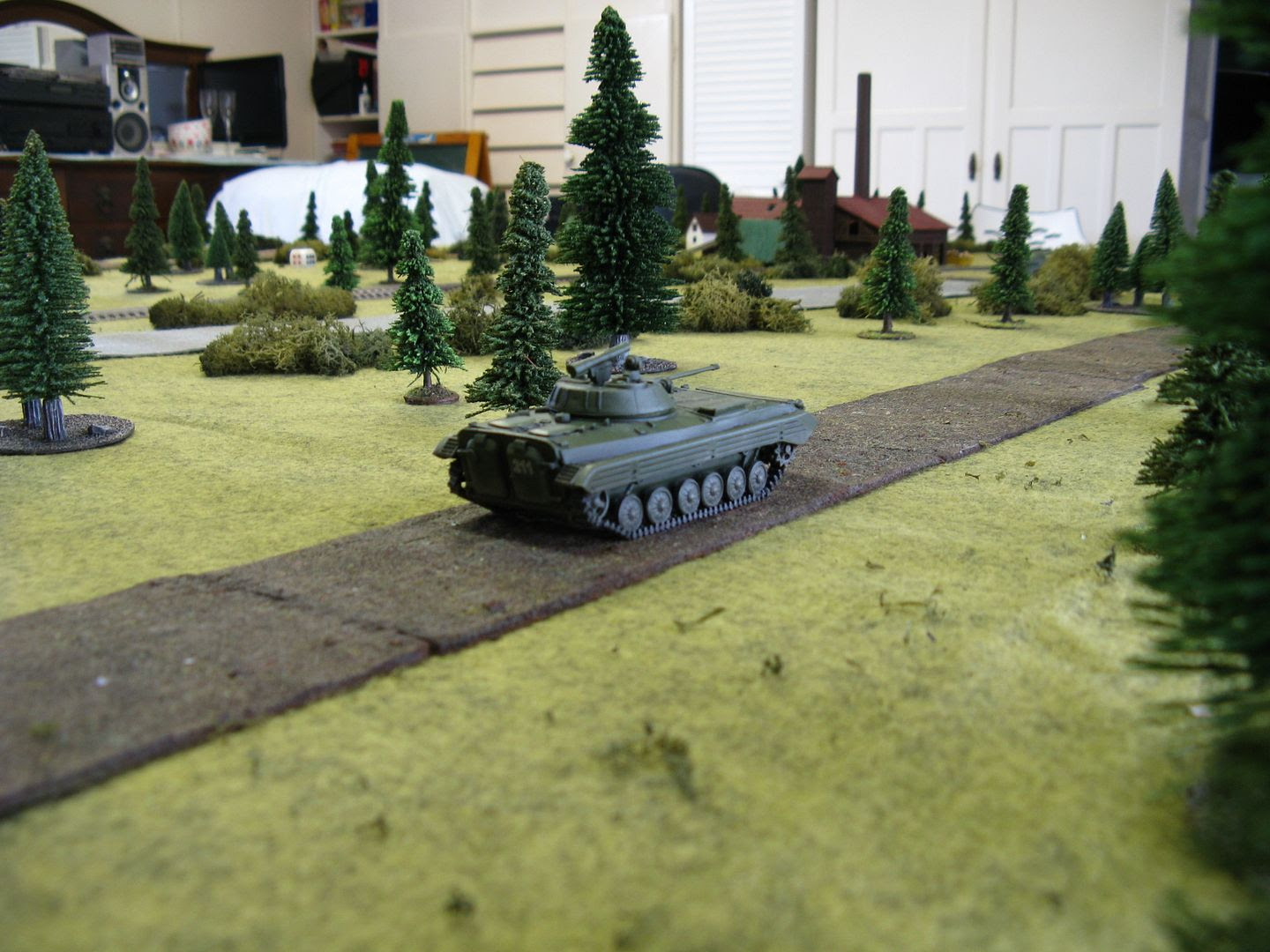 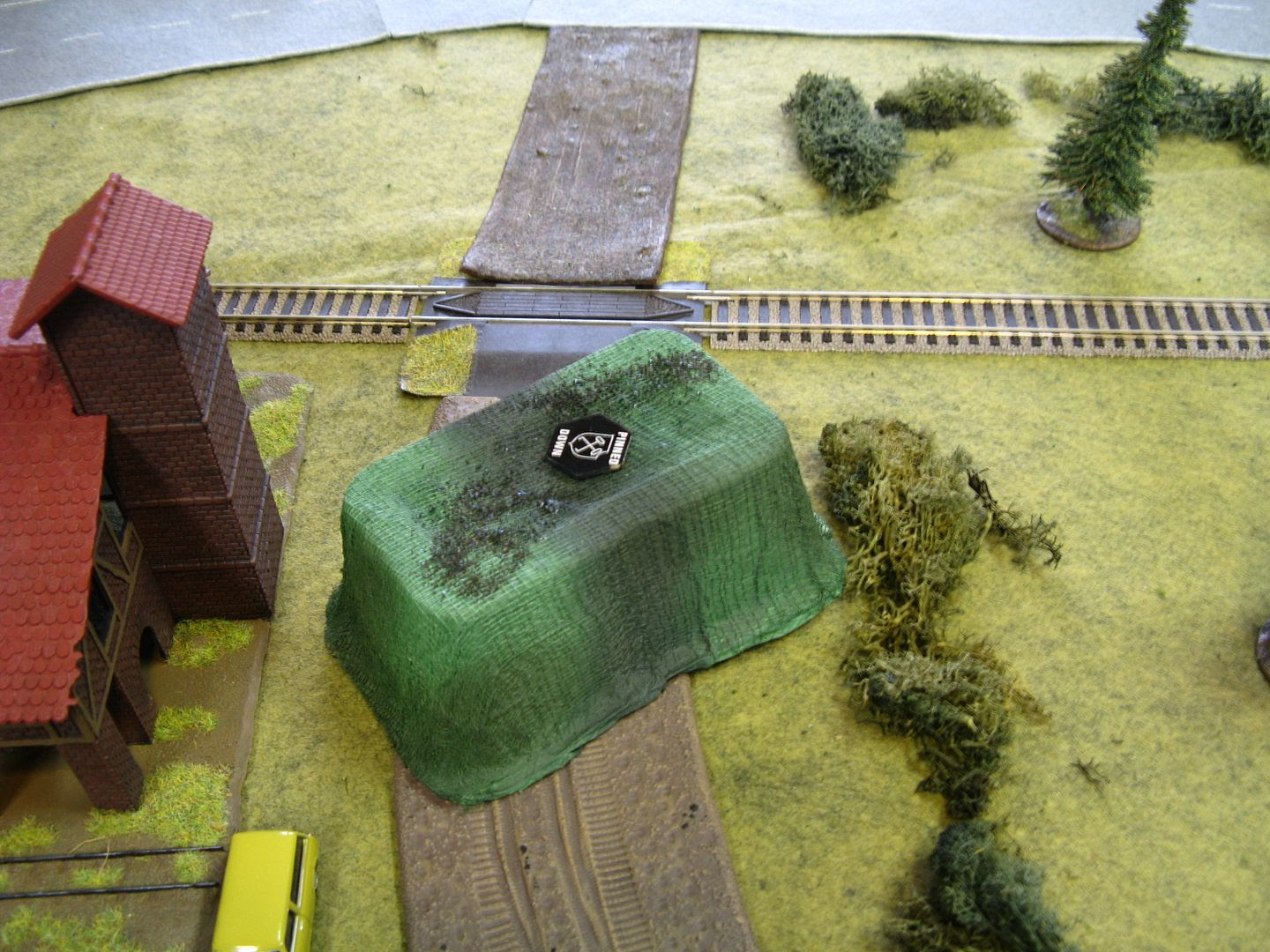 And the Motorcycle combination cruised on by with not a care in the world!  One more turn and it was off the table The BRDM-2 pulled up and decided to have a crack at the pinned Luchs - not knowing if its 14.5mm heavy machine-gun could even penetrate the Luchs.  It didn't... but it caused a Morale check and the Luchs crew took that opportunity to abandon their vehicle 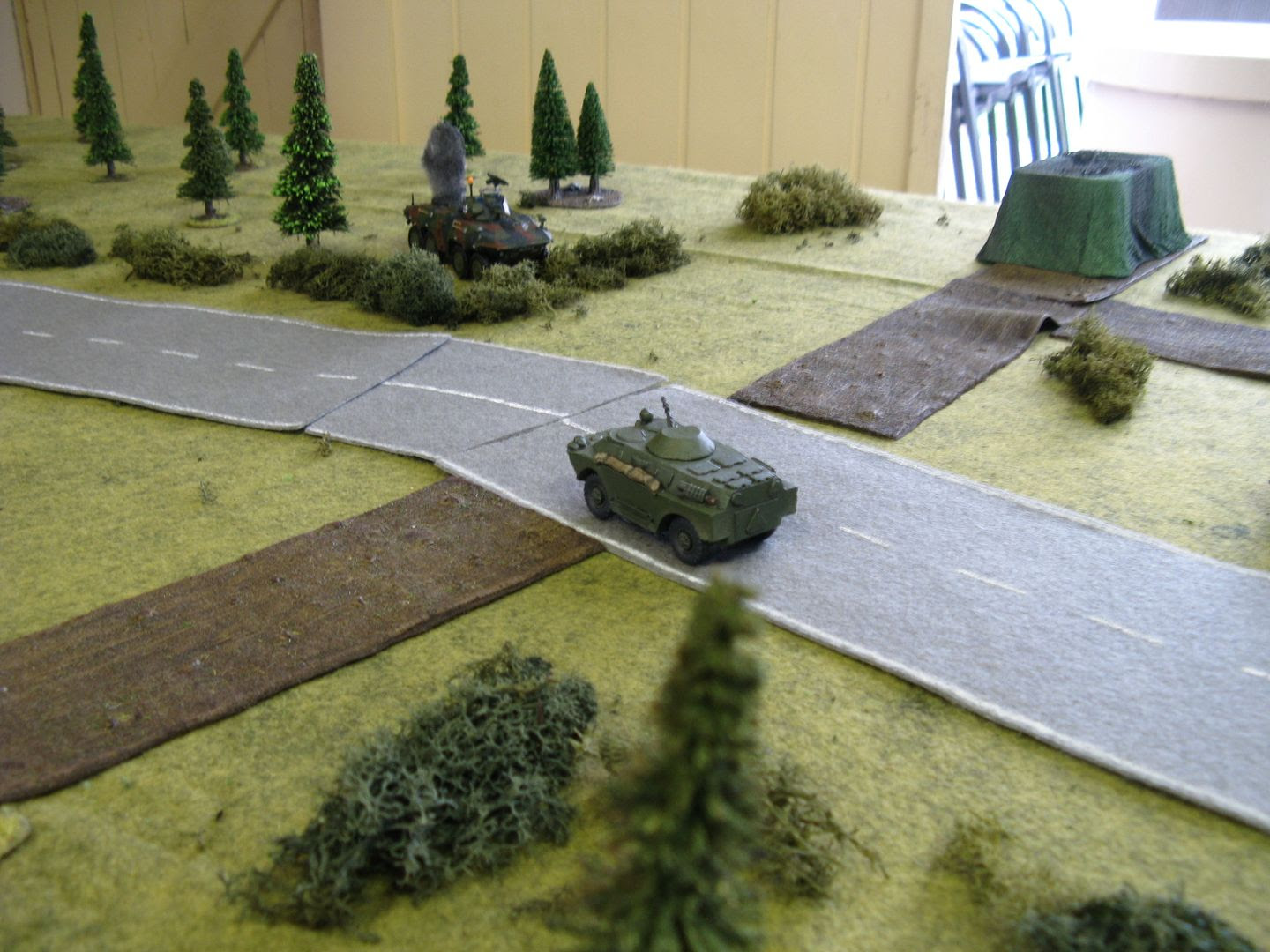 The BRDM then drove off the table, after the other Luchs tooks some more shots at it and missed (see what I mean about the German shooting).

After unpinning all the blinds were removed leaving the centre of the table looking like this - after the Luchs in the foreground takes a long range shot at the rear of the BMP-2 - and of course misses. 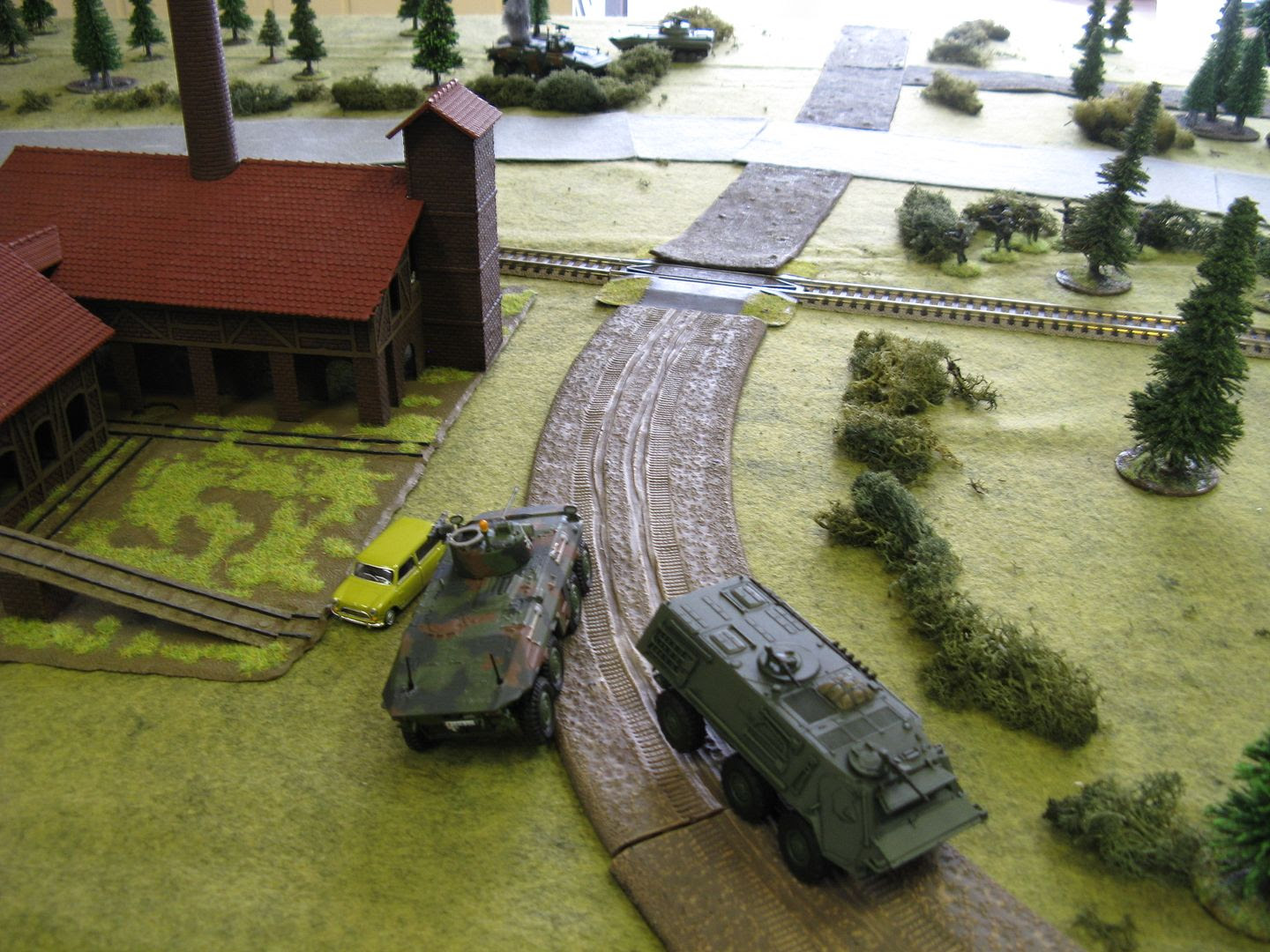 You can see that the West German infantry has dismounted and moved up to the main road. 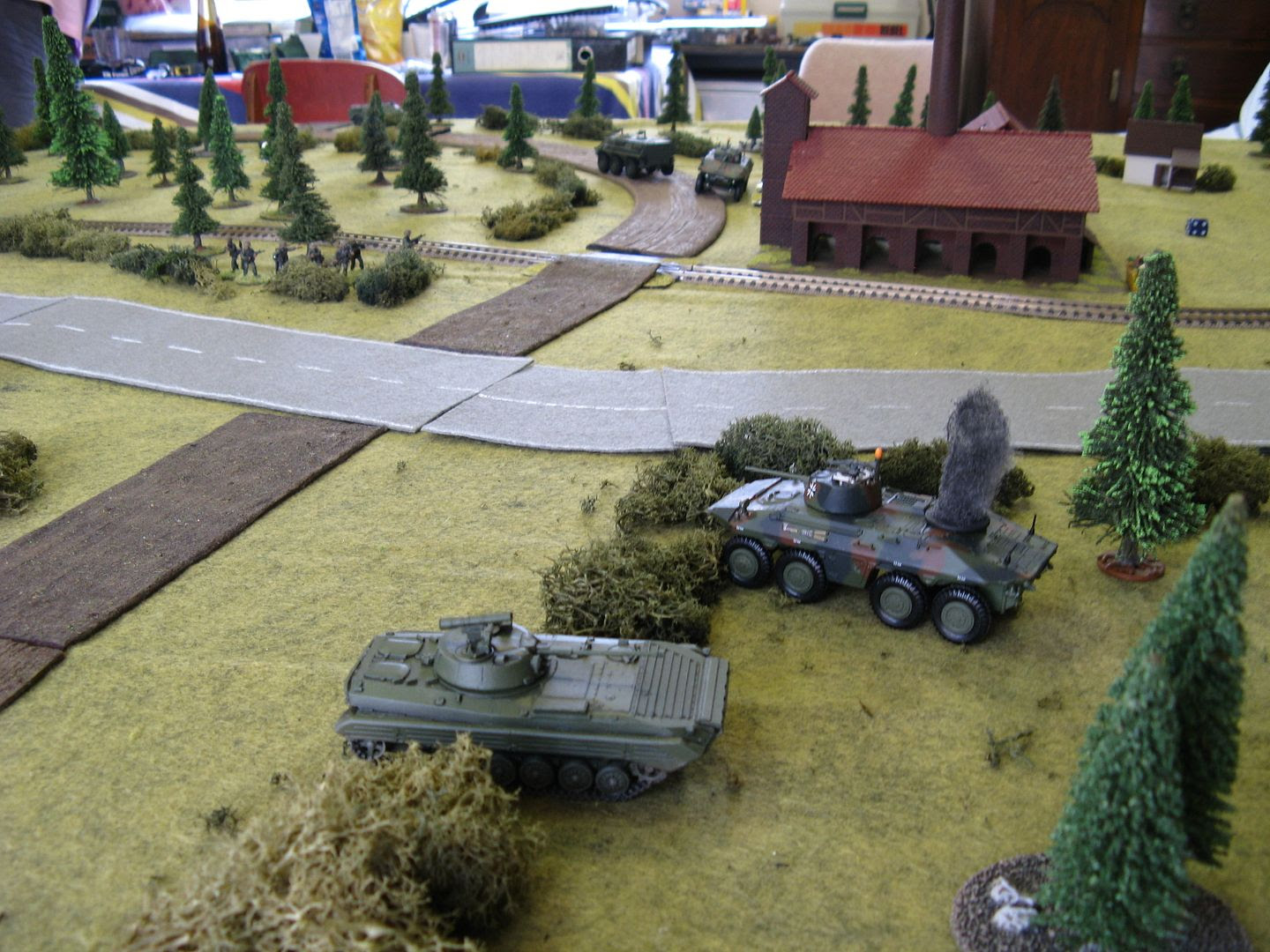 The sole BMP-2 moves past the abandoned Luchs.  German infantry across the road eye it off. 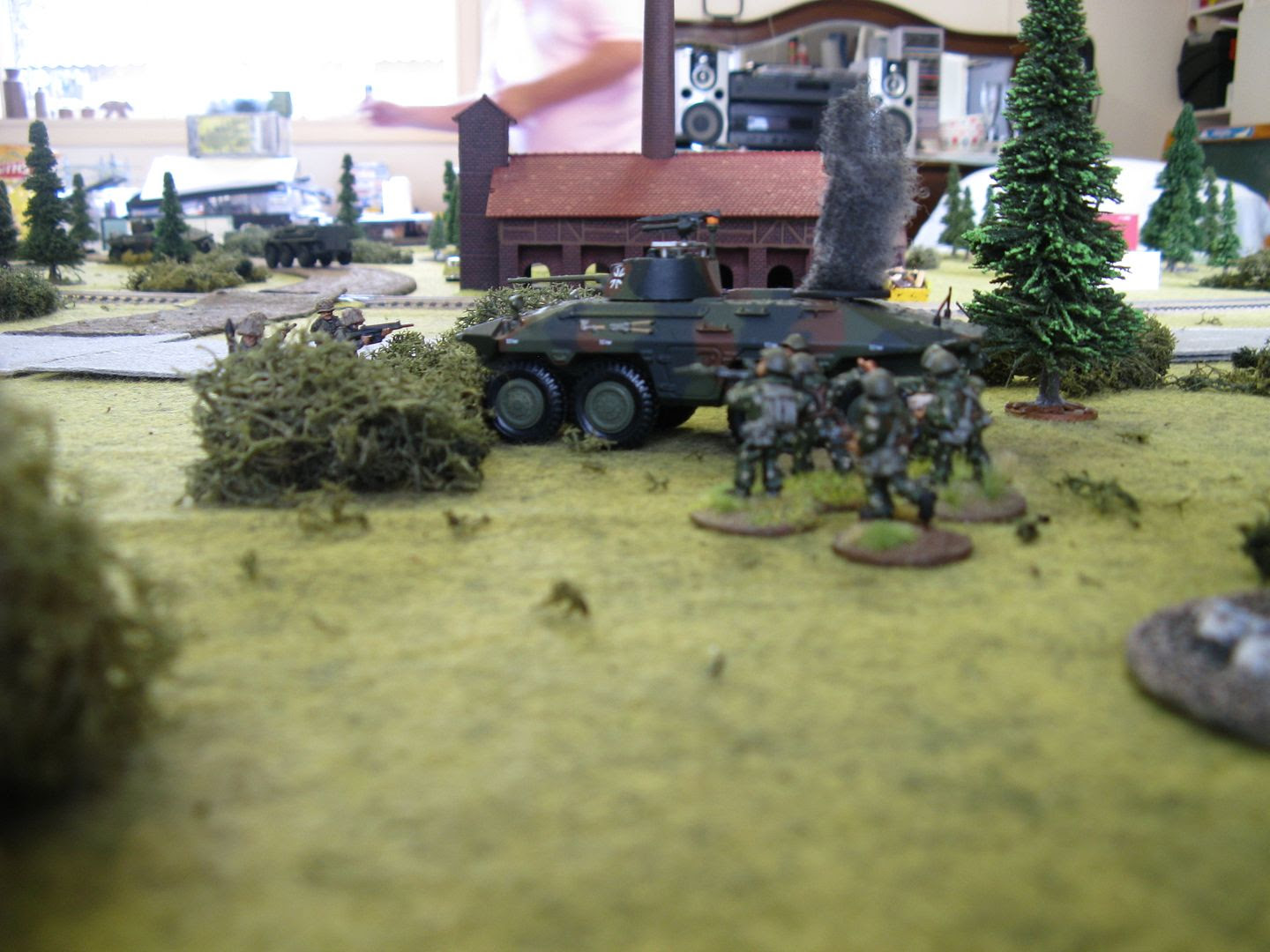 The West Germans moved up - so the Soviets decided to dismount their own infantry and inflict some more damage on the Capitalists.  This does not go to plan and in the one turn of events that goes the West Germans way the whole game, the Soviets fail to spot the enemy in the undergrowth.  They are then unceremonially gunned down in the next turn by the West Germans.  The BMP-2 drives off the table... Meanwhile, up the other side of the table the other BRDM-2 carefully makes his way through the woods.  He is being chased by a Luchs, which never quite gets within 4", so able to attempt to spot and shoot at the Soviet AFV.  The BRDM-2 slips of the table edge - leaving the ineffective West Germans to wonder what the hell happened.

So in Game 2, the Soviets will have added to their force - 2 x BRDM-2, 1 BMP-2 (with no dismounts) and 1 slightly heroic Motorcycle Combination.

The West Germans will have an additional Lucha and Fuchs with all the Fuchs's dismounts.  Hopefully the Luchs crew will get some shooting practice in before the next engagement.

Richard
Posted by RichardC at 7:37 PM