Just a few quick pics updating where this little project has progressed to in the last few days: 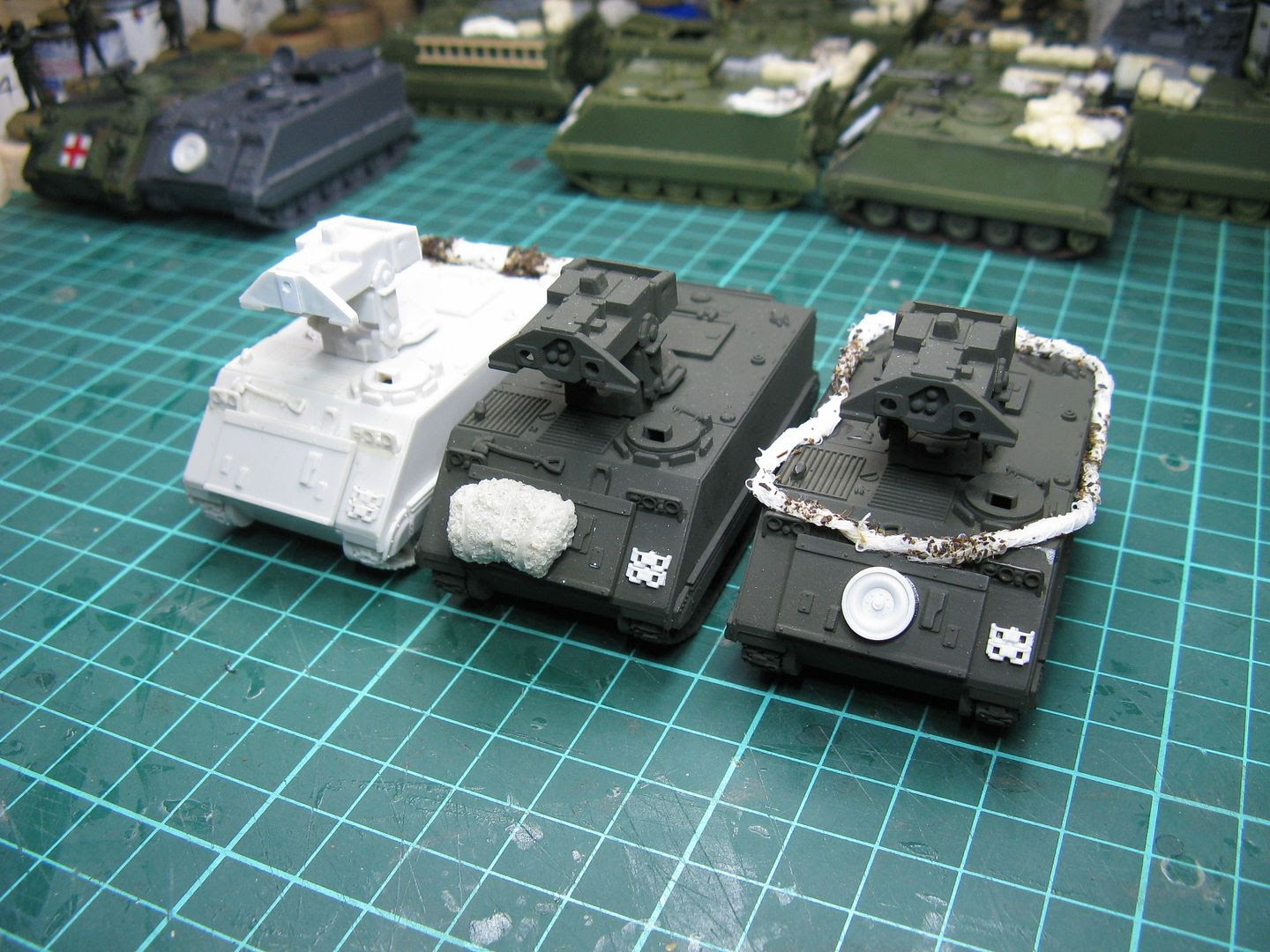 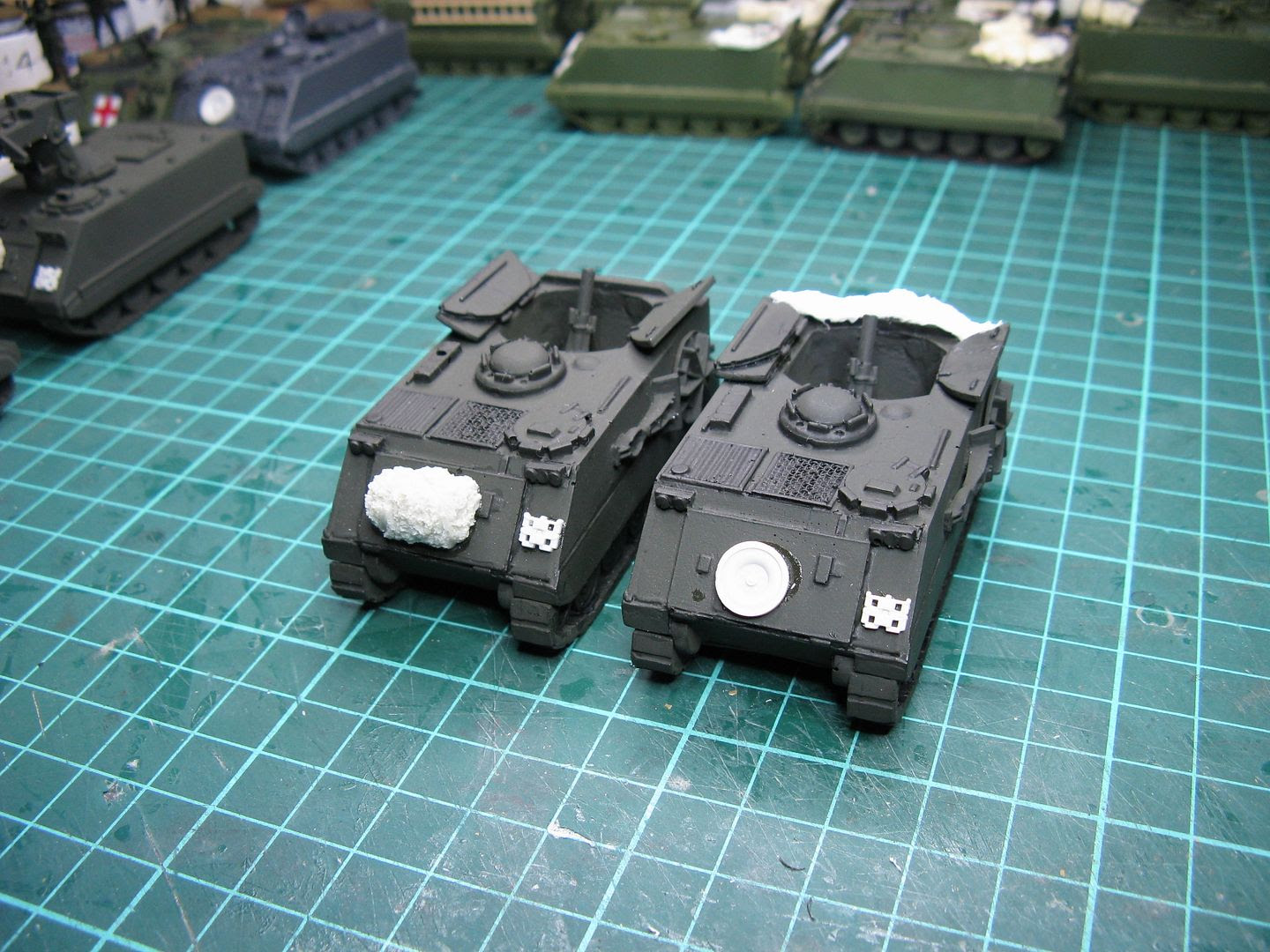 These "specialist" vehicles have all had cam nets added.  I had some spare bits from an old ESCI M113, so have added spare track links to all the AFVs and additional wheels to a couple. 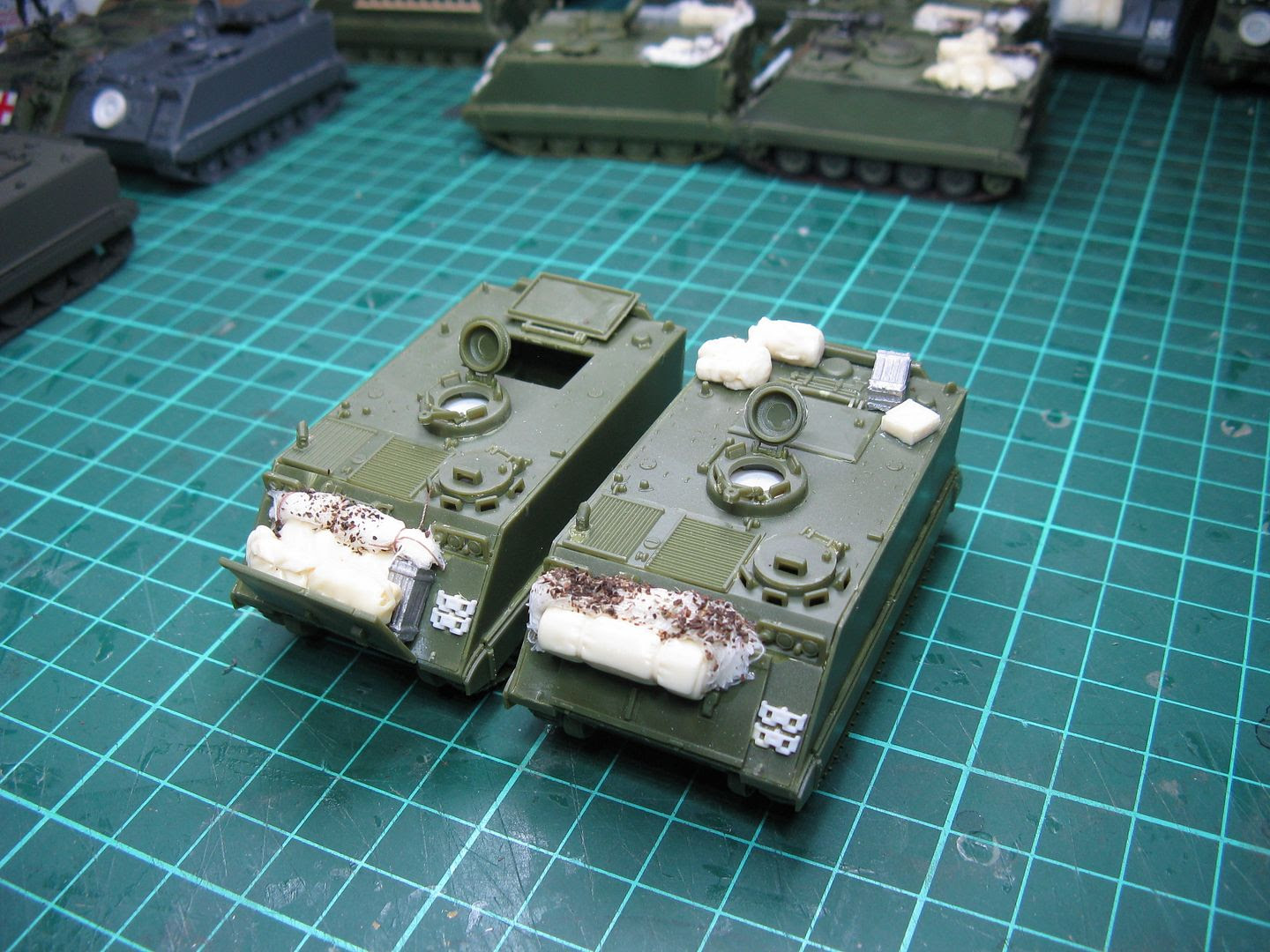 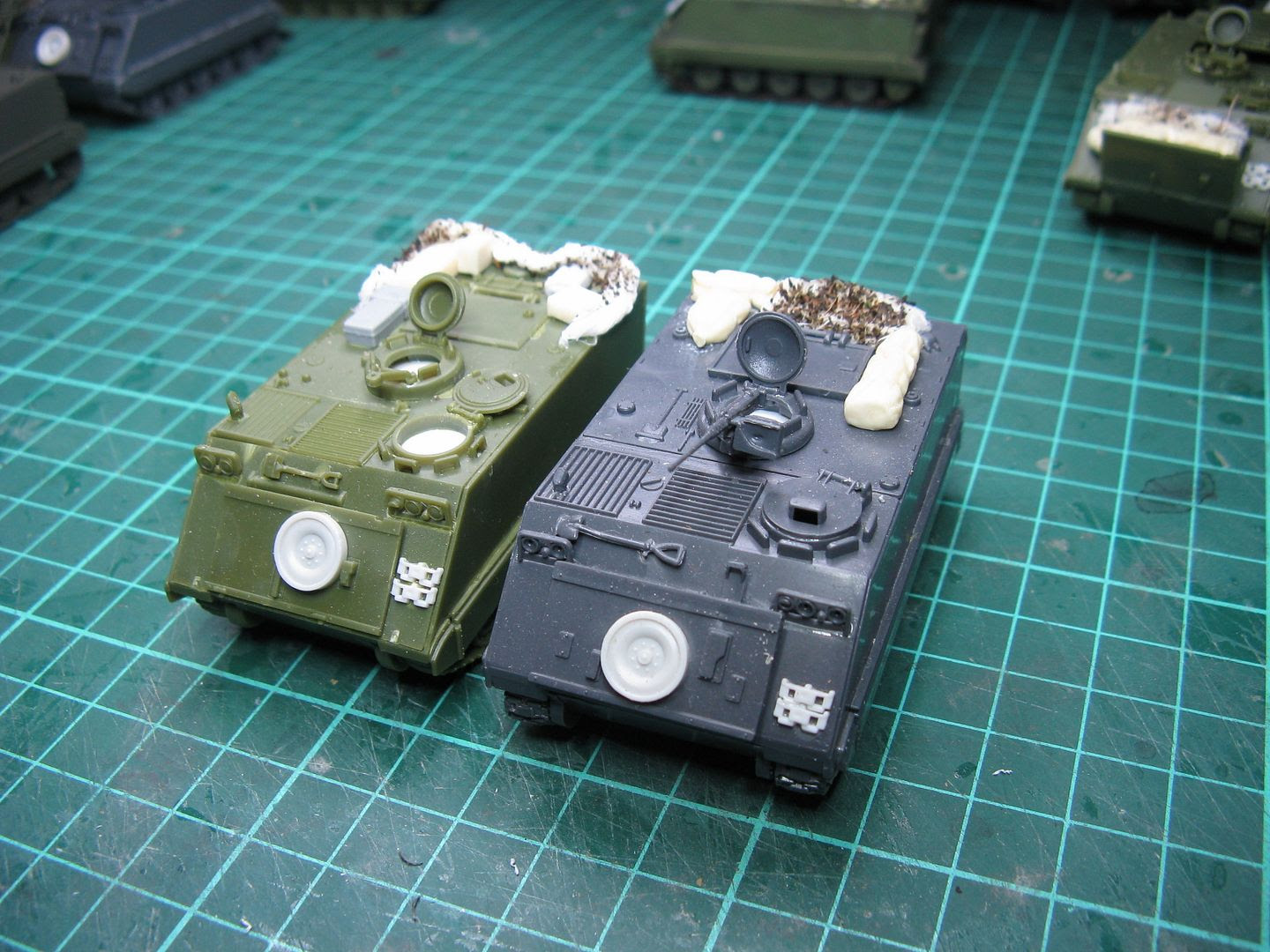 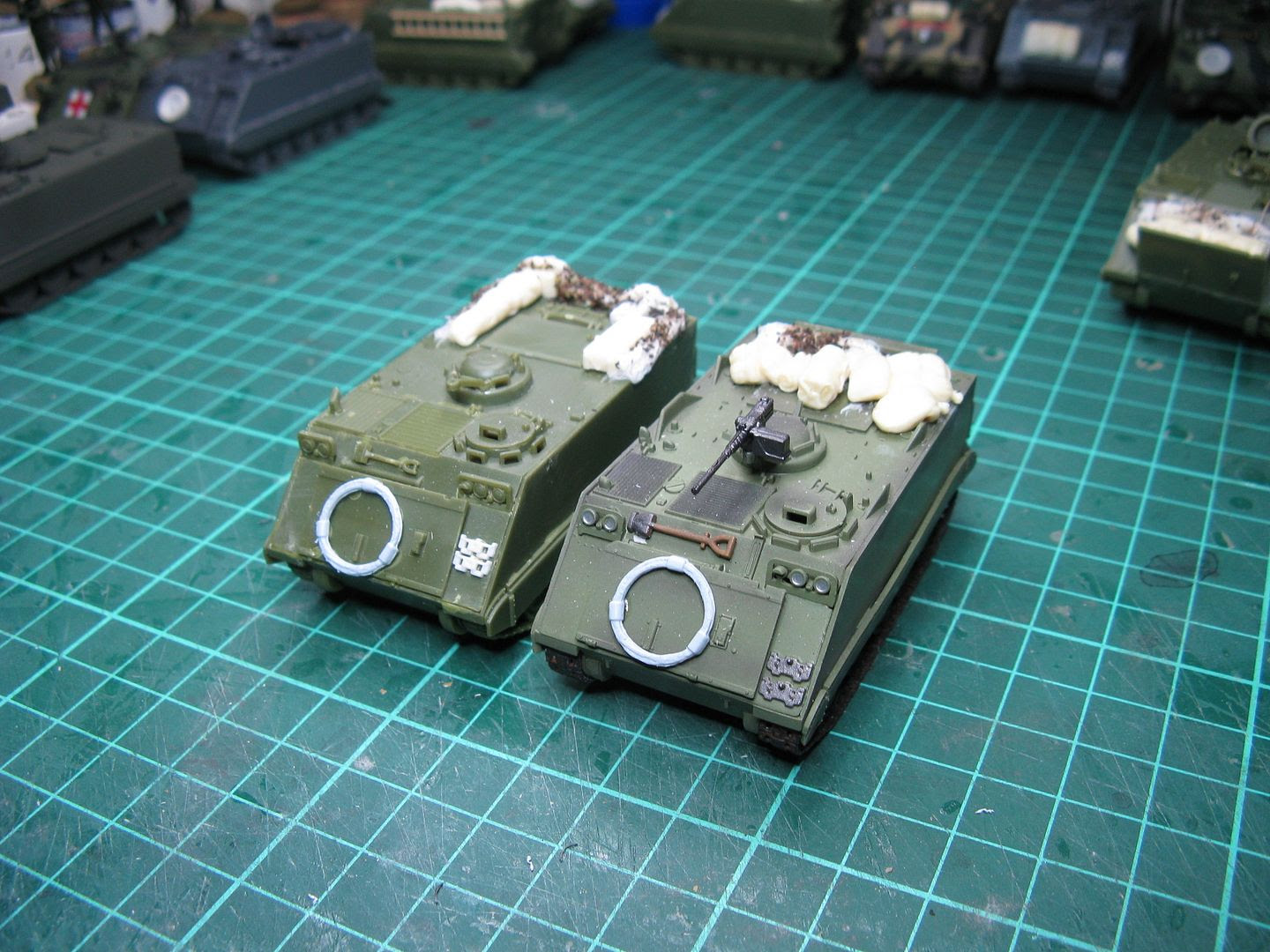 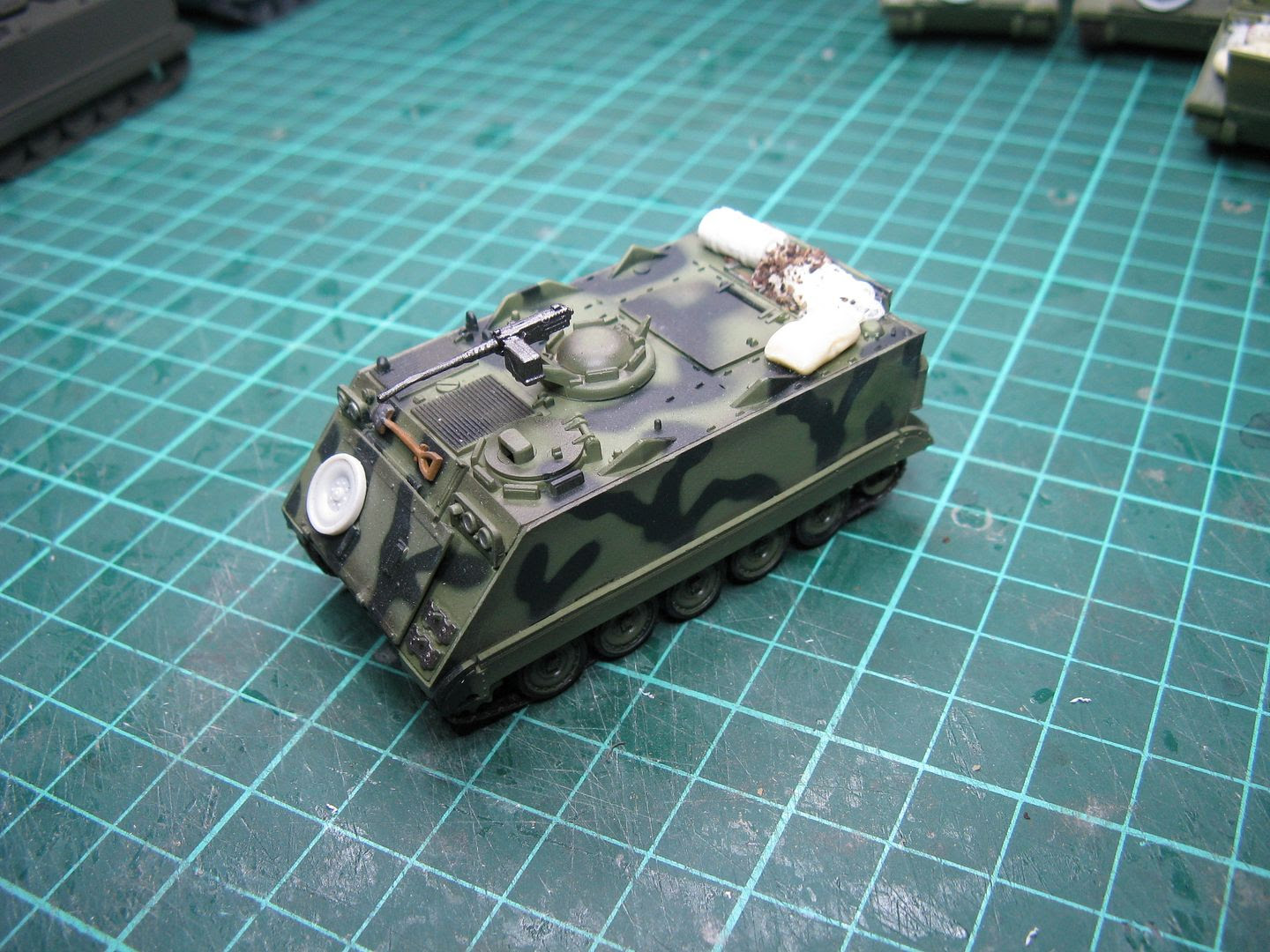 All these have had additional stowage added and cam nets. 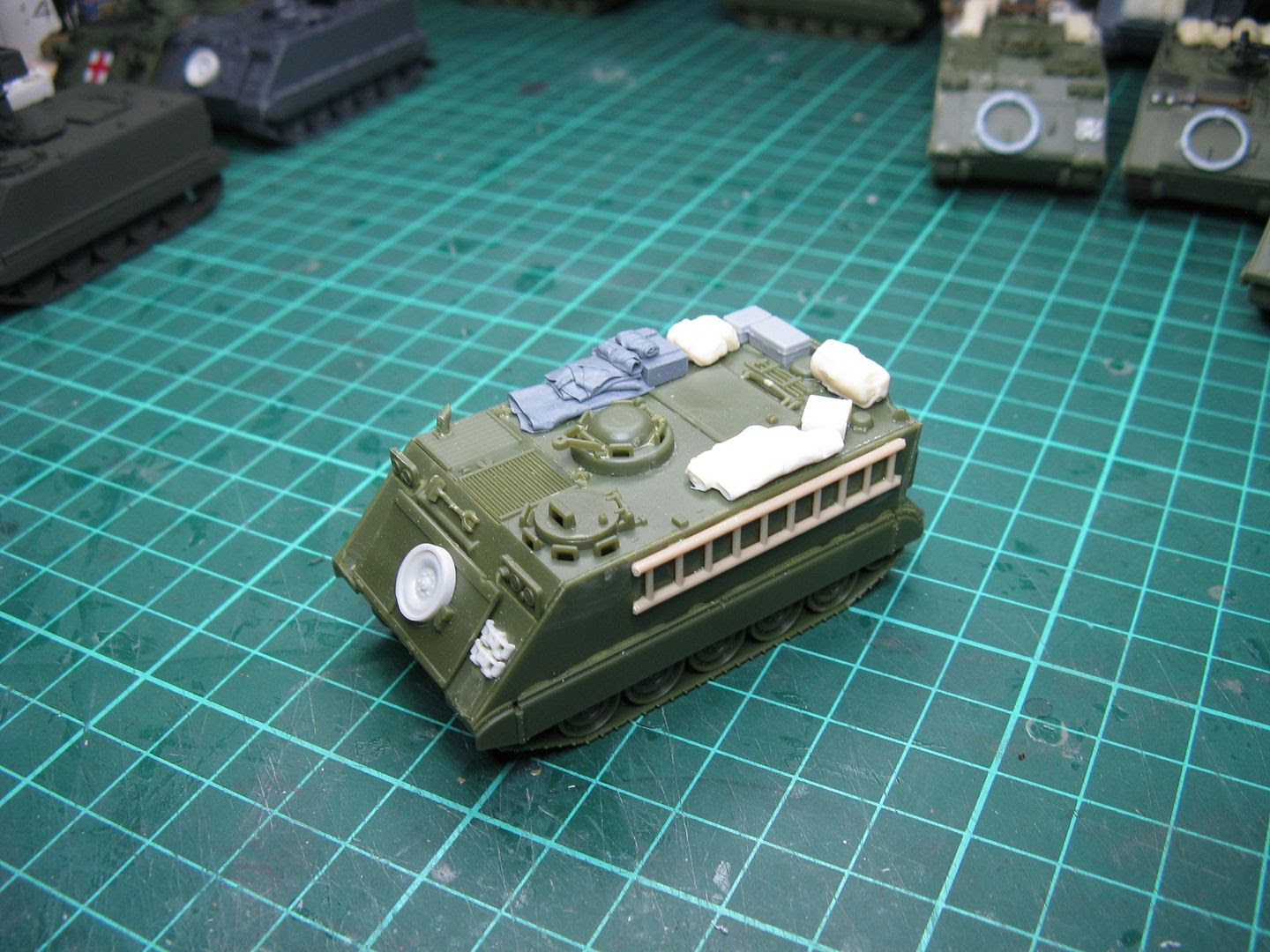 I plan on using this one as either a standard APC, or if I need a "special" M113 - like an engineers vehicle or something like that.  I like the ladder and can imagine it being "borrowed" as someone thought it might come in handy. 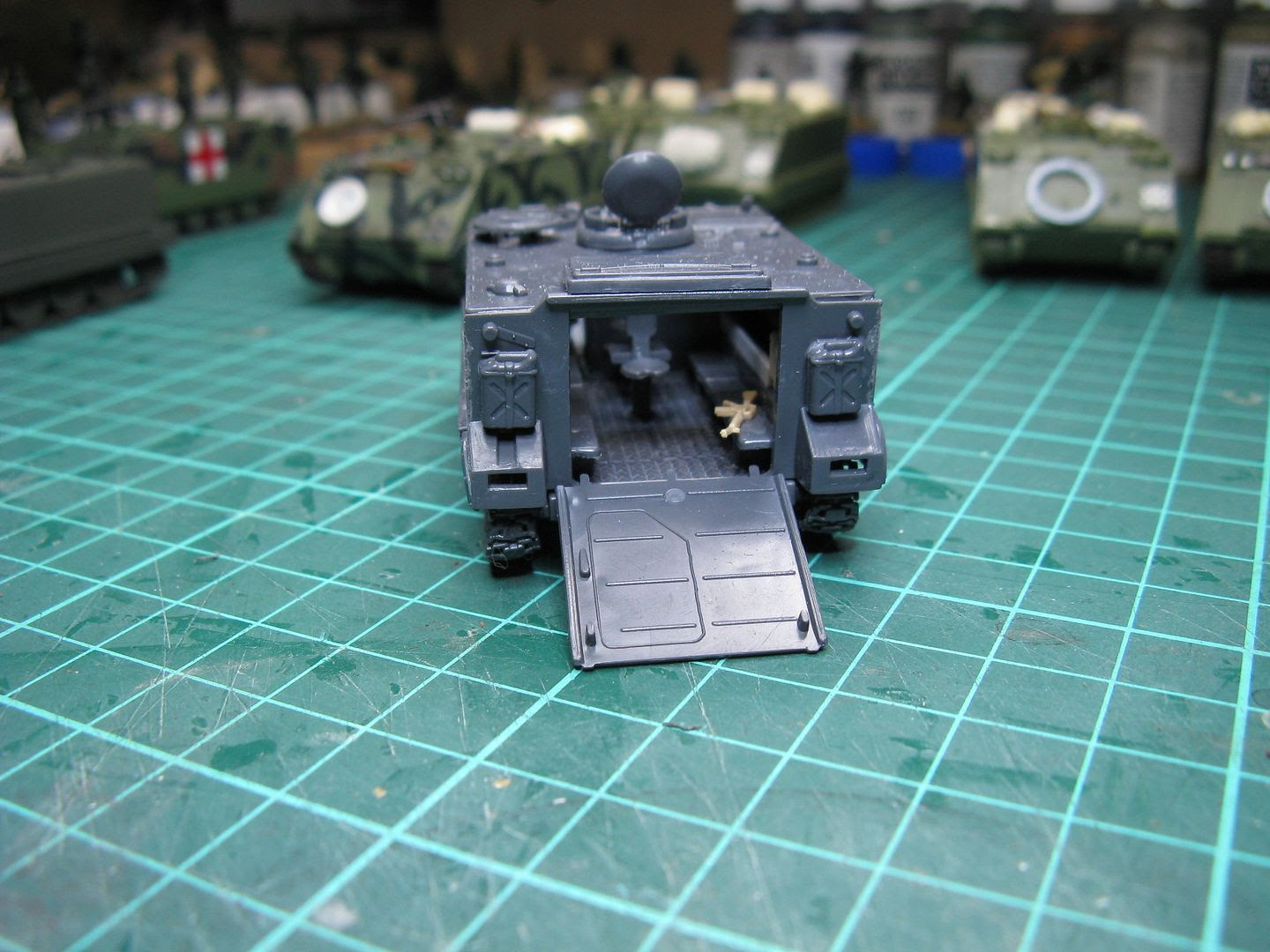 This will be my command track, with a full interior.  It's an ESCI kit with a few bits and peices added on the inside. 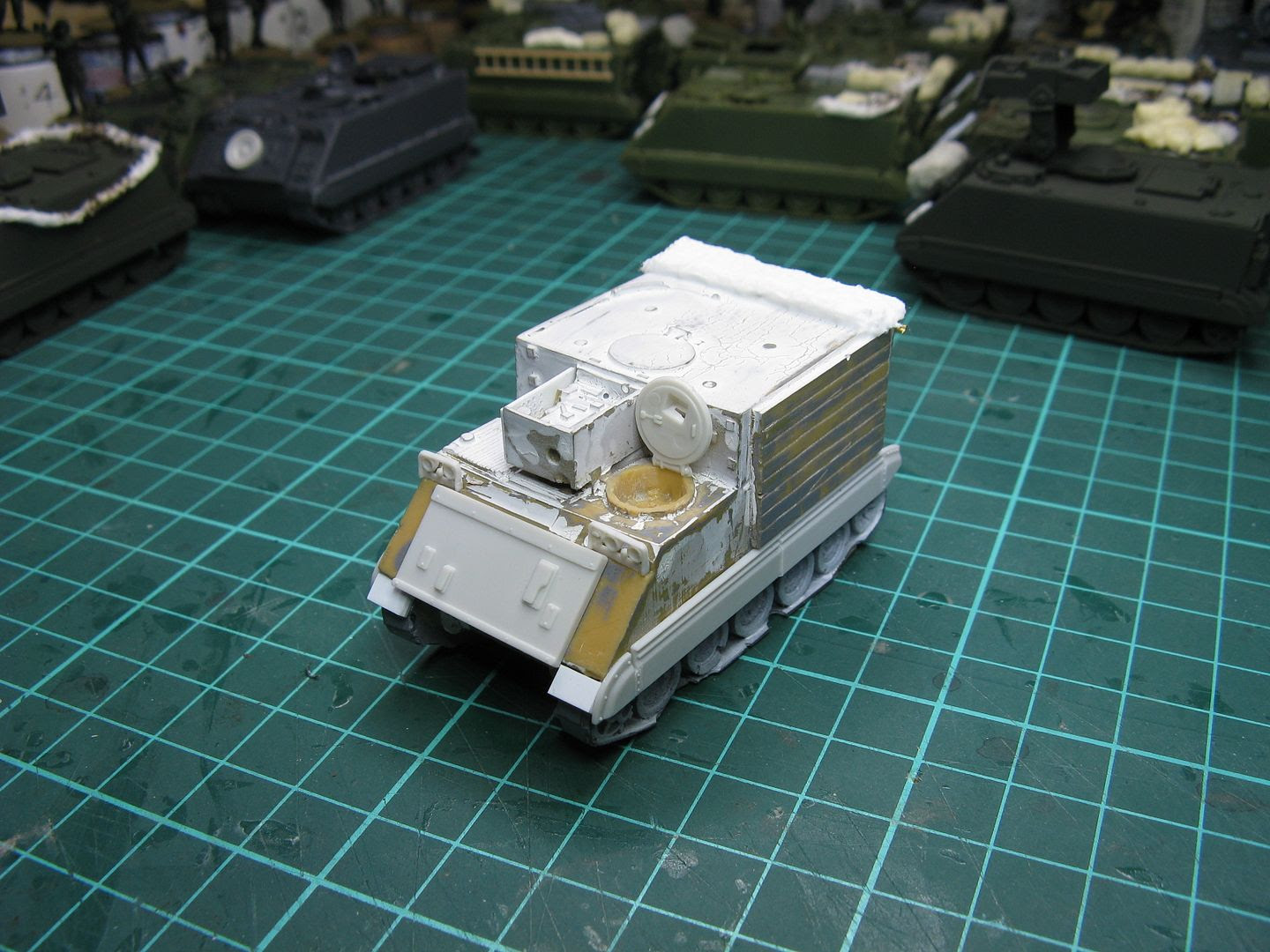 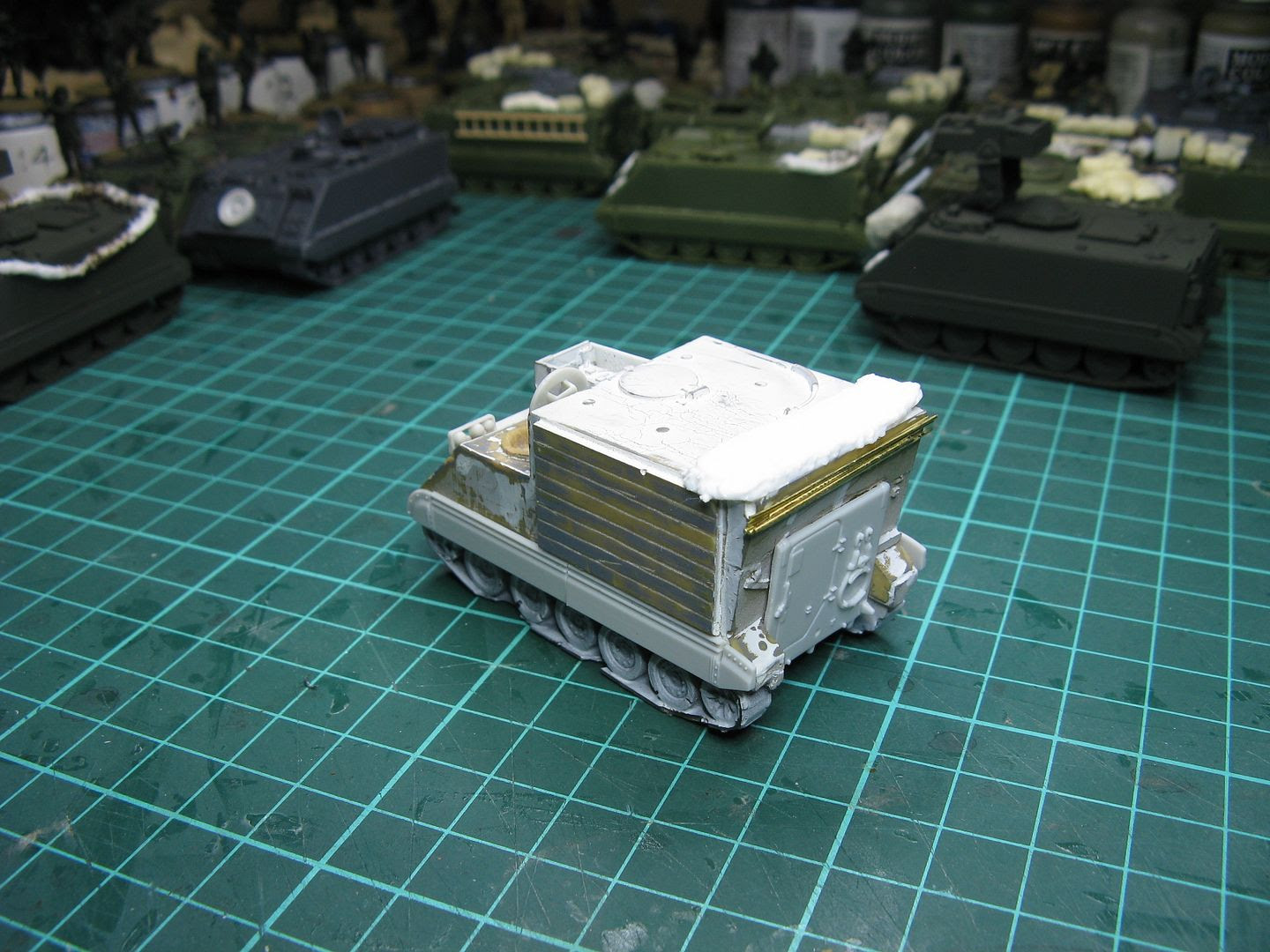 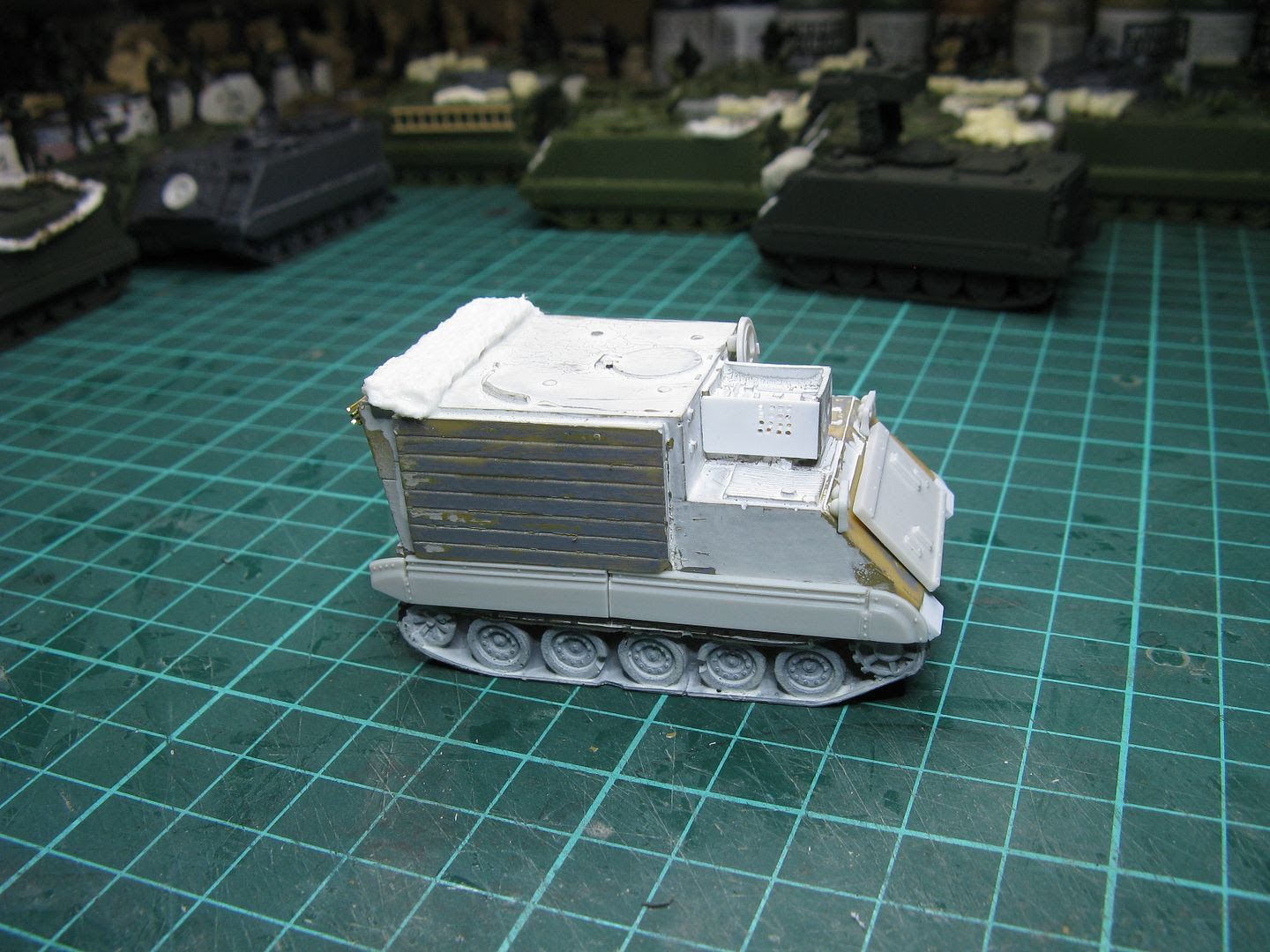 This is my not-so-quick, but still dirty (and not 100% complete) conversion of a S&S Models M577 that I got a couple of years back from a mate.  I wasn't happy with the amount of detail on the back or front, part of the generator (and tracks) had been broken, and I wanted to see if I could make it crewed.

So I've added a number of ESCI parts - the rear ramp, the trim vane, headlights, track guards (cut-down) and driver's hatch.  To fit the 1/72 track guard to a 1/76 model, it needed to be cut down - and is still not perfect as you can see in the middle photo at the rear.  I also had to add so plastic card mud guards at the front as this was missing.

It took a while, but I drilled and dug out the drivers position, and have the hatch open, so it can now be crewed.  I need to add back the drivers periscopes.

I filed down the side of the generator and added a thin peice of plastic card, which I drilled a few holes though to represent what it really looks like.

I also added a large cam net to the roof and tent poles to the upper rear, as that's where they were stowed.

The tracks also need to be fixed, and I should add at least 1 jerry can to the rear and maybe some more stowage on the roof.

So whilst it's no where near perfect - it's good enough for me.