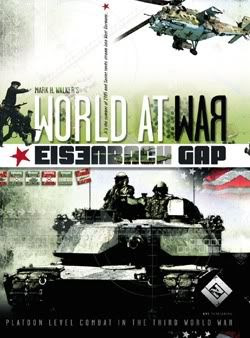 A few weeks ago I went down to Canberra for the Annual Wargaming Convention there: Cancon. This year I went solely as a shopper rather than playing in any tournament. I'm rather chuffed with the result - in that I managed to pick up 3 boxed wargames, some 1/72 kits and a couple of 120mm mortars for my Soviets.

One of the games I bought was Lock 'n Load's Eisenbach Gap as seen above. I managed to get it second hand and complete - as in it wasn't missing anything! 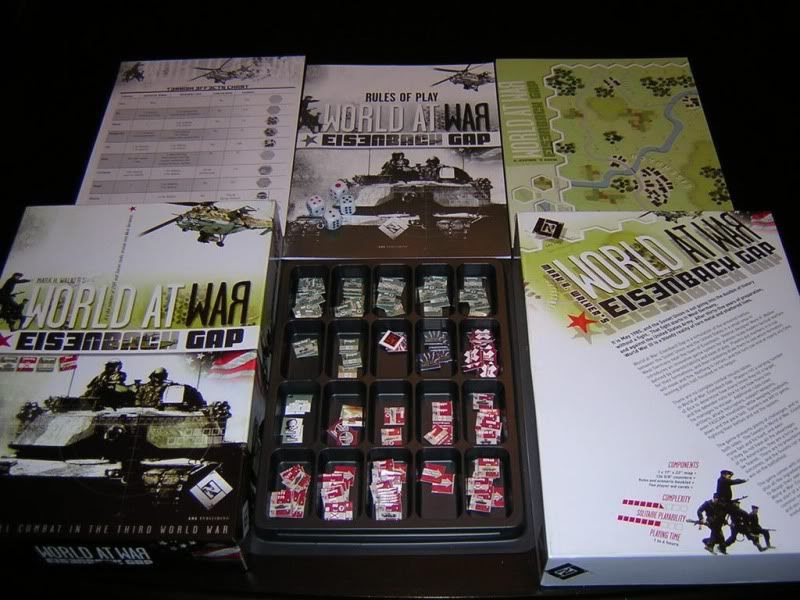 Over the weekend I got to play it for the first time in a solo game. At least this way I was guaranteed to win (and to lose...)

I've made up a dodgy AAR - I'm sure many could do it much more nicely - but alas - all my desire to do so was not matched by an appropriate computer program (or the skill to use it!) 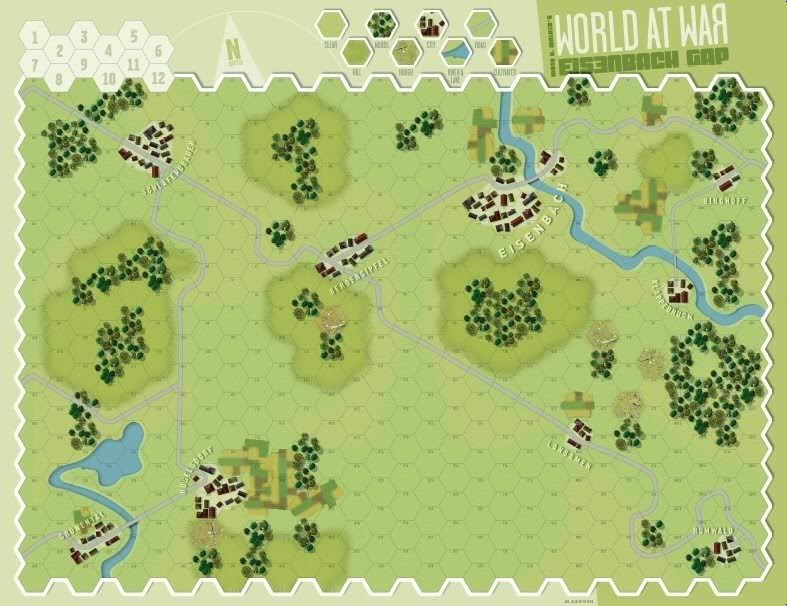 however the actual playing area for the first scenario is more like this:

The Soviets are attacking from west to east across the map (couldn't really work this out in my head - but hey - I was just doing what the scenario said to do). They have 10 platoons of T-72s and an HQ. The US (Team Yankee - almost straight from the book it appeared to me) had 2 M1 platoons, an ITV platoon, and Infantry platoon with a Dragon ATGM and an HQ. This shows the initial set up of the game: 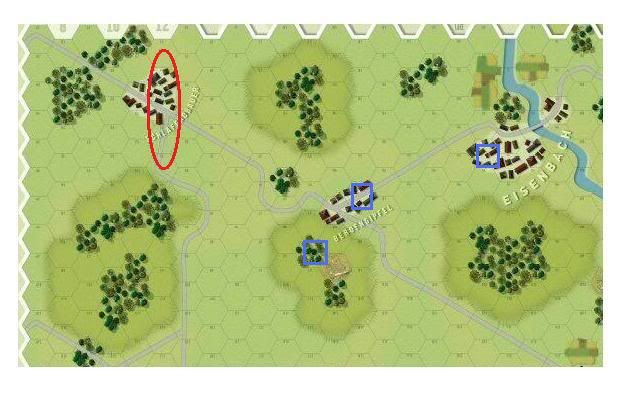 The Soviet set up (the red oval) is pretty much set whereas the US could set up anywhere from around the two central hills and to the east. I placed 1 M1 platoon in the woods on the hill to the south, 1 M1 platoon in the small central village and the infantry and ITVs in the town at Eisenbach. The US HQ was in the small village with an M1 platoon. The Soviets had to take Eisenbach to win the game - anything else was a US victory.

The NATO Plan was pretty simple. Start defending forward and then withdraw to Eisenbach. The ITV with its good range would defend the town and the infantry would be the last restort.

The Soviet Plan was likewise pretty straight forward. Beyond the obvious crush the imperialists - it involved taking the northern hill quickly and while part of the force swung around to take Eisenbach from the north, the main body would deal with the tanks in the town and the other hill and then attack Eisenbach from the south. 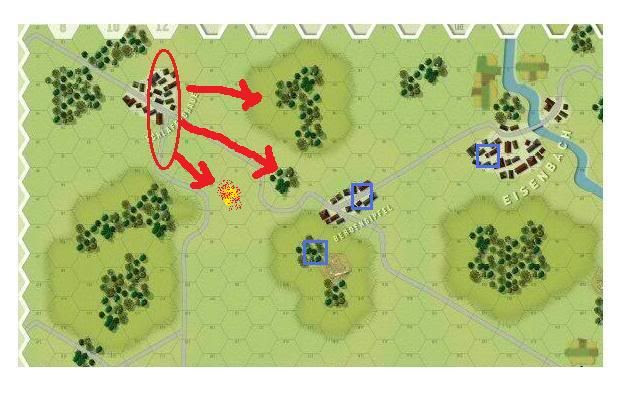 The game started quite well for the Soviets. They got a free turn (special scenario rule) and then I drew their activation chit first, so they got another move again. This got most of them into a pretty good position behind/on the northen hill with the loss of only one platoon. At the same time they managed to knock out the M1 platoon in the central village and degrade the Team Yankee HQ. 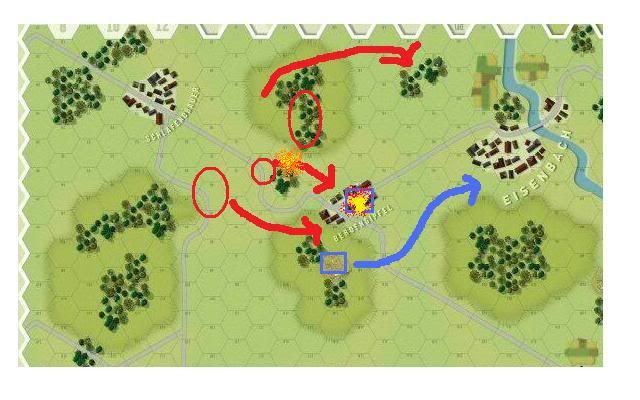 With the centre in trouble, the southern most M1 platoon began to withdraw to Eisenbach, while the soviets also enacted their plan by driving a couple of platoons to the northwest of Eisenbach.

The soviets (read me) then remembered that they had some artillery support so spent the next couple of turns raining arty down on the infantry in Eisenbach. This cunning sub-plan failed miserably and the infantry laughed in the face of the ineffective red artillery. Ha Ha Ha. They proved their contempt further by, along with the ITV platoon, managing to knockout the 2 T-72 platoons hiding in the woods to the Northwest. 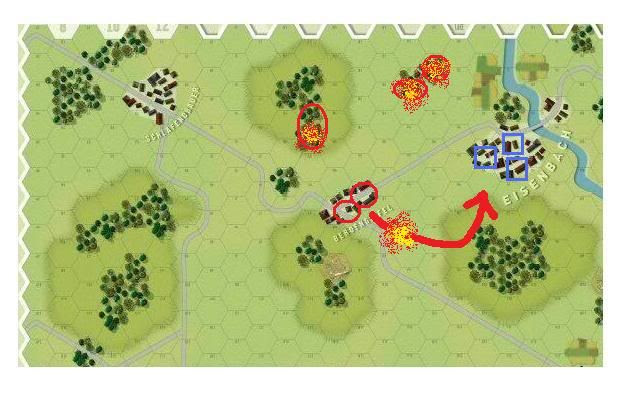 The Soviet attack started to break down here and when a couple more T-72 platoons also tried to drive to the South they got hammered as well, while the reduced M1 platoon and the HQ traded shots with the Soviet units on the hill north of the central village. 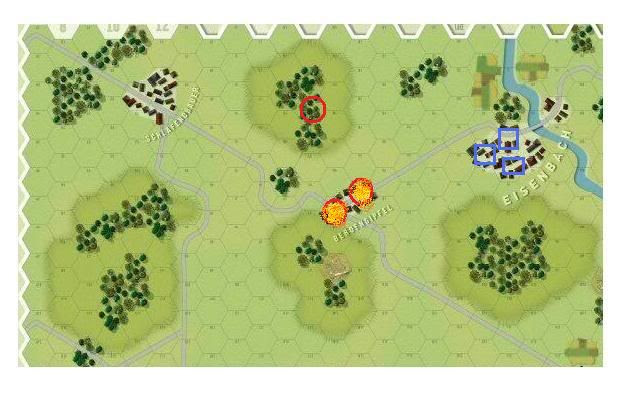 Finally the US forces took out the remaining units in the central village and with only 2 platoons left, the Soviets decided to call it a day.

Unit of the battle:

The ITV platoon was totally awesome and did more damage than any other unit in the game.

Well - my bottom line is that I enjoyed myself. Its been years and years since I played a board game like this and after just 1 game, I started to realise I still loved pushing little cardbaord chits around. I'll be playing this game again.

The grahics of this system are simply stunning. Lovely full colour counters and excellent map board. The counters can be a wee bit difficult to read - but that's me just getting old! I love the activation system and it caused some interesting swings backwards and forwards in the game.

Movement is dead easy and the combat system is pretty cool. I also generally liked the Command system.

Bear in mind that this is after one game - so this may change. There are a couple of things I felt could have been explained better and I think the Player Aid card could have a lot more useful information on it.

I couldn't find anything in the Morale section that talked about the effect of loses on the force as a whole. Even as the Soviets were getting hammered they still just carried on and could theoretically have continued literally down to the last man standing. I hope I'm wrong and I have simply missed something.

I'm not the biggest fan of solitaire play - it just makes me think I'm Billy-no-mates, but it wasn't that bad in this game. Apart from having someone explain to me all the things I was doing wrong (which would have helped a great deal), and having someone else do the thinking for one of the sides, I'd be happy to play thsi again either by myself or with a mate.

And remember - ITVs rock. Have fun

Richard
Posted by RichardC at 11:48 PM