Well over 20 years ago I borrowed a book called "Chieftains" from a mate. It was a good dramatic read, and introduced me to a few concepts that I certainly had never heard of before. I returned the book and over the years had always wanted to read it again - especially in the last 12 months or so.

So on Thursday I once again borrowed the same book from the same mate, who probably found the book in the same spot that he placed it after I gave it back to him 20 years ago!

Here it is looking a little aged: 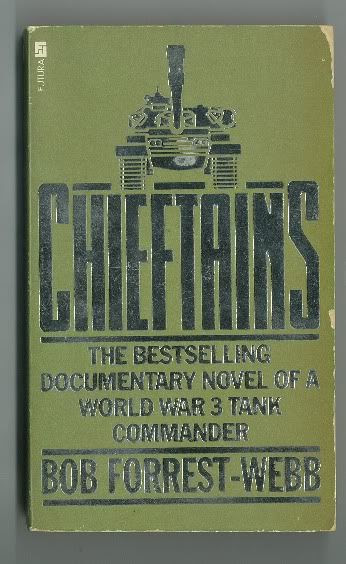 I finished it this morning and thought it worthy of an immediate book review as I think it is a relatively rare book now.

The book was first published in 1982 and describes a Third World War type situation set in around 1985. Whilst not much detail is entered into the reasons why it all kicked off - it appears to begin down in Yugslavia with the Russians intervening and the Americans providing logistical support to the Yugoslavs. As the Western nations have been going through a recession for most of the late seventies and early eighties, defence spending is down and it is implied that this is enough for the Soviet leadership to think "Why the hell not!" and invade Western Europe.

The story follows a number of different people - a little like Red Storm Rising - but only looks at things from the NATO point of view, is generally focussed on tankers, and is primarily about a Chieftain crew in particular.

Whilst the Soviets arn't shown as supermen or super-boogeymen per say - the sheer weight of the Soviet numbers is enough to be constantly driving the NATO forces back for the majority of the book. The book has a certain doom and gloom about it. Nothing is held back - war certainly is hell, and you don't want to form much of an emotional connection to the characters as its highly likely when you turn the next page that they'll die - often a somewhat senseless death.

Mistakes are made, either stupid little ones or massive ones - but it is done in a very realistic, totally beleivable manner. Artillery is massively destructive, gas is used - and I won't tell you what happens in the end - but I'm sure you can guess. Not a happy ending kind of story - a little like reality.

Team Yankee certainly felt a bit cleaner, less mistakes were made and the tactical situations were generally one sided - in favour of NATO. So whilst the story lines are similar - not much else is.

One of the things the book introduced me to all those years ago was the role of the SAS in West Germany in the middle of a Cold War Gone Hot. This aspect of the book is pretty cool, and if it had been written by Tom Clancy - apart from it being all about Americans - this section would have been greatly expanded.

Parts of the book are a little unsatisfying. It kind of felt like it was written to A) like John Hackett's "The Third World War" help convince the government to increase defence spending, B) convince the BAOR to train harder so they don't make stupid mistakes, C) to portray the Soviet Army as the big bad wolf that everyone thought it was in the 70s and 80s which kind of turned out to be not really so true, and D) try and convince everyone to avoid war at all costs (a good idea in my book). As such it was very, very grim.

Some parts seemed a little unlikely, the lack of NATO air support, particularly against massive inviting targets, such as a strategic Soviet bridgehead didn't ring true to me nor did the Soviet use of gas with seemingly no impact of the Russian performance. The timing of the book meant systems like MLRS, DPICM and FASCAM were non exsistent, and the performance of the M1 (refered to as the XM1 in the book) is woefully short of reality - potentially able to knocked out by an ASU-57 or RPG, no Thermal Imaging, no blast bins for the ammo etc. But still not bad for a book published in 1982, which probably meant it was written in 1980 or earlier.

That doesn't for a second mean that as a whole I didn't really enjoy the book. Some of the engagements are written extremely well, and you get caught up in action, especially as the Chieftain moves from firing point to firing point, hammering at Soviet armour and being hammered at in turn. It represent the chaos of battle extremely well.

Overall I think this book is well worth the read. The size of this particularly genre of books is pretty limited to begin with and this is a worthy addition to the panetheon. Its also nice to have a book that is written from a primarily British point of view and is more interested in showing what the authour considered to be the likely realities of the battle rather than having a happy ending.

If you get the chance to read this book - read it.

Richard
Posted by RichardC at 4:37 PM