Table of Organisation and Equipment (TO&E)

So, a word on Tables of Organisation and Equipment...

Starting this week I'm going to begin to a new series of posts on the TO&Es I've been finding/preparing and using in my Cold War games and army lists.  I thought it might be somewhat useful, others might find it interesting and it may allow some feedback which will update my work.

After a year or two of searching the net and books to develop army lists for my Cold War games I've gained a bit of experience into the vagaries of Cold War TO&Es.  You would think it would be a fairly easy task - I mean if you want to find a TO&E for almost any force in WW2, it's a relatively straight forward task.  Forty odd years on and it's not always so easy.

I guess some things are still shrouded with "security" and secrecy and most of the easy to access detail we have of particularly Soviet/WARPAC TO&Es come from de-classified NATO documents which may or may not have been particularly accurate.

Some bits of information on the net can also be slightly misleading.  Take this for example: 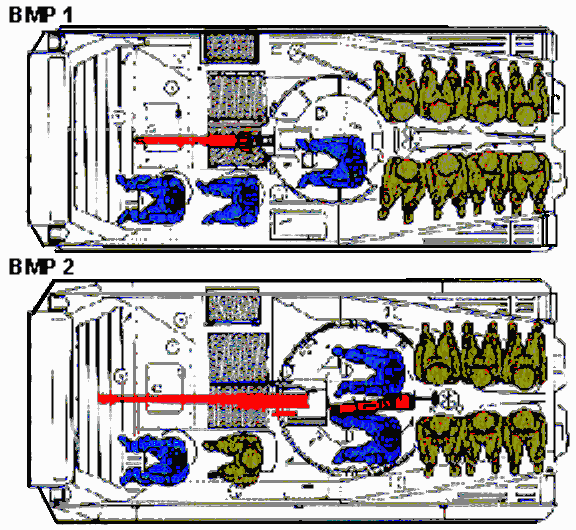 This pic is from the very useful Global Security website.  It shows the maximum capacity seating arrangements for the BMP-1 and BMP-2 IFVs.  Green are your dismounts and Blue are your crew.  This picture implies that a BMP-1 has 8 dismounts, while a BMP-2 has 7 dismounts.

Then you look at this from FM 100-2-3  The Soviet Army: Troops, Organization, and Equipment:

Reading this makes it pretty clear that the BMP-1 should have 7 dismounts, with 2 crew remaining in the vehicle.  So it should look like this:

while the BMP-2, with one less dismount, should look like this:

The BMP-1 has 2 empty seats and the BMP-2 has 1 empty seat.  Most of these will be filled up later - more on that in posts to come.

Another issue is the whole reality versus TO&E.  I once read (and I have no idea where so can't find it of course right now) that in the BAOR (and I assume many NATO armies) units that were at full establishment were actually chronically undermanned.  This was due to men being away through illness, leave, training courses etc etc.  I assume that this would change in the lead up to war and that at least for the first few days, many frontline or reserve units would be essentially fully manned.  This may be massive overreach on my part - and I'd be keen to see what you think.

Again re NATO, TO&Es changed quite considerably in the 1980s.  The Brits went from a squad armed primarily with the FN SLR to the SA-80, from the FN MAG and Carl Gustav as squad support weapons to the LSW and LAW80.  In the same period the US Army added the M249 SAW to their squad TO&E and dropped the M-60 GPMG from the squad to platoon level.  So dependent on the year, the TO&E could change dramatically.

These are a few simple examples of how confusing things can be for a wargamer.  I think I've changed my Soviet list 3 or 4 times over the years to try and deal with things I've stumbled across on the internet.  I'm pretty sure my latest version of the list is probably back to the first one!

So - as the TO&E posts come out - bear in mind a couple of things:
So that's the theory behind what I'm doing.  I hope this helps makes sense of what you seen in my TO&E posts to come - rather than it being just me waffling on!

Richard
Posted by RichardC at 1:23 PM